Holy Week Film Festival: A guide to choosing movies to watch in the lead up to Easter 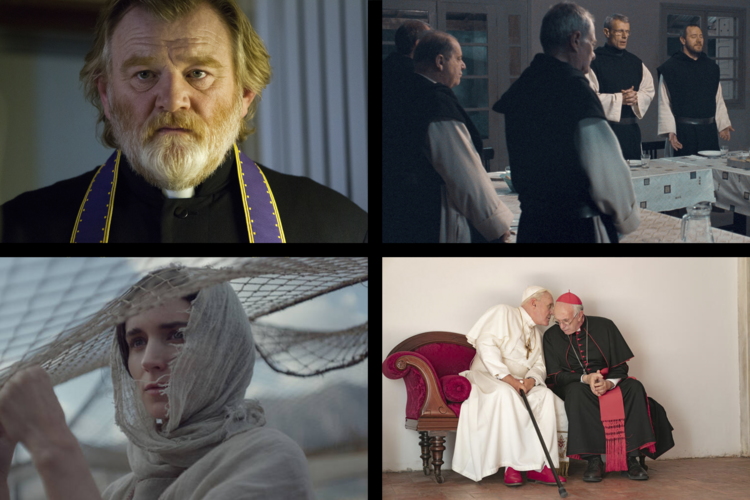 Welcome to Holy Week! How are you celebrating? You might be doubling down (or starting over) on your Lenten penances, looking up special Mass times in the bulletin, or praying that this is the year that Father finally follows the first clause of the Catholic Social Contract: If the Gospel is long, the homily is short.

I’d like to propose a new way of celebrating this holiest of weeks, something that hopefully deepens our Catholic imaginations and prepares our hearts for the Easter season: Watching movies.

Holiday movies are a staple of the Christmas season, and definitely not just during the seven days leading up to Christmas—Hallmark has its “Countdown to Christmas” for its cheesy yuletide rom-coms, and Freeform encourages viewers to celebrate the “25 days of Christmas” by watching movies and TV specials. Yet during the holiest week of the year for Christians, we have mostly failed to create any type of wider cultural traditions outside of going to liturgies during the Triduum (and complaining about Easter decorations going up at Target the day after Valentine’s Day).

A guide for adding some movie-watching to your Easter preparation

I stumbled onto this idea thanks to the Covid-19 pandemic. In March 2020, I realized that my wife, sister and I wouldn’t be traveling home from New York City to Ohio for Easter. And not only would we be deprived of family—we would be deprived of sacraments. During the holiest period of the year, church doors would be closed.

We still wanted to observe Holy Week—so we got creative. In addition to stumbling our way through some D.I.Y. home liturgies, we thought that we could put our Netflix accounts to work for the glory of God, too. So, starting on Palm Sunday, we began a ritual of gathering together around the couch after dinner for a film viewing and an informal discussion afterwards. We called it: Holy Week Film Festival.

In an effort to spread what I hope will catch on as a new popular devotion, I offer below a guide for hosting your own Holy Week Film Festival, as well as a sample schedule and film selections.

This is the appetizer. And you deserve one, especially if you’ve just heard the Passion over Zoom Mass. Catholics love the pope. And what’s better than one pope? Well, technically there is only one sitting pope and another future pope in this 2019 Netflix film starring Anthony Hopkins and Jonathan Pryce. (You can hear our interview with Mr. Pryce about the film for our Jesuitical podcast here.) “The Two Popes” is a delight that both sets the stage (this is definitely a religious activity—how could it not be, that is literally the pope on screen) and eases into the week. There is a scene near the end that involves our titular characters learning to tango that will leave you and yours with a smile on your face.

“Of Gods and Men” tells the story of the martyred monks of Tibhirine, who were beatified in 2018. Abbot Christian de Cherge and his community of Trappist monks in Algeria reckon with the impossible choice of whether to remain with the people they serve at the expense of their own safety. America’s film reviewer, John Anderson, wrote in 2011 that the film “is a Passion play of a very modern sort, one in which each character has to crush the gnawing worm of his own mortality and doubt and thereby remain true to his faith. The result is one of the more profoundly spiritual films of this year or any other.”

[Related: The Monks of Tibhirine: Xavier Beauvois' 'Of Gods and Men']

Tuesday of Holy Week: “The End of the Affair”

On the surface, a film about adultery might seem like an odd choice for our Holy Week Film Festival. Based on the 1951 novel by Graham Greene, this 1999 romantic drama (there is also a 1955 adaptation) starring Ralph Fiennes and Julianne Moore centers around their passionate affair, and the mystery of why it suddenly came to an end. The story is perfect fodder for discussion about love, hate, suffering, promise, betrayal and fidelity.

Look, if you are the type of person in the type of family that can pull off film screenings seven days in a row, all power to you. The rest of us need a moment to sit around and do nothing (or rewatch “The Office” again).

This is one of my favorite films ever—and Pope Francis’s, too. “Babette’s Feast” is likely one of, if not the only, film to be referenced in a papal document. In “Amoris Laetitia,” Pope Francis used the film as an example for the joy that love elicits:

The most intense joys in life arise when we are able to elicit joy in others, as a foretaste of heaven. We can think of the lovely scene in the film Babette’s Feast, when the generous cook receives a grateful hug and praise: “Ah, how you will delight the angels!” It is a joy and a great consolation to bring delight to others, to see them enjoying themselves. This joy, the fruit of fraternal love, is not that of the vain and self-centred, but of lovers who delight in the good of those whom they love, who give freely to them and thus bear good fruit.

Given that on Holy Thursday we remember in a special way the Last Supper, it is fitting that our film for Thursday is centered on a meal.

“Calvary” begins with a jolt. Father James Lavelle hears an anonymous penitent in the confessional announcing that he’s going to murder him in retribution for sexual abuse that the penitent suffered at the hands of a different priest as a young boy. Why Father James, then? He’s told, “there’s no point in killing a bad priest, but killing a good one—that would be a shock. I’m going to kill you, Father, because you’ve done nothing wrong.” “Calvary” is a perfect film for the day that we solemnly commemorate the murder of the great high priest.

[Related: Acts of Contrition: A good priest walks a dangerous road in ‘Calvary.’]

Go to the Easter vigil instead!

After the Easter egg hunt is over and while the ham is digesting, sit down and consider the 2019 film “Mary Magdalene,” which John Anderson called “revisionist and reverent at the same time.” This represents our explicitly Jesus-centered film (see rule No. 5) for Holy Week Film Festival. While Joaquin Phoenix makes for an odd Jesus at times, the film illuminates and gives depth to Mary Magdalene, whose perspective on the Gospel for much of history has been overlooked and maligned.

I have offered five films as a sample itinerary, but that is by no means an exhaustive or inflexible list. Much of the fun is selecting the films, either alone or with friends and family. Below you can find other options to swap in. What did I miss? What films would you include, and on what day? Join the conversation in the comments at the bottom of this article.