Acts of Contrition: A good priest walks a dangerous road in ‘Calvary.’ 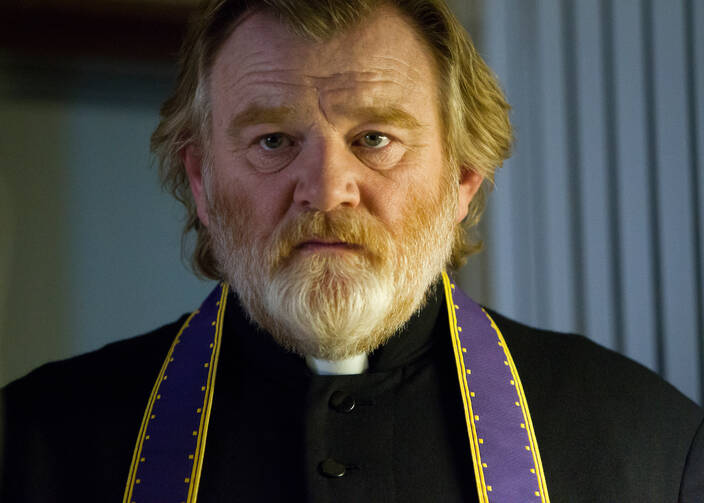 Stark reality meets gentle whimsy. I’d like to think this is a characterization of the Irish temperament and the arts that flow from it; but whether or not that idea has any wider validity, it fits Calvary perfectly.

Another offering from John Michael McDonagh, the writer-director who brought us “The Guard” in 2011, “Calvary” is an intense whodunit set in the kiln of small village life in the west of Ireland. In its opening scene, the hero, Father James Lavelle (Brendan Gleeson) is told in confession he’ll be killed in seven days. The penitent explains to Lavelle that as a young boy he was sexually abused by a priest, who has since died. It’s time for some kind of justice. But, the hauntingly thoughtful voice continues through the grill, “there’s no point in killing a bad priest, but killing a good one—that’d be a shock. I’m going to kill you, Father, because you’ve done nothing wrong.”

Just as he did with the lead character in “The Guard” (also played by Gleeson), McDonagh’s approach to scriptwriting is to build stories around well-developed heroes. Father Lavelle is not perfect, but he clearly is a good priest. This is emphasized by contrast with his strange and sinister parishioners—a brooding publican, a callously masochistic doctor, a homicidal 20-something, a posturing adulterer, a desolate millionaire, a brow-beaten butcher, a deranged male prostitute, a despairing writer and a psychotic serial killer.

The film documents Lavelle’s week after the initial threat. He doesn’t run. He doesn’t call the police. He continues to serve his parish as best he can, attempting to offer his parishioners meaning beyond their struggles.

But this is 21st-century Ireland, wounded and angry after years of church abuses. It quickly becomes clear that the threat of holding this good priest responsible for the sins of his church is nothing new. His parishioners take every opportunity to remind him that he is no longer in charge, that Ireland has changed, that he is seen as a symbol of a broken past, not a hopeful future. What emerges is an image of today’s church struggling to act as wounded healer in a deeply wounded community.

Father Lavelle’s assistant is quite another sort of priest. Where Lavelle, the pastor, is an empathetic widower with a profound spirituality and a commitment to authentic pastoral encounter, his assistant is a caricature career curate, given over to prayer-card piety and trapped in an ideal of detached semidivinity. What begins as an intriguing juxtaposition quickly becomes a satirical look at two competing ecclesiologies.

And so our whodunit fades into insignificance as the complexity of Lavelle’s everyday vocation comes into focus. The parishioners taunt him, as retribution for generations of the church’s abuse of power, with his social demotion. Dialogue after dialogue ends with admonitions like “Run along now, Father, your sermon is finished”; “Your time is gone; you don’t even realize it.” They feign moments of vulnerability and spiritual inquisitiveness before reminding him of their certain doubt and the futility of his hope. In one moment of respite, walking along a country road, he makes friendly small talk with an adolescent girl he comes upon. A car screeches to a stop alongside them, and Lavelle is battered with shouts of abuse from the girl’s father, the way one might chase away a wild animal. At times, this sort of behavior nearly breaks him. This is no super-priest. Father Lavelle is a good priest because he is so ordinary in his vulnerability.

It’s easy to see why a priest in that situation would build walls to hide behind, why he might prefer isolated security over the anxiety of a field hospital (to use Pope Francis’ term for the church), but this is never an option for Lavelle. A priest with a hard-won spirituality built on personal relationships, Lavelle lambasts his curate: “It’s just that you have no integrity. That’s the worst thing I could say about anybody.”

This speaks volumes about McDonagh’s good priest and McDonagh’s good church. As much as they may try to remain impervious, Lavelle’s authenticity (he gets upset and angry when tears and rage are warranted) and unobtrusive care for the people determined to break him speaks truth to them.

An abusive relationship, suicidal depression, financial insecurity, detachment, isolation, doubt, fear—in the midst of all this chaos Lavelle’s parishioners reach out to him. Cracks appear in the facade of absolute self-sufficiency and consumption. A young man, convicted of murder and struggling with psychosis, claws desperately for hope: “But God made me, didn’t he? So he must understand me, don’t you think?” In the second confession scene in the film, Lavelle responds to all this brokenness: “God is great. The limits of his mercy have not been set.”

In a graced moment early in the film, a new widow laments “Many people don’t live good lives. They don’t love. I feel sorry for them.”

The penultimate scene shows Lavelle awaiting his fate on the day he was assured would be his last. Even then the parish’s supercilious millionaire, Michael Fitzgerald, recognizes enough in Lavelle to share his vulnerability: “I had a wife and kids. They meant nothing to me. I have money. It means nothing to me. I have life. It means nothing to me.” As much as they protest, this is a parish hungry for something more and responding to Father Lavelle’s gentle invitation to search for it with him. In their engagement, even in their cruelty, is a sign of hope, where apathy would be more cause for despair.

Bookended by confession scenes, the film itself acts as a sort of confession. It faces the stark realities of life for a person of faith in a post-Christian society, set against a backdrop of abuse, doubt and despair. Yet all this uncovers a depth of hope, born from the longing the characters have for more than their desolation would allow them to believe is possible. The gently whimsical moments point to that hope throughout. In a way characteristic of a culture well accustomed to facing harsh realities, this Irish film explores the richness of struggle alongside the lightness necessary to weather it.

I’ve seen this film twice now, once in a packed cinema in Ireland and once at a preview screening in New York City. I can imagine that as they watched the film, both audiences were filled with very different considerations, bringing very different experiences to bear on what they saw. But when the idyllic Sligo countryside on the screen faded to darkness, both audiences responded with awed silence as they attempted to steady themselves after the traumatic experience of raw honesty.

This is a truly beautiful film; intense, rich and not for the faint-hearted, but a potential experience of grace for a viewer open to it.

Listen to a podcast discussion of 'Calvary.'

Ronan McCoy, a recent graduate of the National University of Ireland, is a summer intern at America.