For John Cheever, ‘mere facts’ had nothing on a good story 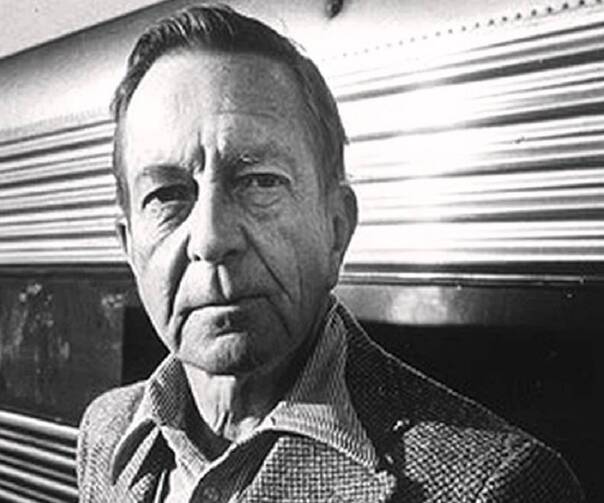 John Cheever in front a Metro North Railroad car not unlike that many of his characters rode to work. (Wikimedia Commons)

Over the course of his long writing career, John Cheever published more than 100 stories in The New Yorker. Readers this week can enjoy an online look at “Reunion,” a short story originally published 60 years ago. And if you’re one of these strange podcast people I keep hearing about, you can listen to Richard Ford read the story aloud in 2007 here. Cheever also published five novels and a number of short story collections, and The Stories of John Cheever won the 1979 Pulitzer Prize for fiction.

Upon his death in 1982, Cheever was called “the Chekhov of the suburbs” for his intimate literary portraits of the joys and struggles of WASPy Northeasterners; in 1964, Time had given him the moniker "Ovid in Ossining" (he lived in Ossining, N.Y., for the last 20 years of his life). The New York Times once described his stories as bleak musings on the “banality and social striving, the emptiness and inebriation” of suburban life. But his work was not all gloom and doom; despite what you think, Rick Moody wrote The Ice Storm, not John Cheever.

John Cheever was often a wry and clever jokester, and many of his stories have a partially hidden narrator who is never not speaking tongue in cheek.

Cheever was often a wry and clever jokester, and many of his stories have a partially hidden narrator who is never not speaking tongue in cheek. If you want to read a masterpiece of the genre, I highly recommend “The Housebreaker of Shady Hill,” first published in The New Yorker in 1956.

George W. Hunt, S.J., editor in chief of America from 1984 to 1998, was a friend of Cheever and a great admirer of his prose style; among Father Hunt’s own publications was a 1983 literary study released shortly after Cheever’s death, John Cheever: The Hobgoblin Company of Love. Hunt continued to write until his death in 2011, and in 2009 he reviewed Blake Bailey’s biography, Cheever, for America.

(If the name Blake Bailey sounds familiar to you, he was in the news last year—first for his biography of Philip Roth that some reviewers criticized for whitewashing Roth’s poor treatment of women, then again shortly after when allegations of sexual misconduct against Bailey himself resulted in W. W. Norton canceling the promotion and distribution of the Roth biography).

Even in the earliest of his stories, Cheever was already moving toward the true subject of his fiction, the often eccentric longings of the human heart.

Because in his own study of Cheever, Hunt had limited himself to the stories themselves, he wrote that he welcomed a full-scale biography. It would not be easy, he warned: “My fervent hope, however, is that any prospective biographer would possess a generous sense of humor and a gracious sort of skepticism, for at one with his many endearing charms, Cheever was something of a boyish scamp at heart and an inveterate teller of tall tales.”

Let the one among us without sin cast the first stone, no? But Hunt suggested John Cheever was even more of a confabulist than most. “He was a storyteller by instinct as well as profession, capable of instantly conjuring up a story from a conversation overheard in a restaurant or shaping an elaborate fable from some personal mishap,” Hunt wrote. “Conversely, he was delightfully vague in discussing any particulars in his life or work, as if mere ‘facts’ had departed his mind forever, unless in the interim they had been re-invented or embellished, transformed by his imaginative filters into story.”

Cheever's description of a young writer: "He appears much alone and determined to instruct himself. Naïve, provincial in my case, sometimes drunk, sometimes obtuse, almost always clumsy."

Bailey exceeded his expectations, Hunt happily reported, accomplishing “an outstanding, exhaustive (but never exhausting), clear-eyed and even-handed biography of Cheever and a literary triumph in its own right.” Bailey “interweaves seamlessly a narrative of events in Cheever’s life with the apt anecdote or quote from a letter or journal entry, allowing Cheever’s own remarkable prose with its distinctive wit, vigor, cadence and economic precision to enliven the factual account.”

Fifteen years earlier, another America editor, John Breslin, S.J., reviewed a posthumous collection of some of Cheever’s earlier work, Thirteen Uncollected Stories. Father Breslin worked at America in various capacities over the years, including as literary editor, but also had a more varied career than your average Jesuit: From 1978 to 1980, he was editor of Catholic Books at Doubleday, and in 1981 became director of Georgetown University Press. He also taught English literature at Trinity College in Dublin, Ire., Georgetown University, Fordham University, Marquette University and LeMoyne College.

Thirteen Uncollected Stories had a difficult gestation and a painful birth; Cheever’s family did not want all his early stories published willy-nilly, as they were not of equal interest or quality. “What began as an act of homage to the memory of a favorite author turned into a legal nightmare for both editor and publisher,” Father Breslin wrote. In the end, a compromise was reached, and a baker’s dozen of Cheever’s early works was released.

“For anyone accustomed to the smooth prose and well-glazed decor of Cheever’s suburban world, these stories, mostly from the 1930’s, may seem rough fare,” Breslin wrote, but also noted that Cheever would not have been fazed to see his early stories in print. In the introduction to his Collected Stories (Guess who wrote the foreword? George W. Hunt, S.J.), Cheever pointed out the value of seeing a writer develop, poking fun at younger writers and, implicitly, himself:

A writer can be seen clumsily learning to walk, to tie his necktie, to make love, and to eat his peas off a fork. He appears much alone and determined to instruct himself. Naïve, provincial in my case, sometimes drunk, sometimes obtuse, almost always clumsy, even a selected display of one’s early work will be a naked history of one’s struggle to receive an education in economics and love.

“Even in the earliest of these stories, Cheever was already moving toward the true subject of his fiction, the often eccentric longings of the human heart,” Breslin wrote. From the very beginning, including in a number of early stories that focused on young gamblers betting their fates away at the race track, Cheever was already developing those “constants” that “anchored his mature fictional world: ‘a love of light and a determination to trace some moral chain of being.’”

One more random Cheever fact: There is a 1992 episode of “Seinfeld” in which Susan, George Costanza’s fiancée, discovers a tranche of love letters…between John Cheever and her father.