Walker Percy, master of prose (and king of snark) 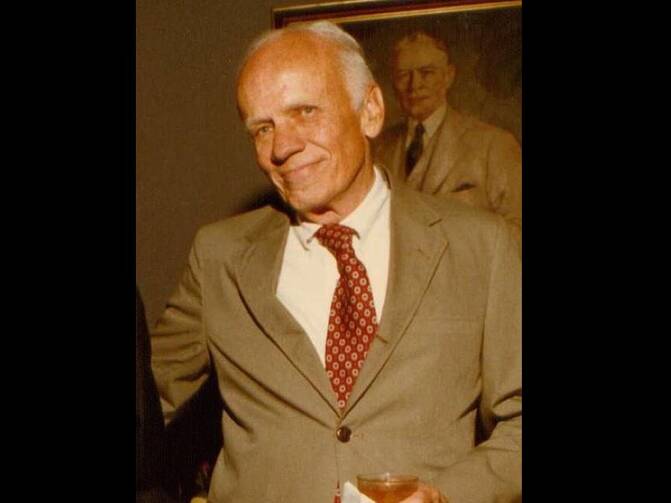 Because America is old (though her editors young?), and because time is a brutal but a careless thief, we sometimes lose track of exactly who has written for us and when. For many decades, the only way to find out if a certain person had been among our contributors was to repair to a Buick-sized metal cabinet in the production office that included alphabetized index cards for every author since 1909. More prolific authors might earn a rubber band or two to hold their multiple cards together; others—like John F. Kennedy—would find their single submission entitled them to one lonely card, shoved between…John F. Kennedy and John F. Kennedy. (There’s a lot of Irish in our 113 years).

That system lasted until just six or seven years ago, when someone born eight or nine years ago decided it could all be better handled by computerized text search, since our archives were digitized years ago. Though I resent this change, the digital search has the advantage of being almost instantaneous—and providing happy surprises.

Walker Percy: "Writers and carpenters had better have respect for the workaday tools of the trade, the feel of the wood under the thumb.”

That was the case a few weeks ago when I went searching for America’s review of Walker Percy’s The Moviegoer, which won the National Book Award for Fiction in 1962. It was Percy’s first novel, but not his last; the prolific Southern writer, who died in 1990, wrote four more novels and more than a dozen nonfiction works, including a scathing mockery of the self-help movement, Lost in the Cosmos: The Last Self-Help Book, and a book of essays put together a decade after his death by his longtime friend and biographer, Patrick Samway, S.J., Signposts in a Strange Land. (Percy also discovered John Kennedy Toole, whose mother gave a manuscript of A Confederacy of Dunces to Percy after Toole's early death.)

Our review was nothing special, but the search bore other fruits: I discovered that Walker Percy himself had written for us a number of times, some book reviews, some articles on sociological or religious topics, some social commentary. Best of all, however, was this 1974 book review of Paul Horgan’s Approaches to Writing. Once upon a time Paul Horgan was an even more famous writer than Percy—he won the Pulitzer Prize for fiction twice—but that’s for another column: Percy’s review is itself a delightful primer on how to write, full of pithy observations about the craft and not without a fair dose of Percy snark.

“Pay attention, says Horgan, to such humble mechanics of the craft as spelling, punctuation, grammar, syntax. Spelling! Groans from the sophomore in Creative Writing already out-Faulknering Faulkner—Horgan is a nag. No, Horgan is right,” Percy writes. “Writing is a craft like any other. Writers and carpenters had better have respect for the workaday tools of the trade, the feel of the wood under the thumb.”

“Writing for a living is, for some reason or other, the only occupation to which people still ascribe a species of demonism,” he continues. “This state of affairs is probably the last legacy of 100 years of bad romanticism, the writer possessed, the writer post-epileptic.”

Walker Percy: "Writing for a living is, for some reason or other, the only occupation to which people still ascribe a species of demonism."

“Most writers, especially fiction writers, have their little eccentricities, lining up pencil and paper a certain way, but these are less apt to be signs of madness than a very human anxiety to preserve what Horgan calls ‘an induced and protracted absentmindedness’,” Percy writes. “Evelyn Waugh once reported that he thought Graham Greene a little strange because he had to run out in the street and wait for a car to pass with a certain combination of numbers on the license plate before he could get to work. But Waugh of all people should have had sympathy for the quailings, twitches and fits which are apt to befall a man trying to write a good sentence.” Zing!

Percy’s friend Father Samway, who for many years was America’s literary editor, eventually wrote a biography of him, Walker Percy: A Life, in 1997. (Here is a nice photo of the two together in 1978 at Percy’s home.) Both Father Samway and Percy were published by Farrar, Straus & Giroux, the venerable publishing house that has featured an intimidating roster of accomplished writers over the years, from John Berryman to Susan Sontag and Joan Didion, Philip Roth, Tom Wolfe, Jonathan Franzen, Robert Lowell, Bernard Malamud, Jeffrey Eugenides, Alice McDermott and Paul Elie. Oh, and Thomas Merton and Flannery O’Connor too. How did the editors gather so much talent in one place? Robert Giroux offered a hint: “The most sobering of all publishing lessons,” he once said, is that “a great book is often ahead of its time, and the trick is how to keep it afloat until the times catch up with it.”

Robert Giroux: “A great book is often ahead of its time, and the trick is how to keep it afloat until the times catch up with it.”

In 2014, Boris Kachka wrote a history of Farrar, Straus & Giroux, Hothouse, which was reviewed by America deputy editor in chief Maurice Timothy Reidy. “To review a book about a publishing house seems a rather dreary assignment,” Reidy wrote. “Who but the most ardent bibliophiles care about print runs and author advances? Does it really matter what appeared in the fall catalogue of 1963? But when the publishing house is home to Nobel Prize-winners and Pulitzer darlings and run by a Guggenheim, well, then things get a little more interesting.”

While the cosmopolitan and debonair Roger W. Straus Jr. was the public face of FSG, his secret weapon was his fellow editor Robert Giroux (whose papers are archived at Loyola New Orleans through the efforts of Father Samway). “A native of New Jersey who attended the Jesuit-run Regis High School in Manhattan, Giroux was confidant and editor to T. S. Eliot and Thomas Merton, among others,” Reidy writes. “He helped bring Seven Storey Mountain to fruition and was among the first to read Catcher in the Rye, a book his boss at Harcourt, Brace turned down.”

There was one book, however, that escaped Giroux’s grasp. “While at Harcourt, he published Jack Kerouac’s first book, though he didn’t know what to make of a second novel the mercurial writer delivered to his offices on a single roll of paper,” Reidy writes. “When Giroux told him they would need separate pages for editing, Kerouac reacted with indignation and stormed off. On The Road was published by Viking six years later.”

It brings us full circle, because I have no doubt that Walker Percy, with his love for such “humble mechanics of the craft as spelling, punctuation, grammar, syntax” and his contempt for the writer “already out-Faulknering Faulkner,” absolutely despised On The Road.