Remembering Charles R. Morris, who wrote about everything (including America Magazine) 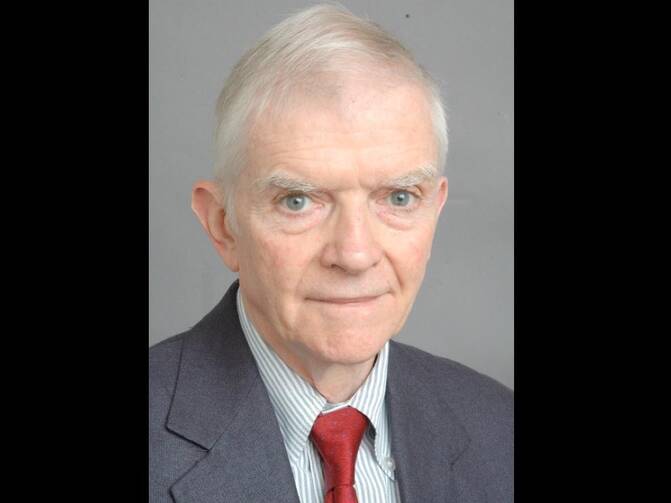 When America was approaching its centenary in 2009, the editors were anxious to have a historian give an unbiased view of our century of publication, something to be included in our 100th anniversary special issue. While a number of historians were among our regular contributors, we wanted someone who would be approaching the material as an outsider, because the special issue was shaping up to be, well, a bit self-congratulatory.

We found the perfect author—among our book reviewers.

Charles R. Morris was known for a great many things more than his literary assessments for America, of course. After he died on Monday, his obituary in the New York Times called him an “iconoclastic author,” and that he indeed was. His first book was a 1980 expose of the corruption and financial waste found in the social welfare programs of New York City; his most famous book was The Trillion-Dollar Meltdown, a 2008 financial analysis that eerily and accurately predicted the economic collapse that devastated the U.S. economy later that year. Other books dealt with topics ranging from the Cold War arms race to the computer wars of the 1980s to the Great Depression to surgical operating rooms.

Born in 1939 in Oakland, Calif., he attended a Catholic minor seminary in New Jersey for high school before moving on to the University of Pennsylvania, where he studied journalism. He later worked as a lawyer, a banker and a government employee of both New York City and Washington State. He had no formal training in economics, and yet proved to be a prognosticator nonpareil of economic trends, drawing the attention of global financiers like George Soros who were astonished at Morris’s prescience.

Many of us at America were also familiar with Mr. Morris’s sweeping 1997 history of the Catholic Church in the United States, American Catholic.

He was also, as mentioned, an occasional book reviewer for America, writing on varied subjects including educational theory, economics and historical biography and showing a breadth of intellectual interests that was mirrored by his 15 nonfiction books.

Many of us on staff at America were also familiar with Mr. Morris’s sweeping 1997 history of the Catholic Church in the United States, American Catholic: The Saints and Sinners Who Built America's Most Powerful Church. The opening pages describe the dedication of St. Patrick’s Cathedral in New York City on May 25, 1879. Mr. Morris notes that while the Gothic-inspired cathedral was depicted in most accounts of the day as complete, in fact the building was still a squat, unadorned rectangle that “hulked blockishly, squaring its shoulders over the tens of thousands of faithful assembling to witness the dedication ceremony.” The money to build had long since run out, and the cathedral had no spires; it would not be completed until 1908.

But with the exception of some notoriously anti-Catholic magazines like Harper’s Weekly and The Atlantic Monthly, Mr. Morris wrote, almost every journal that covered the dedication described the cathedral as complete; some even had drawings of the building that depicted spires and steeples that didn’t yet exist. Mr. Morris’s implied point was subtle but also clear: The unfinished state of the cathedral that day was not as important for the city’s Catholics—nor for the city itself—as the significance of the moment. The Catholics, with their Protestant-designed cathedral on tony Fifth Avenue, had finally arrived.

“Morris’s industry amazed us all,” said Father Martin. “And he soon became a beloved, if not exactly official, addition to the staff."

It is a masterful introduction, and the book is a first-class work of scholarship, insightful but also thorough, and readable throughout. Therefore, we were delighted at the response when James Martin, S.J., then an associate editor, approached Mr. Morris in 2008 about writing a brief retrospective on America for the special issue. Father Martin said that “Charles Morris was our dream candidate for this rather monumental task: he was a brilliant writer who understood the church and also, we knew, would be both fair and scrupulous about America’s not-always-perfect history.”

Not only would he be happy to, Mr. Morris said, but he would come to the magazine to do his research. “My plan was to spend a couple of days in the archives, skimming through issues to pick out what was attracting the editors’ attention decade by decade, and build the piece around that,” Mr. Morris wrote in 2009.

“I duly showed up one day in December, and as soon as I saw the archive, realized I had not done the arithmetic. One hundred years, it turned out, is 4,851 issues; and the early issues were very thick—90 pages or more! Worse, they were interesting. After spending nearly a whole day, I was just starting on 1911. Rapid-fire mental calculations suggested I would still be there in April…or maybe June.”

Mr. Morris claimed that he “finally devised a system involving a digital camera and my laptop, so that I could store lots of page impressions and work on the text at any spare moment in early mornings or late evenings, in airports or dull meetings.” That is not the memory any America editor at the time has of his working style.

Charles R. Morris had enough sitzfleisch for an army.

Speakers of German—or anyone who has worked as a writer, gemologist or chess player—may be familiar with the concept of sitzfleisch. The word is a linguist’s joy—quite literally, one’s “sitting meat”—and speaks to the requirement for certain professions of the ability to spend hour after hour parked on one’s keister, concentrating solely on the task at hand.

Charles R. Morris had enough sitzfleisch for an army. He sat day after day in America’s offices, paging through dusty tomes and taking careful notes by hand. We would peek in from time to time and nervously ask him to lunch or offer to bring him coffee; this renowned financial wizard, we thought, was more like a medieval monk in a scriptorium.

“Morris’s industry amazed us all,” said Father Martin. “And he soon became a beloved, if not exactly official, addition to the staff. He also dazzled everyone by his seemingly effortless mastery of so many topics: economics, politics, literature and of course, church history. He was also one of the most charming and erudite people you’d ever want to meet.”

When the retrospective came out (he finally had to break it into two parts, having realized that 100 years could not be summarized in 4,000 words), it featured all the hallmarks of his style: a preference for larger themes over distinct events, an eye for detail that provided unexpected insights, an uncanny ability to find a pithy quote that could stand in for a paragraph of exposition. Though his tone was upbeat and judicious, he didn’t let America off the hook for its many foibles over the years. It was, in short, trademark Charles R. Morris.

When Mr. Morris died on Dec. 13, the world lost a powerful intellect and a voice for honest, unflinching reporting, a figure whose early training as a journalist informed all the many vocations he embraced over the course of a long and fruitful life. And we at America lost a respected and cherished friend.