‘You can’t find God in following what other people tell you to love’: lessons from my Jesuit high school teacher 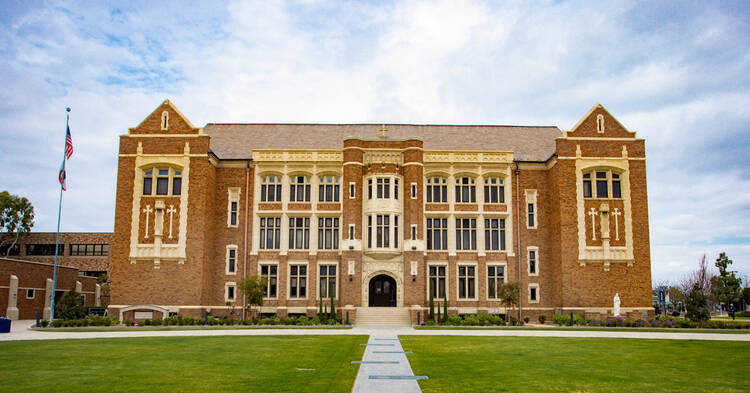 As a 1992 graduate of Loyola High School in Los Angeles, I had Michael Mason as my AP English IV teacher. Mr. Mason, a 35-year veteran of the classroom and the author of How to Write a Winning College Application Essay (4th ed., Random House), is still teaching at Loyola High. The interview has been edited for length and style.

It has been 29 years since I had you as a teacher at Loyola High. That was also your first year.

Yes. This graduating class will be my 30th. I am still teaching AP English IV! This year has been rather different from previous ones. Connecting the concepts behind everything we have taught and learned over the years while dealing with this incredibly bizarre event of Covid-19 has changed teaching dramatically in certain ways.

You went to a Jesuit high school yourself, Bellarmine College Preparatory in San Jose. Are there any teachers you remember from Bellarmine?

Yes, my undergraduate degree is from Boston College, and one of my two master’s degrees is from Loyola Marymount, but I got my start at Bellarmine. Father Jerry Wade is the chancellor there now, but I had him for Latin. I am convinced he is the Benjamin Button of Jesuits, because he seems to get younger every year. We read Cicero, and [Father Wade] was terrific; you could tell he really knew the material, but also that he really knew what he was doing as a teacher. He made the material seem alive.

There was a lot of memorization at Jesuit high schools in those days. One punishment assignment I got was to memorize the Letter of Paul to the Ephesians.

That sort of stuff was still happening when I went to Loyola. We had a great math teacher—Al Martin—who one day drew a sine wave on the chalkboard. The class clown (who is now an Emmy-winning television writer) shouted, “Hey look, it’s Batman!” Dr. Martin assigned him to write 250 words on Batman for the next class—in Latin.

There were a lot of great people at Loyola when I started, of varying ages, and Al Martin was a classic example. A lot of them had been educated by Jesuits, and that helped. The handing off of the baton from Jesuits to lay people is not just a necessary evil; sometimes it is a good thing.

The handing off of the baton from Jesuits to lay people is not just a necessary evil; sometimes it is a good thing.

One of the great takeaways I took from your class was that you introduced us to John Irving’s novels, even though A Prayer for Owen Meany was not likely to be on the AP English exam. I got very into Irving after and have read everything he has written; a few years ago I even got to interview him for America. Do you think the school has been supportive of your own love of literature in your teaching?

Yes, I think some of the stuff we’re able to do in class with imaginative literature gets to the heart of what Ignatian discernment is about. I have my seniors read Walker Percy’s essay “The Loss of the Creature” at the start of the year. It is about finding your authentic self. We also read Chinua Achebe’s Things Fall Apart, Sophocles’s “Antigone” and Shakespeare’s “Hamlet.” They all deal in some way with the masks we put up for the world to see instead of our real selves.

One project I like to do with my seniors after those readings is have them make physical masks—the outer mask is the projection of their public persona, what they let the world see about who they are. We do a “reveal” session where they present their mask to the class and then they have to write a paper on what they discovered. The revelations these kids have about themselves are incredible.

That to me is a kind of Ignatian pedagogy. To “find God in all things,” you have to know how to find God in the first place; in other words, you have to be able to discover things that are divinely wonderful—no matter how scary that process is. You can’t find God in following what other people tell you to love. We don’t discern by listening to someone else and nodding our head yes.

You can’t find God in following what other people tell you to love. We don’t discern by listening to someone else and nodding our head yes.

What has been the highlight for you teaching at a Jesuit high school?

The experiential quality of Jesuit and Ignatian education is vital. I had a sabbatical a few years ago that helped me articulate what kind of community and environment I thought a Jesuit school should aspire to. I visited a lot of classes at two other Jesuit high schools. I saw a literature class where the students were tasked with putting Dr. Frankenstein on trial; I got to see different ways of teaching some of the material I teach, like Tim O’Brien’s The Things They Carried. I saw a lot of different ways of making education more personal.

One skill I learned at Loyola—more a jesuitical than a Jesuit one, probably—was to think fast on my feet, especially while writing. I wrote my AP English IV exam question on Cervantes’s Don Quixote, which I had never read; but the school’s fall musical had been “Man of La Mancha.” One of the Jesuits found out and rolled his eyes. “Don Quixote is a 900-page novel from the 17th century, Keane. ‘Man of La Mancha’ is a two-hour musical from the 1960s. Good luck.” But I did pass, because I had enough of a grasp of the material—and how to write about it—that I could roll with the situation.

Absolutely. A great deal of life, everything from a job interview to a successful communication of your ideas, is about having an understanding of what might be the right points to mention, to emphasize, in order to communicate well with other people. Not faking it, necessarily, but knowing how to present yourself and what material and experiences to draw from.

A thornier question: Where does Jesuit education limp? In what ways can it be improved?

First and foremost, all our high schools need to be coeducational; I think the all-male institution does not work anymore. We are advertising ourselves as a college prep school but our students are not going to colleges that are single-sex. And the more that our young men are made aware that there is another whole half of humanity that is, to paraphrase Balzac, “equal to them in some ways but superior in most,” the better off everyone is.

The Jesuit High School in Florida that welcomed 22 teenagers into the Catholic church this year.
Sean Salai

The question is complicated by the fact that a lot of research shows that single-sex schools are good for women, who benefit from the environment, but not for men. A coed environment changes the dynamic of a lot of things. It certainly has an effect in combating the homophobia that is a subtext at every all-boys school. The school bully doesn’t survive in a coed atmosphere as easily. And young men and women need to start appreciating each other intellectually at the high school level.

The same goes for racial and economic diversity. We have to be careful Jesuit schools don’t become rich, white, Catholic boys’ clubs.

On a different issue, I think everyone involved in Jesuit education needs to be aware of the danger of giving in to fads, whether that be a kind of educational jargon or a sort of “teaching to the test,” when we already have an educational system and philosophy that works very well. Part of that is a question of hiring and priorities. It is hard to keep a great system that works together for a long, long time unless you have people who are consistently aware of the ethos of the place.

We need to ask ourselves all the time: Are we a brand? Are we selling slogans that can be put on a T-shirt? Or are we the inheritors of a philosophy—one that is not necessarily always current but is relevant?