On Broadway ‘In the Heights’ broke barriers and took chances. Can the film do the same? 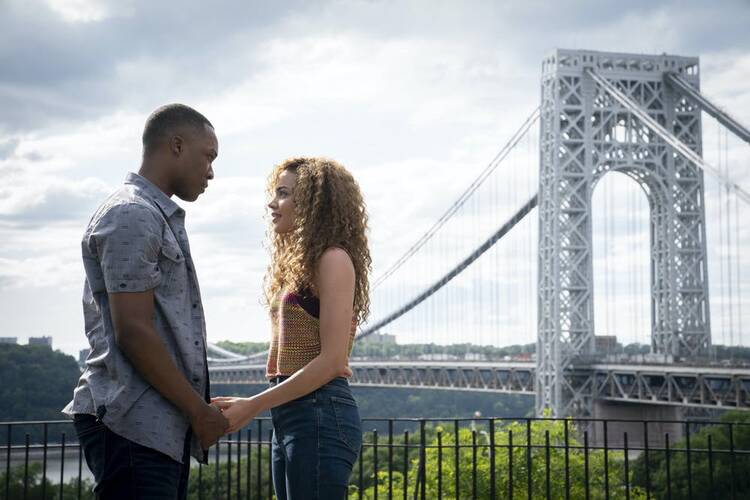 Corey Hawkins as Benny and Leslie Grace as Nina in “In the Heights” (photo: Warner Brothers)

It would be something of a stretch to categorize Lin-Manuel Miranda’s “In the Heights” as juvenilia. It was a huge stage hit, won the Tony for Best Musical, tweaked Broadway conventions while respecting its traditions (“Fiddler on the Roof” was a big influence) and established Miranda as a theatrical force—although one whose genuine masterwork, “Hamilton,” was yet to arise and declare its independence from the dictates of musicals past.

The new movie version of “In the Heights,” directed by John M. Chu (“Crazy Rich Asians”), will be a must-see for fans of “Hamilton,” though they will be immediately aware that its author-composer was in a kind of chrysalis phase. His now-trademark mash-up of hip-hop, American Songbook and even opera (narrative pursued in song-like exchanges, even when it ought to be otherwise) was still finding its footing. Melodic lines will ring familiar to “Hamilton” fans, especially when characters are between what would be defined as “numbers.”

The new movie version of “In the Heights,” directed by John M. Chu (“Crazy Rich Asians”), will be a must-see for fans of “Hamilton.”

Miranda’s composer chops still were developing, as was his sense of balance: Amid the persistent sense of joy one gets from “In the Heights” and its vibrant, salsa-fied, clave-propelled score (it’s a happy movie even when crises occur), there is nothing like “Hamilton’s” uproarious “You’ll Be Back,” which is sung by King George and provides not just comedic but musical relief.

Music aside, Chu’s “In the Heights”—set, like the play, in upper Manhattan on the eve of a blackout and peopled by Hispanics of every origin—is about people rising, or not. Nina (Leslie Grace) is back from Stanford University, which she hates; Usnavi (Anthony Ramos)—whose father named him after the first boat he saw in New York (“U.S. Navy”)—is running the corner bodega but wants to go back to a Dominican Republic he barely remembers. “You have ‘island memories,’” mocks his young friend Sonny (Gregory Diaz IV), who personifies Dreamers and the movie’s treatment of the plight of the undocumented. Vanessa (Melissa Barrera) wants to move to the Village and be a fashion designer; Benny (Corey Hawkins) runs the car service owned by Nina’s father, Kevin (Jimmy Smits), and is crushed when Kevin sells the business out from under him, to pay tuition to a school his daughter doesn’t want to attend.

“In the Heights” has taken a notoriously pothole-strewn route to the screen.

The cast is mostly young and amazing. And the movie is a major failure, for two reasons that almost qualify as tragic.

“In the Heights” has taken a notoriously pothole-strewn route to the screen. Universal originally planned to release a film version in 2011; Harvey Weinstein’s later involvement derailed the project further and Warner Brothers eventually bought the rights for an estimated $50 million. None of this should be an audience’s concern, but viewers may think about it, and the time wasted in developing an adaptation—a visual translation—that does justice to the show.

The success of “Crazy Rich Asians,” which was indeed funny, made Chu a hot commodity. And the idea of a successful Asian director making an all-Latinx movie is certainly press bait. But he seems to have no vision about what to do with a musical. Quite the contrary: Rather than free the show from the stage, he puts it in a kind of box. The visual effect is close to claustrophobic, and viewers may wonder from time to time if there isn’t something going on outside the frame that they aren’t getting to see.

“In the Heights” was important, and is, because it existed at all.

Why are the visuals so relentlessly static, and boring? Why doesn’t the movie soar away from the stage, doing what film versions of stage shows are supposed to do—broaden, rather than strangle, the virtues of the material? What were the filmmakers thinking? Perhaps that shooting in a kind of faux-documentary, realist fashion was more “honest” than something that would have communicated palpable exhilaration to an audience. Which makes it about politics. Which is also where “In the Heights” fails.

When the show opened in New York in 2008, we weren’t in the midst of the alleged immigration “crisis” that so dominates the public dialogue now, and some attempts have been made to update the story to reflect current affairs. But it has been done in a way that sacrifices truth for dramatic convenience. (The screenplay is by Quiara Alegría Hudes, a collaborator on the original show.)

One of the major plot points—we won’t spoil it—has been changed from the stage version, in a way that just seems wrong. Suffice to say, if a neighborhood lawyer is getting close to six figures to resolve a young boy’s immigration status—especially when there are so many hard-working lawyers and organizations doing the same work for next to nothing—it villainizes the lawyer, which could hardly have been the intent of the filmmakers. (Nina’s tuition problems with Stanford are another iffy issue and tend to demonize the university.)

A backstage look at Hamilton, the musical phenomenon
Ciaran Freeman

There are terrific performances that manage to rise above the movie’s stultified look. The fantastic Olga Merediz, as Abuela Claudia, has one of the better voices in a show full of impressive pipes. (Ms. Barrera is one standout, Mr. Hawkins another.) To a large extent, “In the Heights” was important, and is, because it existed at all. It broke barriers and took chances, something to which Chu seems allergic.

There are perhaps three moments when the director takes something like a risk—when Vanessa, the aspiring fashionista, sings in the street and rolls of fantasy fabric unfurl from the rooftops; an ensemble piece in which the characters conjure their own light show out of thin air; and a moment late in Act 2, when lovers Benny and Nina do a gravity-defying dance along the face of an apartment building. Otherwise, we feel like we are in a crowd, maybe on a pre-pandemic subway to Broadway and 181st Street.