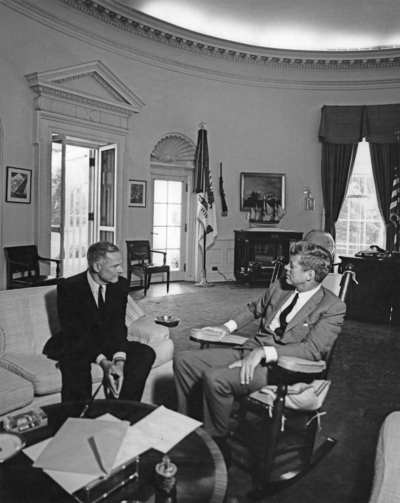 “Hydrogen Chloride” may not be the most endearing of nicknames. It is especially not what one would expect for a pre-eminent member of America’s upper crust, a New England blue-blood with 200 years of civic service in his genes. But such was the moniker bestowed by the diplomatic staff at the U.S. embassy in Saigon on Henry Cabot Lodge Jr. The moniker, derived from his famous initials “H.C.L.,” had very little to do with his personality.

The Last Brahminby Luke A. Nichter

In his new biography of Lodge, The Last Brahmin, Luke Nichter paints the picture of a man who seems to be temporally misplaced but at the same time very much of the moment. Raised primarily by U.S. Senator Henry Cabot Lodge, his grandfather and a famed isolationist, the junior Lodge had all the genteel mannerisms of a Victorian aristocrat operating in the nuclear age. His sense of comportment and dedication to public service drove Lodge to perform his duty—sometimes at a great personal loss.

“Hydrogen Chloride” may not be the most endearing of nicknames. It is especially not what one would expect for a pre-eminent member of America’s upper crust.

Elected to the U.S. Senate in 1937, he resigned to fight in the Second World War. Lodge regained his Senate seat in 1947 and became a committed internationalist, resisting isolationist tendencies. As part of this effort, Lodge drafted then-General Dwight D. Eisenhower to be the Republican presidential candidate in 1952. His total focus on Eisenhower’s campaign resulted in Lodge, outgunned and outspent, losing his own Senate seat to a young Irish Catholic politician in Massachusetts: John F. Kennedy.

Fifty years ago, my father leaked the Pentagon Papers to The New York Times. It changed his life — and mine.
Robert Ellsberg

Lodge spent the better part of the 1950s as U.S. ambassador to the United Nations, with the chief aim of countering Soviet narratives. Lodge was the Republican vice presidential candidate in 1960, but President Kennedy reached across the aisle to call on Lodge to take over operations in South Vietnam in 1963. This is perhaps the most contentious part of Lodge’s life, given his perceived role in the death of the president of South Vietnam, Ngo Dinh Diem. In The Last Brahmin, Nichter presents an expanded narrative with new information on just how much President Kennedy was involved in the affair.

Despite the harshness of the post in South Vietnam, Lodge continued on to two more diplomatic postings: first as ambassador to West Germany under President Johnson, and then as personal representative of Presidents Nixon and Ford to the Holy See.

Nichter presents Lodge as a man who, from cradle to grave, loved his family and his country, the ideals of both of which he tried to live up to his entire life.

Sohrab Ahmari makes the case for traditionalist Catholicism
There is much within Sohrab Ahmari's new book that can and should speak to all Catholics, traditionalist or otherwise. More troubling from a Catholic perspective are Ahmari’s chapters on politics and on sex.
Gregory HillisJune 04, 2021

What an Italian Jesuit (and Georgetown’s ‘second founder’) thought about democracy and religious freedom in America
A Jesuit and an Italian, Giovanni Grassi, S.J., undertook a project to explain the United States to other Italians in 1818.
Michael E. EnghMay 28, 2021

Review: Jewish leaders see providence in Christianity, too.
The decades since the Second Vatican Council and the declaration "Nostra Aetate" have seen much fruit in the form of Jewish-Christian collaboration and dialogue.
Drew ChristiansenMay 20, 2021