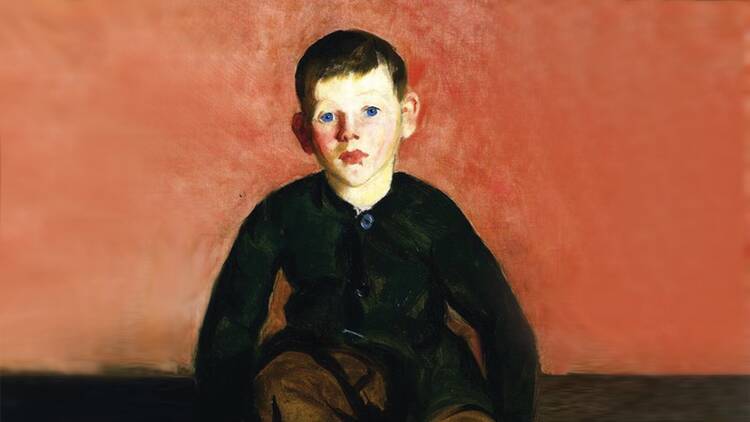 Douglas Stuart’s Shuggie Bain is a cold, damp, bleak read—a long march of a novel marked by glimmers of tenderness on pages filled with pain. In other words, Stuart’s novel is an appropriate winner of the Booker Prize for the desolate year in which March seems never to have ended.

Our protagonist, Shuggie, is a child coming of age in Glasgow in the Thatcher era, wanting against his nature to be a normal boy. His mother, Agnes, is a depressed alcoholic. At one Alcoholics Anonymous meeting, she reluctantly introduces herself, and someone cuts her off: “‘Ego sum in flammis tamen non adolebit,’ [he] said. ‘I am on fire, I do not burn. It’s Saint Agnes’s lament.’”

Over the course of the novel readers will find themselves grinding their teeth as they watch Shuggie and his family on fire, going through one brutal episode after the next. But this novel is one of tender resilience, a resilience that keeps you turning the page. Stuart finds a way to make his depressed characters anything but depressing.

Shuggie is loved—by his mother, his brother Leek and his Grandfather Wullie, family members with noses “large and bony, too severe to be Roman,” inherited from the coast of Donegal, that sit on their faces “like a proud monument to [their] Irish Catholic ancestors.”

Douglas Stuart’s novel is an appropriate winner of the Booker Prize for the desolate year in which March seems never to have ended.

Wullie’s rough, mastiff-like exterior starkly contrasts with the soft contours of his persona. We imagine “his thick arms a tapestry of faded blue ink from his wrist to his shoulder meat” holding his grandson’s little hand as they walk into town. “They walked slowly, swinging between them the Daphne dolly that Shuggie treasured so much.”

When Stuart allows himself to be affectionate and sentimental, he endears himself and his characters to the reader. He lets joy and humor live in a world we should find joyless and humorless.

Stuart does not compromise his characters’ difficult dialect for ease of readability. He forces the reader to speak words on the page aloud, to struggle with harsh Glasgow slang.

“Agnes listened to the man flattening his vowels, spitting out the story as if he were angry, using short familiar words that the Glasgow people had made up. She felt she knew him down to his particular tenement because of how he spoke…. He would never be able to escape the weight of his own accent.”

In embrace of this accent, Stuart creates a novel of queer, working class, Irish Catholic resiliency. It is a prime example of a literary tradition indelibly marked by its relationship to colonialism. Unsurprisingly, once again the Irish diaspora produces one of the year’s best English language novels.

This article also appeared in print, under the headline “Uncompromising,” in the May 2021, issue.