Where is God in classical music? Start by looking for the good, the true and the beautiful. 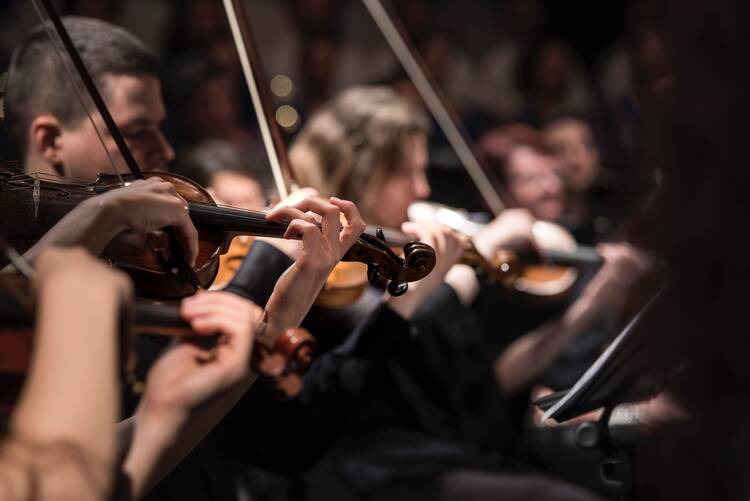 Photo by Larisa Birta on Unsplash

Michael Kurek is an classical music composer and professor at Vanderbilt University. Born in 1955, Professor Kurek earned his doctorate in composition from the University of Michigan and is a past winner of the prestigious Academy Award in Music from the American Academy of Arts and Letters. Mr. Kurek’s 2017 album “The Sea Knows” debuted at Number One on Billboard’s Traditional Classic chart. He is currently completing the fourth movement of his “Symphony No. 2,” expected to release in 2021, and recently authored the book “The Sound of Beauty: A Classical Composer on Music in the Spiritual Life.”

On Sept. 15, I interviewed Professor Kurek by telephone. The following transcript of our interview has been edited for style and length.

In the latter half of the 20th century, postmodernism abandoned unity and form in classical music, leading to a lot of compositional experimentation. What, if anything, was valuable about this period for your own musical journey?

Because it paralleled my journey back to the church, it was useful to see the other side. It was the antithesis that taught me what I didn’t want and made me search for a role model of something I did want to emulate. But you don’t want to be completely derivative, and go back to sounding like Mozart, because as an artist you want to find your own unique voice and not sound like a cheap copy. How to do that was a decades-long process for me.

How do you explain your evolution from modernism and postmodernism to formal narrative traditionalism in composition?

I went by way of France. A stepping stone was to write pieces inspired by the beauty of Debussy and Ravel. I have a composition on my 1996 CD called “Matisse Impressions,” patterned as the soundtrack to two paintings by Henri Matisse. That allowed me to create beauty in the narrative that didn’t sound like a rip-off of Debussy, but gave me a harmonic language and scales in which to write, at a time when I was grasping for whether to go back to C-major. Now, if you listen to my forthcoming symphony, it’s more like Vaughn Williams: there’s more modalism. That’s another stepping stone for me, back to traditionalism, English modalism and folk tunes.

God must have made sound for a reason. In that choice, I think he gave us the gift of another way to experience his beauty.

Your book The Sound of Beauty discusses your search for the transcendentals of the good, the true and the beautiful in classical music. What compositions best evoke those qualities for you?

You can pick something from every era, but the symphonies of Brahms are particularly inspiring to me. He has a very classical, clear logic to the form, and he has beauty in the harmony and melody. The symphonies also have dark moments, but they tend to end with beautiful hopefulness, and a sense of resolution of tension. I’m thrilled after I hear the ending of a Brahms symphony because it lifts me up to a hopeful place, putting me in mind of our journey to heaven. So Brahms would be high on my personal list, although I’m sure anybody else could come up with composers who embody the good, the true and the beautiful. The Lord gives us personal taste and discretion.

What musical techniques do you employ in an album like “The Sea Knows” to evoke the good, the true, and the beautiful?

First and foremost, I use a musical form that has a clear plan. For example, in the Serenade for Violoncello and Harp, you’ll hear three clear themes stated in the first few minutes. It takes a while to get through them and then you hear a classic development section where they get jumbled around and intertwined in dialogue with one another. Then they come back and they’re stated intact, as a kind of coming home. That gives me a framework for composing; I’m not just going by emotion and by randomly saying “well, that sounds good, let’s do that next.” There’s always a musical form that allows me to write a longer piece that hangs together. It’s much like a novel: If you read someone like Dickens, you get the sense he’s got an outline first and then follows it, that he knows the characters he sketched out beforehand.

Some people say they connect more easily to God through music than through the printed or even spoken word. What do you see as the role of classical music in the spiritual life?

Much of the answer to that question remains a mystery to me even after spending six decades trying to figure it out. But I would say God must have made sound for a reason, because he could have made us all telepathic and silent, without sound as a component of the natural creation. But he chose to do that and, in that choice, I think he gave us the gift of another way to experience his beauty. There’s a side of sensuality that’s perfectly fine in a good meal, a beautiful piece of music or a beautiful piece of art in a church. All those pleasing things simply remind us of him and his love. The fact he gave us that is something to give thanks for. Like in Romans 1, it says God should be evident to everyone from creation.

How do you pray with music in your own life?

I pray along with music when it’s playing sometimes, but there’s a more abstract sense that when I’m composing, I go into a zone where the music itself is a prayer. If he who sings prays twice, then he who makes instrumental music prays at least once! There’s a mystical way in which my spirit lifts. To quote Romans, the Spirit groans within us when we lack the words, and there’s a way to become aware of it if you develop the mentality. The problem is so many people take music for granted: It’s all around us, overwhelming and bombarding us even in the grocery store.

The art of really listening—of focusing on the music—is similar to the art of contemplative prayer.

How does Catholicism influence your approach to classical music?

For me, the idea of narrative is symbolic of the human person’s ultimate purpose and quest to be with God in heaven. That keeps me from wanting to write something that sounds clever but random. I’m always aware of music telling a story. There’s also the sacramental symbolism, the elements of immanence and transcendence in music that can be incarnational.

You fell away from Catholicism at 13, spent decades as an evangelical, and returned 12 years ago. Who have been your role models in the faith, either living or dead?

After a poorly catechized childhood, I finally relearned the faith through reading Scott Hahn, and through watching a lot of things on EWTN. But I also read Cardinal Newman’s writings, became acquainted with Catholic studies of Tolkien and C. S. Lewis, and became friends with Joseph Pearce. I read Hilaire Belloc, Evelyn Waugh and so on. Because I’m in the arts and interested in creativity generally, I found especially in Tolkien analogies to fairytales a vehicle to express spiritual truth. In an appendix of my book I look for his musical counterpart.

If you could say one thing to Pope Francis about classical music, what would it be?

Francis is concerned with the chaos of modern life, and with people’s sense of disconnect and alienation from God, and I think the peacefulness and beauty of classical music could be a stepping stone into the contemplative mode of thinking, if people could learn to listen to it. People often don’t listen to classical music without multitasking. The art of really listening—of focusing on the music—is similar to the art of contemplative prayer. To me, classical music isn’t just about taste or Eurocentrism, but a great way to cultivate contemplation.

The idea of narrative is symbolic of the human person’s ultimate purpose and quest to be with God in heaven.

What do you hope people take away from your music?

If I could speak of my upcoming “Symphony No. 2,” that’s the closest thing I’ve done to what I want to do. I want them to fall in love with it and desire to hear it again and again, the way people used to do with their favorite compositions. Many music majors don’t have that “desert island piece” anymore, but to have a piece of music grow into a relationship with you as a friend is something I want people to do with my music.

The other aspect of my book is liturgical. It’s not advocating for one style of music, but for the philosophy that we don’t go to Mass to be entertained. It’s not just for us, it’s for God, and we want the music to put us into a contemplative disposition to receive his real presence in the Eucharist. If the Eucharist is the source and summit of our spiritual life, then how music disposes us to receive it is a huge question for Catholics. The purpose of those Vatican II instructions on active participation in singing was to get the focus off of music as a performance.