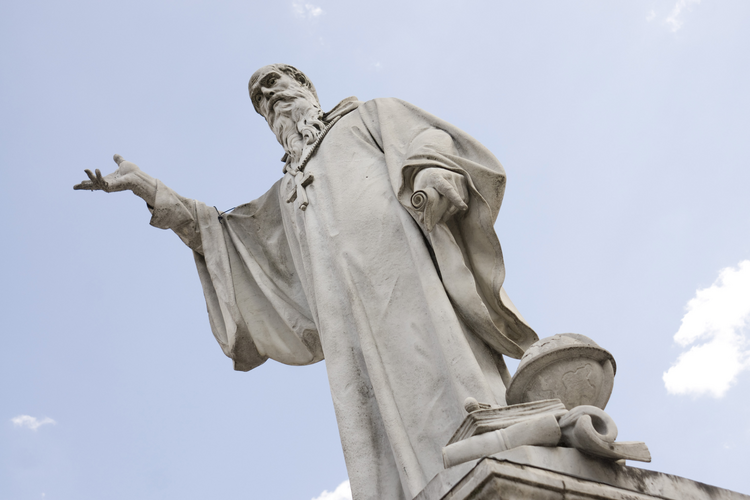 A statue of Saint Benedict (iStock)

A study in 2019 claimed that 20 percent of Democrats and 16 percent of Republicans reported that they “think on occasion that the country would be better off if large numbers of the opposition died.” Given the sour spirit that saturates our political and social atmospheres, perhaps the statistic is not surprising. But it is disturbing. And it raises the question: What is the duty of a Christian in a vitriolic political environment?

In his latest collection of essays, The Way of St. Benedict, Rowan Williams proposes an answer. For 1,500 years, Benedict of Nursia’s monastic rule has guided Christians who seek to conform to Christ in their day-to-day lives. Williams applies Benedict’s eternal wisdom to our contemporary political and ecclesial milieu.

Benedict’s rule rests on three main pillars: obedience, conversatio morum (meaning a commitment to examining and reforming habits that make up our lives) and stability.

Williams homes in on stability as a salve for many of our contemporary ills. Stability offers a countercultural witness to our transient culture. “Benedict regards monastic life as a discipline for being where you are, rather than taking refuge in the infinite smallness of your own fantasies,” writes Williams. Monastic stability is not simply geographic, but essentially communal, “because at its basis lies the recognition that others won’t go away.”

Stability, in Williams’s interpretation, means a commitment to dwelling with the other—even the unpleasant or antagonistic other. It means acknowledging that my own unhappiness will not be solved by the absence of the offending person.

Williams’s definition of stability directly opposes the scapegoating that is the current order of the day. A stable community does not seek to mend disruptions by removing or eradicating the disturbance.

These essays, in part, respond to the idea of the “Benedict option” popularized by Rod Dreher. As a rejoinder to Dreher’s project, Williams argues that a truly Benedictine option does not mean retreating from the wider culture. Rather, Benedict’s rule—particularly the commitment to stability—offers a way of communal life that can accommodate difference and authentically renew any culture in which Christians find themselves.

This was, ultimately, Benedict’s original project—to fuse new life into the world through communities committed to radical love of the neighbor, who will never go away.

This article also appeared in print, under the headline “Call to stability,” in the January 2021, issue.

Renée Darline Roden works as an editor for FaithND and as a playwright in New York City. Her writing has appeared in Howlround, Church Life Journal and Image Journal’s “Good Letters.”