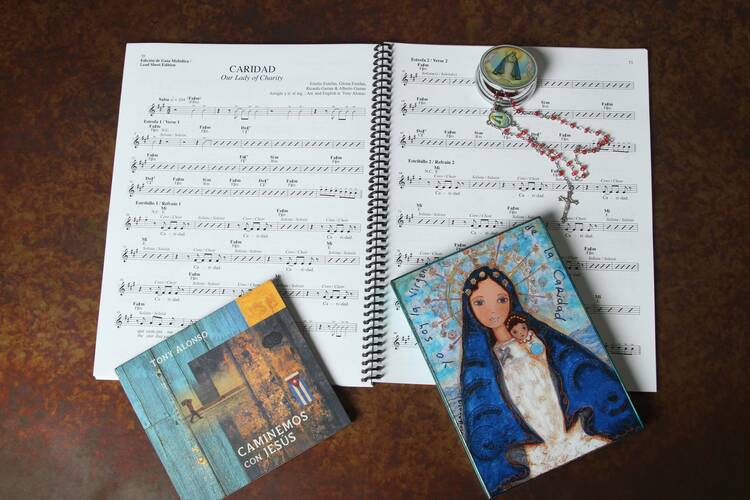 The sheet music for "Caridad," one of the 11 tracks cataloged in Tony Alonso's songbook and on his CD, Caminemos Con Jesús/Let Us Walk With Jesus. Alonso arranged the song as a tribute to Our Lady of Charity, the patroness of Cuba. It was originally written by Gloria and Emilio Estefan and Alberto and Ricardo Gaitán. (CNS photo/Michael Alexander, The Georgia Bulletin)

This year marks the 25th anniversary of the articulation of the theology of accompaniment in U.S. Latino/a theology by Roberto S. Goizueta. His book Caminemos con Jesús: Toward a Hispanic/Latino Theology of Accompaniment formed an entire generation of students and continues to influence the work of countless theologians.

In it, Goizueta lays out a way of being in the world that may have eluded many until 2020’s unmasking of our privilege and complacency. Goizueta writes, “within an individualistic worldview, the scriptural command to do justice—as a necessary implication of our very humanity and creatureliness—is literally inconceivable; instead that command will be interpreted as a mere suggestion that one autonomous individual help other autonomous individuals. Where there is no necessary connection between persons there can be no necessary ethical-political imperative to love others.”

He calls us to an acompañamiento that orients itself fearlessly toward God’s most beloved—the vulnerable of the world—in a posture that walks side by side and carries each other’s burdens. Attentive to their cries, he calls us to give up our comfort and accompany Jesus, who is present in the vulnerable. Accompaniment means having our hearts repeatedly broken as we wipe their blood-stained faces. Accompaniment means inviting Jesus to walk with us because in him is our strength. Accompaniment is sustained encuentro. While it may arise in suffering, because it creates community, it leads to hope.

Accompaniment is sustained encuentro. While it may arise in suffering, because it creates community, it leads to hope.

On this 25th anniversary, Caminemos con Jesús as theology from the margins takes on renewed cultural power. Lifted up by the next generation, it has become incarnate in singer-songwriter-theologian Tony Alonso’s new songbook by the same name. In this ambitious project, kinship is foregrounded and the tradition of Goizueta celebrated. Alonso and I share Cuban roots. To incarnate the theology of accompaniment in the homeland of his father, as Alonso describes it, is to speak the language of the heart.

Goizueta articulated how Jesus’ practice of accompaniment emerged through the experiences of Latino peoples in a U.S. context. Now this theology returns to its roots, enriched by the experience of a new generation and uniting Latin American and U.S. Latinos/as through bilingual songs of faith. Twenty-five years ago, Goizueta distilled Latin American theology’s insistence on living out a “preferential option for the poor.” Today, Alonso embodies it in beauty.

The suite of songs (nominated for a Latin Grammy) and an accompanying album of their joyful performance, produced shortly before our world changed, remind us of the gift of theologically complex art that religious traditions bestow on the world. Through a theological aesthetic approach, the music makes clear that what we may consider Art (in concert halls and museums) often begins with communities simply expressing their faith creatively. This is art: human creation that comes from the heart and moves our hearts.

Caminemos con Jesús resonates in rhythms foundational to Cuban music, incorporating the call and response patterns familiar in spirituals. As Shawn Copeland tells us in Knowing Christ Crucified: The Witness of African American Religious Experience, “the creation and performance of the spirituals were nourished by the African disposition for aesthetic performance—for doing the beautiful—in dance and song.” Similarly, the tragically enslaved African forebears in Cuba spoke through music and dance, giving the world some of the most unforgettable rhythms and melodies ever conceived. Alonso’s music springs from the tradition of the son cubano, and as we sing we feel the music rising, experienced in our bodies and prompting us to dance the Spirit’s hope.

The communities behind Caminemos con Jesús are many. The Cuban rhythms and instruments, the robust layers of theological reflection on Scripture and the insights of popular religion in a bilingual Cuban-American key create the structure. The songbook is an invitation to a formation-in-justice-making-faith for those willing to make themselves present to our moment—and accompanying this moment, to sing its prayers.

Beginning with the joy of walking together to the house of the Lord, we are moved to lift our hearts and seek forgiveness. We become present to the joint cry of the poor and the earth in a song of praise to creation. The titular song follows, which invites us to walk by dancing together as Jesus’ companions in the fullness of the good news he brings.

Alonso also gives us a sending-forth song that proclaims our discipleship, a litany to the Holy Name of Jesus, a hymn to Our Lady of Charity from the songbook of Emilio and Gloria Estefan and a new arrangement of a traditional Cuban Christmas carol: Instead of three kings, the visitors are three peasants. Particularly moving is Alonso’s setting of a Litany of Remembrance and Thanksgiving that highlights the Jesuit martyrs of El Salvador; each is named, as is customary, and the audience answers “Presente.” Here.

What is the next chapter in Cuba’s story?
Margot Patterson

Another community-making achievement is the Litany to the Mother of the Americas, which evokes the rich array of devotions of our continent, beginning and ending with Our Lady of Guadalupe. A stunning bonus is the theme song for the 2020 Los Angeles Religious Education Congress, which in keeping with the teaching of Pope Francisco, presents the life of mercy and holiness as full of abundant joy.

These many months of suffering and loss have given us the opportunity to know vulnerability and see the face of Christ reflected in each other. This is the precious gift of walking with Jesus. As we sing our story together, we awaken to the hope that God is making something new.

As companions on the way,
let us live the words we pray.
With the ones the world has turned away,
caminemos con Jesús.

Cecilia González-Andrieu is a professor of theology at Loyola Marymount University.