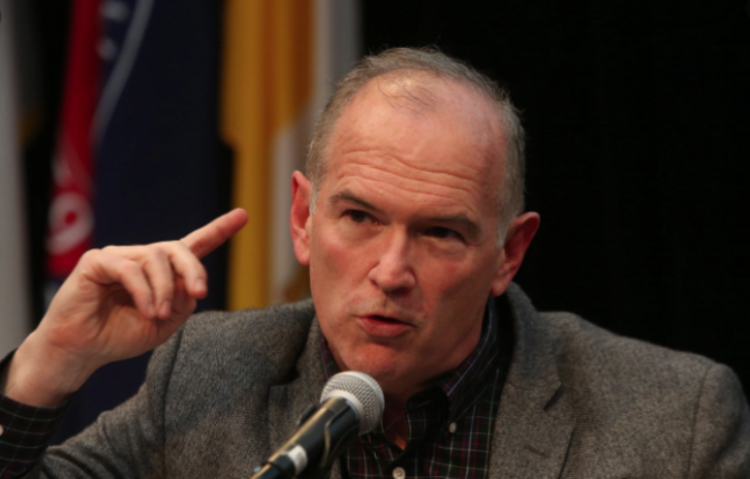 Jim Dwyer, the Jesuit-educated, Pulitzer Prize-winning reporter who covered his native city for New York Newsday, The Daily News and The New York Times in copy sinewed with expertise born of a thousand deadlines, died October 8 from complications of lung cancer. He was 63.

A piece of Gotham died with him.

For the city he covered with compassion, wry skepticism and an ever-level head, his death leaves a cratering hole. For friends lucky enough to know his deep decency and good craic, it tolls an awful silence. Who can write an appreciation for what is lost and lingers but Dwyer himself? His dying is bled through with whatever will become of New York City in the next few years and the general inchoate ignorance and gracelessness of this age. It is cruel that he should leave now.

Dwyer was the author or co-author of six books on subjects as varied as the subway system, the attacks on the World Trade Center and wrongful convictions. That range of subject matter revealed his formidable intelligence, investigative chops and ability to digest technical subjects and turn them into devourable narrative.

For the city Jim Dwyer covered with compassion, wry skepticism and an ever-level head, his death leaves a cratering hole.

But he is most beloved for his newspaper columns. A reporter-poet in the lineage of Jimmy Breslin and Pete Hamill, Dwyer was the most disciplined and graceful of the line. In tight prose reverberating with his ancestral Irish, he chronicled the city. He was a Catholic writer not just by creed or cradle, but by vision. It is fitting that he was the city’s first subway correspondent and turned that expertise into his first book, Subway Lives. He wrote with a bedrock understanding that the people of the city belong to one another, that the system—transit or social—must work for all. His columns were placebound and numinous, able to see the prosaic infused with the divine.

His post-9/11 series “Objects” sketched the talisman-like quality of the items survivors carried on their walk out of the ash: a plastic cup, a window-washing squeegee. The finely-educated son of working class immigrants, Dwyer retained a certain blue collar ethic: His writing was honest labor, the sledge and the pickax replaced with a pen. But what skill! His sentences were finely tempered daggers.

Dwyer's beat was the soul of New York. In a mercantile city, Dwyer carried the brief for the human, the holy flesh and blood of ordinary lives. His writing vibrated with a sense that the city’s full history, beautiful and painful, ignoble and honorable, was still present, a current just beneath the day’s news. It was not nostalgia. It was memory, a notebook full of concrete details breaking through into the now—and it was a Celtic acceptance that this world is thick with other ones. We wade through this other city with every step. Still, he had a reporter’s ability to sight baloney a mile off.

In a mercantile city, Jim Dwyer carried the brief for the human, the holy flesh and blood of ordinary lives.

Where is Jim Dwyer? September into October he is at Memorial Sloan Kettering, unfathomably beyond the reach of language, in a weeks-long pause between stations while a hundred ink-stained wretches struggle to find the words for the mundane ineffability of his departure. What is York Avenue in that loop-around by the 59th Street bridge but a place you stutter and cry and think of the city’s impending impoverishment? All the other deaths run into this death and no incantatory words are able to stop a damn one of them. And now the train is moving again. He has slipped into that other city.

Where is Jim Dwyer? He is at Ground Zero. Studying the temperature of burning jet fuel, reading the FDNY radio contracts, tuned to the grief and shock but also awed by the acts of sacrifice and generosity. He is breathing in that poison air and exhaling words like cut crystal.

Where is Jim Dwyer? He is rolling his bright eyes just enough for you to notice, offering a quiet word of advice. Dwyer was more generous than his prestige required. He was steady, grounded in a way that felt old-fashioned. Six decades on Manhattan sidewalks and he retained a just-suppressed smile.

Where is Jim Dwyer? He is in Upper Manhattan, calculating the parabola of the stonework on the Highbridge, finding a metaphor for the public good.

Jim Dwyer employed a style of journalism—local, reported, both restrained and focused—that is passing out of the world.

Where is Jim Dwyer? He is keeping an appointment to talk to my students, all Black and Latino, about the failures of reporters, including him, in the Central Park Five case and about the good journalists can yet do—on a deadline day when he has been pulled into impeachment coverage.

We mourn not only him, but the newspapering that gave him to us. It is a style of journalism—local, reported, both restrained and focused—that is passing out of the world. We do more commentary now, navel gazing and cheerleading, delivering news to pre-selected camps. Jim Dwyer reported not for one part, but for the whole.

Where is Jim Dwyer? He is showing up. Holding a bag of groceries on Wayne Barrett’s stoop the cold night the great reporter died, waiting there for Barrett’s widow to get home. They were not best friends, but it was not right that she should come home to an empty house. And so he is waiting in the January dark.

We won’t see the likes of him again.Slán abhaile. Safe home.

Eileen Markey teaches journalism at Lehman College and is the editor of an anthology of the work of investigative reporter Wayne Barrett, Without Compromise: The Brave Journalism That First Exposed Donald Trump, Rudy Giuliani and the American Epidemic of Corruption. (Bold Type Books/Hachette)