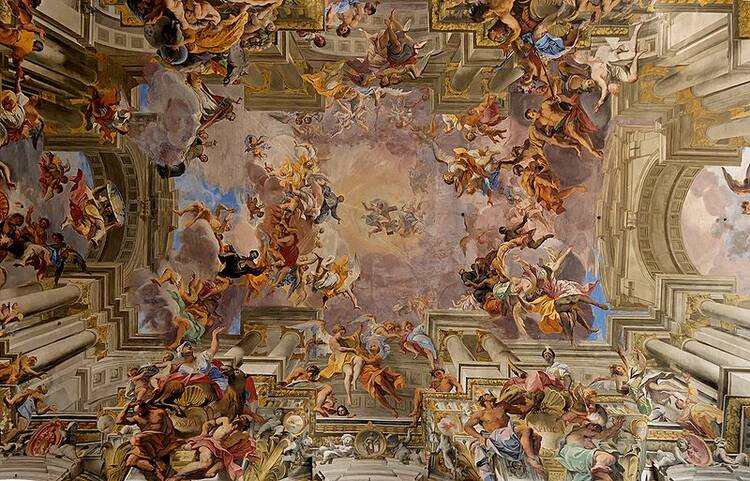 "The Triumph of St. Ignatius" on the ceiling of San Ignazio, Rome (Wikimedia Commons)

The worldwide census of Jesuits reached 36,000, its historic peak, in 1965, we are reliably informed by John W. O’Malley, S.J., in The Jesuits: A History From Ignatius to the Present. That year was also my busiest year as an altar boy at the Church of St. Ignatius Loyola in New York City, the magisterial Jesuit presence on the Upper East Side of Manhattan. Often, two side altars were deployed along with the high altar so that three Masses could be said at the same time, keeping the queue of priests moving.

As an 8-year-old boy, kneeling on the Carrara marble steps awaiting my cues to ring the bells, I often gazed up at three murals in the apse. Each depicted a chapter in the story of St. Ignatius, the Basque founder of the Society of Jesus. Two were evocative enough, if a bit dull—Ignatius, with some of his early followers, kneeling before Pope Paul III to get permission to start the order; and Ignatius on the day of his canonization, lolling on a celestial cloud cushion in heaven. But I never tired of the drama in the first mural: it showed Ignatius, then a soldier known as Iñigo, his leg wounded by a cannonball. As he is being bandaged on the ramparts of Pamplona, the invaders swarm a few feet beneath him. Even so, Iñigo is sitting up, giving orders to his men, his left hand pointing. It was during his long recuperation from this injury that he decided to abandon his life as a soldier and courtier and begin a quest for meaning. Hence the Jesuits.

Ignatius and the company of men he founded in 1540 loom over nearly five centuries of history, no less than they did over a small boy kneeling at a grand altar. Two recent books, O’Malley’s and another by Luke J. Larson, capture parts of the Jesuit experience through different instruments: O’Malley by a telescope and Larson by microscope.

O’Malley, the leading academic historian of the order and a Jesuit, sprints through 500 years in 160 pages that do “little more than glide over the surface of a long and complex history,” he says. That is accurate but understates his accomplishment in The Jesuits.

Larson gives a personal account of a 500-mile pilgrimage across northern Spain that he made with his wife in Keeping Company With Saint Ignatius: Walking the Camino de Santiago de Compostela. A former Jesuit seminarian, Larson has an engaging, down-to-earth voice that made it possible for me to read passages that might otherwise have been so intimate as to be inaccessible—like invitations to and from Ignatius, Jesus and Mary. I read him while preparing to make my third trip on the Camino and relished his descriptions of the serendipities and pleasures of fellowship on its many miles. They met complete strangers along the way who had already heard about him and his wife, Evie—“that couple from North Dakota”—through the pilgrim grapevine. Blister remedies were swapped with other travelers, as were tips on stuff to unpack, things to read and places to eat, sleep or see. They ran into a Canadian man at a village wine tap a week after seeing him start on the journey with his daughter. Now he was traveling alone as she had gone on ahead with younger people. They prayed for father and daughter. Larson’s keen eye for the sanctity of everyday life, his good humor and his ear for lore of the camino make Keeping Company With Saint Ignatius a consistently rewarding read.

For those who have merely heard of the Jesuits, and even for those who grew up among them, O’Malley, a Georgetown professor, proves to be a winning, informed guide. He leads us through the order’s shifting view of its missions and documents the resilience that has kept it relevant through generations of expulsion, suppression and rivalries. Considering that Ignatius’ own correspondence runs to 12 volumes, O’Malley’s conciseness is a blessing.

Two characters stand out. The first, of course, is Ignatius. Marooned and bored at his family’s home in Loyola with his leg wrecked by the cannonball, he discovered the only things to read were a life of Christ and a book about the saints. He found serenity in the examples of Saints Dominic and Francis of Assisi, whereas the thought of going back to the high life of a duke’s court left him “dry and agitated in spirit.” O’Malley writes, “This process of self-examination by which he arrived at his decision became a distinctive feature of the way he would continue to govern himself and became a paradigm of what he would teach others.”

While staying at Manresa, a small Catalonian town near Barcelona, Ignatius took up extreme versions of physical “austerities”—self-flagellation and prolonged fasting—that were seen as pathways to holiness. These rigors led him to suicidal thoughts. Easing up made him feel better, at peace. “A significant moment had been reached in the history of Catholic piety,” O’Malley writes.

Instead of invoking monastic traditions of withdrawal from the world, Ignatius and the other early Jesuits placed high value on the richness of conversation, of art and reading and education. They would travel and preach. The world, after all, had been made by God; and, as Jerónimo Nadal, an early collaborator of Ignatius, said, “The world is our house.” He might as well have also said it was their schoolhouse. A decade after the founding, Jesuits began to open schools and universities. Education remains the most vibrant thread in the order’s DNA. Long after I served my last Mass, Ignatius leaned into my life through his progeny at a Jesuit high school and college. Jesuits and their lay colleagues taught me how to make a layup in basketball and critically read Walden Pond and how covalent bonds knit the physical world together.

Ignatius suffered his war injury about 80 years after Gutenberg built a printing press, so the Society of Jesus emerged as books were becoming part of everyday human life. Ignatius installed a printing press at the Roman College to keep textbooks affordable. The first book printed in India was a catechism by the missionary St. Francis Xavier. When 22 Jesuits sailed for China, they brought a library of 7,000 volumes. Just as young people born into a computerized world are called digital natives, the Jesuits were literacy natives.

The order’s tradition of robust inquiry inevitably led to tensions with orthodoxy and power. O’Malley can barely catalogue all the expulsions and suppressions; his subjects are history’s own scofflaws. Restored to papal favor in 1814 after a near-death suppression, the order sought security in alliance with the values of a fading ancien régime. “Although there were exceptions,” O’Malley writes, “the Jesuits of the nineteenth and early twentieth centuries were inimical to the values of ‘the modern world’.”

That had started to change by 1965, when Pedro Arrupe was elected superior general of the Society of Jesus. The Second Vatican Council was ending; Jesuits wanted to embrace other religious traditions and to act more forcefully against injustice. Arrupe supported these initiatives as members of the Society took to new ramparts with ingenuity and bravery, the elbow grease of moral purpose. They served refugees and displaced persons in 50 countries, urban students in the United States with the Cristo Rey schools, the poor in Central America and elsewhere with education and spiritual solace. “Between 1975 and 2006, forty-six Jesuits died violent deaths, most of which occurred because their efforts in trying to improve the situation brought them into conflict with vested interests,” O’Malley writes.

In Arrupe’s 16 years as leader, O’Malley says, he became “perhaps the most beloved and admired general of the Society with the exception of Ignatius.” When he fell ill, the successor he had designated was not permitted by Pope John Paul II to take office, a move that shook the Society. Though equilibrium returned, skirmishes continued in academic departments and publications over where the boundaries of legitimate inquiry and debate should be drawn. These, alas, are not aired at all by O’Malley, gaps I attribute to his estimable brevity.

Society membership is now less than half its peak of 50 years ago, a decline that would surprise no one today. But it surely would have startled the Jesuits who lined up to get an altar at St. Ignatius in 1965. And they would have been astounded that the cover of a history of their order would feature pictures not only of Ignatius but also of Francis, the first Jesuit to serve as pope. His election surely prompted O’Malley and his publisher to rush out this fleet work, jammed with rewards—though with hardly anything about the new pope. Don’t blame the author.

“The members of the Society were as utterly surprised by the choice as was everybody else,” O’Malley writes, “and perhaps more so.”

This article also appeared in print, under the headline “Following an Order,” in the October 12, 2015, issue.

Jim Dwyer, graduate of Loyola School and Fordham University, is a Pulitzer Prize winning columnist at The New York Times and the author of More Awesome Than Money.