Georgetown coach John Thompson loved his players, his city and the Blessed Mother 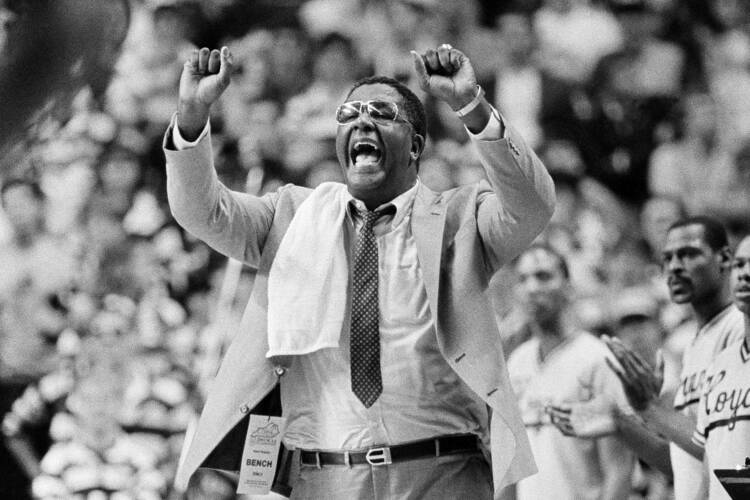 In this March 30, 1985, file photo, Georgetown coach John Thompson shouts to the floor during the Hoya's NCAA semifinal game against St. John's at Rudo Arena in Lexington, Ky. (AP Photo/File)

Like countless other graduates of Georgetown University, citizens of Washington, D.C., and lovers of the game of basketball, I was deeply grieved to learn of the death of coach John Thompson Jr. He was a man of great accomplishment: a legendary basketball coach, a prominent citizen in the life of our capital city, a champion of racial equity and inclusion and a model for all young people trying to imagine what to make of their futures. I feel a hole in the fabric of all our lives.

During my first year as the president at Georgetown University in 1989, in the middle of John’s tenure as head coach of the men’s basketball team, I vividly remember learning that the Denver Nuggets were recruiting John to become their general manager. Thinking it more than unlikely that I could strong-arm John out of leaving the university, I simply asked him several questions: Where would the greater stress be? Would he miss developing his young players? What did the family think? When I arrived a few days later at the gym for John’s press conference about his decision, Frank Rienzo, our also legendary athletic director, told me he thought it might be good to take the grin off my face and let John himself make the announcement that he was staying at Georgetown.

His family’s statement on the occasion of his death said it best: “He was a historic shepherd of the sport.” I would underline shepherd.

Perhaps this decision was unsurprising, given that John was a Washingtonian to his very core. He was born in Washington in 1941. Exceptionally tall (6 feet 10 inches), he was recruited to play basketball at Archbishop Carroll High School. There, he led a team that also included the future president of the University of Notre Dame, Edward “Monk” Malloy, to three straight city championships, including an undefeated senior year. John received a scholarship to Providence College, where he led the Friars to their N.I.T. championship in 1963 and first appearance in the N.C.A.A. tournament in 1964. That year he graduated with a degree in economics and was named an All-American. After two seasons with the Boston Celtics, he returned to Washington and coached at St. Anthony High School, posting a 122-28 record there.

In a not small gamble, Georgetown’s Robert Henle, S.J., hired the young coach from St. Anthony’s in 1972. The basketball team had a 3-23 record for the previous season. Three years later, John’s team made the first of 20 trips to the N.C.A.A. tournament, including a streak of 14 consecutive appearances.

In the mid-80s, as a member of the board of directors at Georgetown, I knew John when he took the Hoyas to the Final Four of the N.C.A.A. tournament in 1982, 1984 and 1985—winning in 1984 with Patrick Ewing as his star center and becoming the first Black coach to lead his team to a national championship. He resented the attention this brought him, believing that many other Black coaches could have done as well had they been given the right opportunities.

[John believed] that many other Black coaches could have done as well had they been given the right opportunities.

“Coach” saw the power of basketball to give disadvantaged young men access to a better life. As his reputation grew, he took the platform readily to demand better educational and career opportunities for Black athletes. His discipline was rigorous; the team never traveled except in coat and tie. Mary Fenlon, a former nun he had known at St. Anthony’s, became the students’ famous academic guide, helping the team achieve a remarkable academic record: 75 out of the 77 players who stayed for four years at the university received degrees.

Around a man as big as John—in every sense—there cluster countless memories. Another I cherish, though it involved great disappointment, is of the Big East Championship game on March 9, 1996. With four minutes left to play, we were leading Connecticut 74-63. As I walked down to the court on the way to the locker room to congratulate the team, the lead had dwindled to two points and was then erased as Ray Allen hit an off-balance two-pointer to steal what had looked to be our seventh Big East Championship.

In the locker room, Patrick Ewing, on a night off from the New York Knicks, sat with his head between his knees, Mary Fenlon looked as though both her parents had died, and John was silent stone. I said something to the young men about every Hoya in the United States being proud of them.

The next night John called—to apologize for his silence, he said—and told me he had never been so proud to serve Georgetown as in that moment. (A Washington Post reporter had taken to saying I did not seem to get along as well with John as had my predecessor.)

He was not only committed to his players. He loved them.

He was not only committed to his players. He loved them. He wanted larger lives for them. When Allen Iverson was on the verge of declaring for the N.B.A. after his second year at Georgetown, I know how John grieved—not for the loss of a star who might bring us another championship but for someone who needed more guidance on the way to his true self.

And so it was painful for us all when John decided to resign in 1999, shortly after his divorce from his wife, Gwen. That year, he was inducted into the basketball Hall of Fame. The fire of his ambition for his players was not abated, and he championed his assistant coach, Craig Esherick, as his successor at Georgetown.

John became the presidential consultant for urban affairs at the university and then a sports talk radio host. He took great pride in seeing his son, John Thompson III, succeed Craig as head coach in 2004. Throughout it all, he remained a singular presence in our nation’s capital. Even last year, he was seen on the baseline of Georgetown basketball home games. And now there is at Georgetown the John R. Thompson Jr. Intercollegiate Athletic Center that memorializes him.

But his family’s statement on the occasion of his death said it best: “He was a historic shepherd of the sport.” I would underline shepherd. And in entrusting him to God, remember that when he wore a blue shirt while coaching, it was in honor of the Blessed Mother—and that he prayed the rosary regularly.