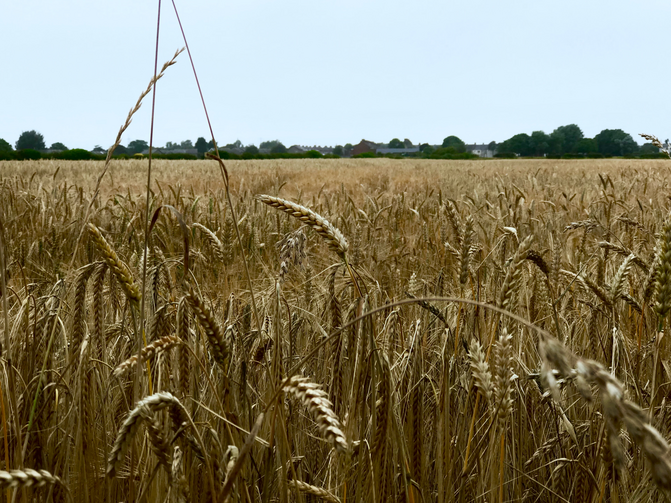 At its core, Marie Mutsuki Mockett’s American Harvest is a book about reconciliation: reconciling the dissonance between urban and rural communities; reconciling evangelical skepticism toward science with reliance on modern farming techniques and genetically modified crops; and—most important—reconciling faith and doubt.

Nine years after Mockett, an Asian-American author from San Francisco with little to no farming experience, inherited her family’s 700-acre wheat farm in Nebraska, she decided it was finally time to answer a question that had nagged her for decades: “Why are our farmers and harvesters, who are conservative Christians, okay with GMOs, while people in the city, who believe in evolution, are obsessed with organic food?” Taking up an invitation from a family friend to accompany his crew on their annual harvesting route through “the flyover states,” Mockett sets out to experience an American wheat harvest firsthand.

Marie Mutsuki Mockett: “Why are our farmers and harvesters, who are conservative Christians, okay with GMOs, while people in the city, who believe in evolution, are obsessed with organic food?”

From bleeding sunsets in Texas to golden wheatfields in Oklahoma to the rolling plains of western Nebraska, Mockett documents every stop in the wheat harvesters’ odyssey with striking lyricism and intricate detail. Her writing effortlessly summons these diverse landscapes into the reader’s imagination, revealing the overlooked yet enduring beauty of America’s heartland. Take Mockett’s magical description of the Grand Tetons emerging on the horizon during the Great American Eclipse:

Three triangular giants of granite puncture the ground. Their feet are invisible, but the tips of their raw teeth are illuminated in rose light. They are like objects behind a scrim, performers who were invisible until now, when the fragile time between day and non day is spread thinly enough over the horizon that we can see the jaws of the Grand Tetons yawn open.

These portraits, combined with Mockett’s painstaking efforts to capture the harvesting crew’s group dynamics and assorted Christian convictions, give American Harvest a uniquely literary journalistic quality—one that harkens back to the beautifully informative accounts of prairie life by Willa Cather or Laura Ingalls Wilder.

Keeping her heart attentive to every nuanced belief system she encounters allows Mockett to start seeing a more colorful world—one where national narratives about places do not tell the whole story; where doubt is a healthy fixture of faith; where “being like Christ is not about making people think like you, but loving people as they are, wherever they may be.” And perhaps, it is a world that is capable of reconciliation.

This article also appeared in print, under the headline “East of Eden,” in the June 8, 2020, issue.