Is ‘Mrs. America’ the most feminist show on television right now? 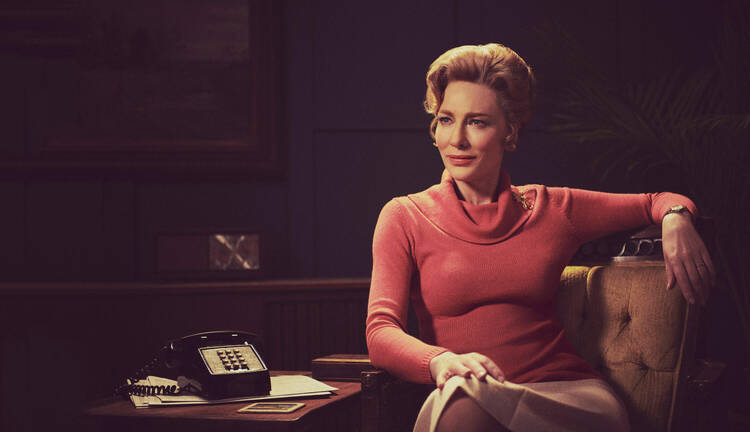 “Mrs. America” is the best political drama on television right now, and perhaps the greatest feminocentric period piece to date.

The FX-Hulu miniseries, created by “Mad Men” alumna Dahvi Waller, follows the rise and fall of second-wave feminism in the United States, as well as the emergence of the religious right and modern pro-life movement, by spotlighting the surprisingly contentious battle to ratify (or bury) the Equal Rights Amendment. Clawing her way to the center of the debate is Phyllis Schlafly (played by the two-time Academy Award–winner Cate Blanchett), a conservative and a Catholic, mother and anti-feminist, who led the charge against the ratification of the E.R.A. in the ’70s.

There is a lot to love about “Mrs. America.” First, the show’s cast is phenomenal. Cate Blanchett is mesmerizing in her role, capturing Schlafly’s equally dynamic and polarizing national presence, while also switching seamlessly from icy sophistication and calculating wit to softer moments of guileless embarrassment and resigned defeat. Every scene she is in leaves an impression.

“Mrs. America” is the best political drama on television right now, and perhaps the greatest feminocentric period piece to date.

On the other side of the aisle, Rose Byrne dazzles as a determined yet weary Gloria Steinem; Margo Martindale delivers another indelible performance as lawyer and New York Congresswoman Bella Abzug; and Uzo Aduba soars as Shirley Chisholm, another New York congresswoman who was the first woman and black candidate to run in a U.S. presidential election—and easily the most sympathetic, inspiring character in the entire series.

Remarkably, despite its giant ensemble of feminist icons and anti-E.R.A. housewives, “Mrs. America” never feels overcrowded. This accomplishment is due in part to the cast, who seem to be working together to collectively elevate their performances, rather than trying to outshine one another.

Credit should also be given to the show’s mature, nuanced writing. Nearly every female character is three-dimensional with perceptible thoughts, opinions and life experiences, regardless of the amount of screen time they are given. As a result, the writers are able to utilize these fully realized, complex characters to explore different dimensions of the tumultuous political era “Mrs. America” is set in—in particular, how identity politics contributed to both naming and obscuring the patriarchy in Washington.

Nearly every female character [in "Mrs. America"] is three-dimensional with perceptible thoughts, opinions and life experiences, regardless of the amount of screen time they are given.

It is worth noting that the most-cited criticisms against the E.R.A. (for instance, that it could take away American women’s “special privileges,” such as exclusion from the military draft) can be traced back to Schlafly, whose 1972 newsletter “What’s Wrong With Equal Rights for Women” opened the floodgates for denouncing the “women’s amendment.” (For the record, America printed one pro- and one anti-E.R.A. article in 1975 and published an editorial against the E.R.A. in 1983, arguing that the amendment’s simple language could be abused to include women in the military draft or discriminate against same-sex private schools.)

At the time Schlafly published her report, the E.R.A. was having its moment in U.S. politics. The proposed amendment to protect all Americans from discrimination based on sex garnered national attention and bipartisan support, thanks in large part to momentum from the women’s movement throughout the 1960s. The E.R.A. sailed through Congress after its reintroduction in 1971, adopted by the House on Oct. 12, 1971, and the Senate on March 22, 1972. Within the first year of its seven-year deadline to achieve majority state ratification, 30 out of the necessary 38 states had ratified the E.R.A. After nearly 50 years of feminists championing the proposed amendment, it seemed highly likely that it would finally pass.

However, the same identity politics that empowered women to band together in the 1960s and promote legislation for the good of sisterhood also proved to have one glaring blind spot: excluded women. As second-wave feminism shifted its focus from libertating housewives to addressing the needs of women of color and poorer communities, the movement unintentionally created an exclusionary atmosphere in which traditionally married, working class women no longer felt represented and, in some cases, felt personally attacked by feminists. (Steinem famously called marriage a form of prostitution.) Arguably, it was seizing upon this disillusioned class that enabled Schlafly to develop her counter-movement against feminism.

The same identity politics that empowered women to band together in the 1960s and promote legislation for the good of sisterhood also proved to have one glaring blind spot: excluded women.

To be clear, Schlafly was a complicated, contradictory political figure. She claimed to represent housewives, but she herself was a working woman, writing furiously on U.S. law, national defense and other women’s issues in addition to organizing a conversative movement to protest the E.R.A. She was an anti-feminist, but she also embodied the liberated woman ideal that feminists fought for, albeit a less inclusive, less sisterly version. She advocated for pro-family values and protecting the unborn, but she also advocated for harmful policies against immigrants, the L.G.B.T. community and domestic violence survivors.

It might have been expected then that “Mrs. America,” as an ultimately pro-feminist series, would paint Schlafly as a conniving, hypocritical villainess. But while Schlafly is undoubtedly the show’s primary antagonist, she is actually a highly sympathetic character.

Throughout “Mrs. America,” we witness her ceaseless struggle to earn respect from the men in her inner circle, and time and time again, we observe these men take advantage of and belittle her. In one scene, she resigns herself to her husband’s persistent advances despite her clear exhaustion (likely a reference to Schlafly’s now-infamous dismissal of marital rape in 2007). In another, she is told that while she has a sharp mind, she is too old to attend law school. And despite Schlafly’s real passion for national security and defense policy, she is essentially pressured to pick up the reins against the women’s movement in order to achieve any real political power.

By leading the opposition to the E.R.A., Phyllis Schlafly effectively provided a smokescreen for men in Washington to resist feminists’ demands under the guise of protecting women’s “special privileges.”

By leading the opposition to the E.R.A., Phyllis Schlafly effectively provided a smokescreen for men in Washington to resist feminists’ demands under the guise of protecting women’s “special privileges.” It was a move that earned her an influential conservative voice in American politics, but ultimately one that came at the expense of other women’s fight for equal rights. As the Republican feminist Jill Ruckelshaus (Elizabeth Banks) poignantly tells Schlafly near the end of the show: “You want to get ahead by climbing on the shoulders of men, Phyllis? Fine. Just know: They’re looking right up your skirt.”