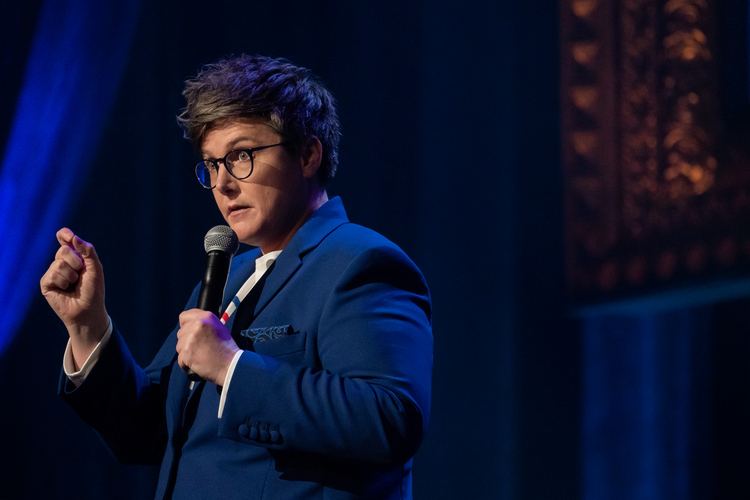 One of the basics of comedy is the element of surprise, and Hannah Gadsby’s “Nanette” surprised us by not being comedy. What was it, then? Performance art? Standup memoir? A “lecture,” as some of Gadsby’s detractors (she tells us) deemed it? It was unquestionably funny. It was also heartbreaking. And its amorphous qualities helped make Netflix’s filmed version a hot topic of conversation in 2018.

As a “Nanette” fan might have anticipated, Gadsby drives “Douglas,” named after her dog (there’s a reason), directly into the teeth of “Nanette.” It’s “my second album,” she tells her live Los Angeles audience, offering a tactical concession of defeat before the battle is even underway. If you are here because you liked “Nanette,” she asks, why are you here? It can’t possibly be repeated. Of course, if you didn’t like “Nanette,” why in the world are you here? And if you never saw “Nanette” well, “good on ya,” the Australian performer says, all the while demolishing the conventions of comedy, which she said she was quitting in “Nanette” anyway.

One of the basics of comedy is the element of surprise, and Hannah Gadsby’s “Nanette” surprised us by not being comedy.

It takes approximately 14-and-a-half minutes of setup—or tear down—before Gadsby says, “The show starts…now!” Prior to that she has told the audience everything she is going to tell them in advance, thus employing the element of distraction, like a magician who shows you your card, puts it in the deck and takes it out of your handbag at the end of the program.

What does she tell them she is going to tell them and then tells them? The “real” material—although there is nothing “unreal” about the way she’s been massaging the reception—involves several interwoven themes, one of them her late-in-life diagnosis of autism, something that she makes pointed as well as funny. Another is hate-baiting (“Don’t take the bait!” she warns the audience) about men and patriarchy, the implicit pretensions and privilege of golf, the Paleo diet and the historical inaccuracies of—yes—“Teenage Mutant Ninja Turtles,” who, as we all know, are named Leonardo, Michelangelo, Raphael and Donatello. Donatello doesn’t belong in there at all, she explains with mounting faux agitation. He should be named Titian! They are supposed to be named after Renaissance artists! Donatello isn’t even Renaissance! It’s an arguable point, as the real point here is irrationality and unreason, and how it can be expressed by all of us—women, autistics and men—especially when it involves something like whether the Teenage Mutant Ninja Turtles are actually “tortoises!”

“Douglas” may not be a masterpiece, but its mosaical construction is extraordinary.

Comics, or whatever Gadsby is, generally inhabit a character on stage, whether it is an exaggerated part of themselves or a new creation. Rodney Dangerfield, obviously, was the disrespected husband; more subtly, Jerry Seinfeld is the popular guy from high school who had gotten his heart broken; Samantha Bee is the nerd who was smarter than everybody else and is getting her revenge. Gadsby? It is not quite clear. Her personality—not just her life experience—is part of the act to a degree that surpasses those others. She relies on an abundant amount of vulgarity (she thinks it is a good punchline and it often isn’t), but that is as much a tic as the self-satisfied smile she offers after a particularly good gag. Is she being arrogant? It is probably exactly the opposite.

The humiliation (and humility) of Hannah Gadsby
Allyson Escobar

Not many comics/social critics/monologists integrate Renaissance art, or the saints, into their act, but Gadsby does and rather brazenly: As a way of getting into the patriarchy of all things, Gadsby uses a variety of slides of religiously inspired art which, when viewed in isolation and without annotation, can look a bit ridiculous. Central to this sequence is an etching by the obscure Dutch engraver known as I.A.M. of Zwolle that depicts St. Bernard and the Lactating Virgin, which readers can look up on their own. Gadsby makes great sport of it and other bits of allegorical churchly art, but she also makes fun of Americans for saying “gas” instead of “petrol” when gas(oline) by definition is not a gas! But we digress, and so does she, and not always to precise effect.

But such is the magic of “Douglas”: Sometimes Gadsby is playing a former standup comic explaining the mechanics of comedy; sometimes she is an autistic performing a story about her dog; sometimes she is explaining autism while exhibiting all the symptoms of the condition. “Douglas” may not be a masterpiece, but its mosaical construction is extraordinary.

Correction, June 1: Due to an editing error, this review initially misstated who said, “Don’t take the bait!’” It was Hannah Gadsby, not an audience member.

This article also appeared in print, under the headline “Hannah Gadsby is not quitting comedy, after all ,” in the June 22, 2020, issue.