‘Never Have I Ever’ depicts an authentic Asian-American experience on TV. Finally. 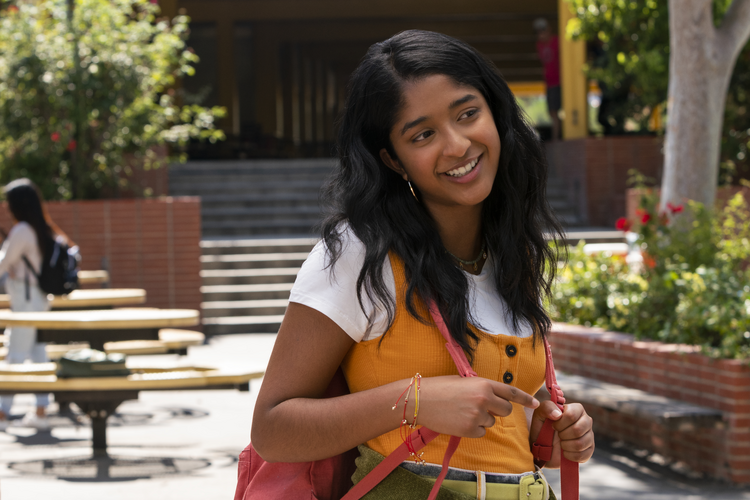 Maitreyi Ramakrishnan as Devi in ‘Never Have I Ever’ (Netflix)

When I was young, I longed to see a version of my Asian immigrant family’s experience on mainstream television. Growing up, other than the international movies we brought home from the local Filipino grocery store, my options were Disney’s “Mulan,” films and TV shows with Asian brainiacs, or stereotypical martial arts action movies.

Fast forward to 2018: “Crazy Rich Asians”and “To All The Boys I’ve Loved Before”became surprise hits, both with Asian Americans playing the leads. I watched these movies in earnest, wishing I had the idyllic, sometimes wild, luxurious lives these families had. I enjoyed the films, but I couldn’t quite relate to their stories.

‘Never Have I Ever’ is a refreshing take on growing up in an immigrant family, where cultural and religious traditions are part of everyday life.

This year, however, my hopes were finally fulfilled, thanks to Netflix’s new comedy-drama “Never Have I Ever,” from Mindy Kaling and Lang Fisher. The first season dropped at the end of April, just in time for binge-watching during May, which is Asian Pacific American Heritage Month. The film took me on an emotional journey—one I didn’t see coming from a “rom-com” aimed at young people.

Inspired in part by Kaling’s own upbringing, “Never Have I Ever” is the story of a South Asian girl, Devi Vishwakumar, who is Indian American. It is a not-so-typical, coming-of-age story of a first-generation American teenager dealing with grief in addition to cultural and family pressures—all while trying to survive high school in the Los Angeles area. It is a refreshing take on growing up in an immigrant family, where cultural and religious traditions and the pull of “the homeland” are part of everyday life.

The Asian Pacific American representation among the shows’ actors is impressive, including newcomer Maitreyi Ramakrishnan as Devi and Poorna Jagannathan as Devi’s mother, Nalini. Through Devi’s experiences, the show also highlights major issues that are often shied away from in the Asian Pacific American community: mental health, understanding grief and navigating cultural, generational and religious barriers.

Through Devi’s experiences, the show also highlights major issues that are often shied away from in the Asian Pacific American community.

After the sudden loss of her father, Mohan (Sendhil Ramamurthy), to a horrible accident, Devi and her mother are struggling to grieve properly, complicating their already strained relationship. Devi is focused on boys and parties, while still working to stay on top of her studies and on her mom’s good side. Nalini holds high expectations for Devi’s success in life, having sacrificed everything to move to Los Angeles from India with Mohan.

Both mother and daughter have the tendency to deflect or hold in their emotions. Nalini is trying to be the strong, responsible, “perfect” single parent. Devi hopes that becoming popular and winning the heart of the dreamiest guy at her school might fill the gaping hole in her chest.

Devi’s cousin, Kamala, appears to have less trouble adjusting to American life and fulfilling the expectations of her Indian family. She moves in with Devi and Nalini while finishing her doctorate at Caltech. I found her character arc to be the most surprising. At first, Kamala seems to be the dutiful daughter, agreeing to explore an arranged marriage and a future already determined for her. But she also refuses to settle in love or in her career. She manages to find a hopeful path that allows for happiness in both, and defies the stereotype of women having to choose between love and a career.

Devi’s friend reminds her that there is comfort and beauty in the rituals, especially in ones not so easily understood.

One of the best aspects of the show is the way in which it embraces both the beauty and challenges of being true to one’s sense of self and the culture in which one is raised. In one episode, Devi’s family goes to a local Hindu celebration of Ganesh Puja, a birthday party for the Indian god Ganesh. The colorful portrayal—filled with burning incense, Sanskrit chanting and gossiping aunties in shimmering saris—is an example of series’ creator Mindy Kaling’s efforts to more robustly represent Indian rituals on the screen. (A Hindu priest was also a consultant on the episode.)

The event is a pivotal one for Devi, who struggles to embrace some aspects of her Indian identity—wearing her sari out, Bollywood dancing, celebrating Hindu traditions publicly. (She jokingly tells a childhood friend that she is “never coming back. I’m gonna be an atheist who eats cheeseburgers every day with my white boyfriend.”) But Devi’s friend reminds her that there is comfort and beauty in the rituals, especially in ones not so easily understood.

Watching this representation and identity struggle made me think of the commonalities among the experiences of many Asian and immigrant families: the comforting, cultural/religious traditions we celebrate year after year; that nosy aunt or uncle we all seem to have; the dishwasher that is never, ever used for washing dishes.

Like many shows centered around teens, “Never Have I Ever” is about finding love and navigating the shark-filled waters of high school, but with fewer mainstream TV tropes.

Devi and her two best friends, Fabiola and Eleanor, are considered the “nerds” of the sophomore class at their diverse high school in L.A.’s San Fernando Valley. Yet, from the start they still come across as independent, strong-willed women of color, each navigating their world in a unique way.

Like many shows centered around teens, “Never Have I Ever” is about finding love and navigating the shark-filled waters of high school.

In the end, by being herself, (spoiler alert) Devi has managed to attract two love interests, Ben and Paxton, between whom she is torn. Both characters defy the wholesome boyfriend or typical bad boy/jock stereotype.

But perhaps the most groundbreaking and refreshing aspect of the show is its treatment of mental health. In many Asian and immigrant families, talking about feelings is hard but necessary work. “Never Have I Ever” depicts this struggle with grace. An Asian American girl going to therapy, supported by her friends and family, is a unique storyline on mainstream television, and one with the potential for a big impact. (It is especially welcome during May, which is also Mental Health Awareness Month). The viewer gets to watch Devi grow in her understanding of the role her regular visits to therapy play in her process of self-acceptance and healing.

Her mother’s understanding grows as well. One of the show’s most moving moments is when Nalani pays a visit to Devi’s therapist, Dr. Jamie Ryan (Niecy Nash), and expresses her worries about her daughter and their strained relationship. Nalani starts by stubbornly saying therapy is “for white people,” a sentiment often echoed in immigrant households. But after some encouragement, Nalani ends the session with the powerful realization of her own deep fears.

“You don’t always have to be so strong,” Dr. Ryan gently reminds her. “It might help [Devi] to know that you’re also struggling. Have you considered that falling apart might actually be the thing that brings your family back together?”

Grief is a monster set on making us feel alone. Watching Asian families deal with loss and their feelings in a healthy, natural way is exhilarating. Seeing them fall apart, let go and come to terms with the heartbreak is empowering.

“Never Have I Ever” made me feel not only seen, but heard. The show is a unique look at the Asian American experience. But it is also a realistic and feel-good comedy. It is a show about understanding grief and saying goodbye. It is a show about family, love and togetherness. In other words, it is about life.

Allyson Escobar, a graduate of Loyola Marymount University and the CUNY School of Journalism, is a former America  intern.

@heyallysonrae
Show Comments ()
Join the conversation: Login or create an account
Before you can comment, you need to update your profile to include your first and last name, as required in our comments policy. Then reload this page and you'll be set up for commenting. Update your profile