‘The Last Dance’ asks: What is the price of greatness? 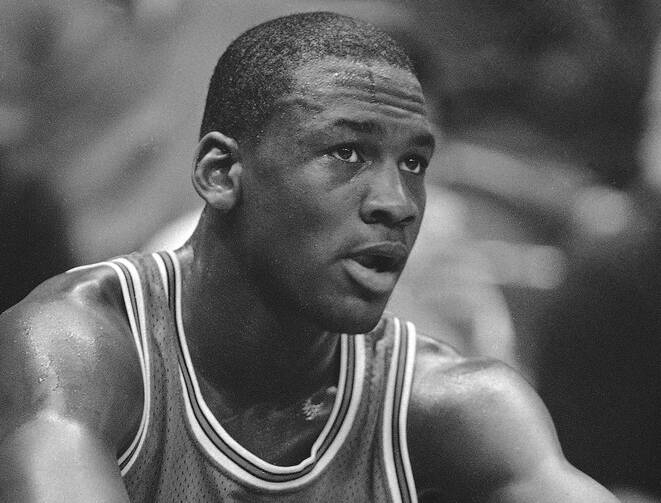 A young Michael Jordan in "The Last Dance" (Photo: IMDb).

The first thing I noticed when tuning into “The Last Dance” were Michael Jordan’s eyes. The second was the glass of tequila resting on a side table. The two might be related.

Transporting viewers back in time—to an era of a clear-eyed, passionate young Jordan whose focus and intensity in the game of basketball was intimidating even through a TV screen—“The Last Dance” tells the story of the 1997-98 Chicago Bulls and their quest to win a remarkable sixth N.B.A. championship in an eight-year span. The 10-part documentary series (two episodes are being released each Sunday for the next four weeks) is produced by the Oscar-winning ESPN Films, also responsible for “O.J.: Made in America,” and the well-known “30 for 30” series, likely the best collection of sports documentaries ever made. “The Last Dance” is a worthy addition to their incredible resume.

In 1997, Bulls management and top players (read: Michael Jordan) agreed to give a film crew from N.B.A. Entertainment basically unrestricted access to their upcoming season. That footage made “The Last Dance” a possibility; the only thing keeping it from becoming a reality for the past 23 years was Jordan’s approval (or more precisely, his lack of it). As a part of the agreement, he had to give his permission for the footage to be released. In 2016, a producer finally convinced Jordan it was time.

“The Last Dance” tells the story of the 1997-98 Chicago Bulls and their quest to win a remarkable sixth N.B.A. championship in an eight-year span.

The result is a detailed journey through a season where the Bulls would, in fact, win the championship, despite the drama of early-season struggles and bitter organizational politics. Along the way, the series provides background on Jordan and other key figures on the team.

I almost felt privileged to be watching “The Last Dance,” like I did not deserve so much unfiltered access to such a storied team. Episode 1, for example, explains how then-general manager Jerry Krause drew the ire of Jordan and others when he talked about splitting the team up and parting ways with five-time championship-winning coach Phil Jackson. As a multitude of modern-day interviewees weigh in on the Krause situation (over 100 people were interviewed for the series), we are shown a clip of Jordan making fun of Krause for his height, and then for his weight. It is the kind of moment you cannot believe was ever caught on film in the 1990s, and these moments make for a compelling storyline that humanizes each of the characters.

But the real brilliance of the series is seated in a white chair, wearing a blue T-shirt and jeans, sporting that glass of tequila as he answers questions from an interviewer. Michael Jordan’s greatness is so immense that even now, long past his playing days, it still commands our attention.

I almost felt privileged to be watching “The Last Dance,”, like I did not deserve so much unfiltered access to such a storied team.

Some context here: I was only a year old when the Bulls won their sixth title in 1998, and I was 6 when Jordan retired from basketball (for the third and final time) in 2003, so “The Last Dance” is not a trip down memory lane for me. I never saw Jordan play. People’s fascination with Jordan never resonated with me. So it is without a trace of nostalgia that I say this series is utterly captivating simply because it tells Michael Jordan’s story. It is a story of greatness.

We love greatness, to the point of total dominance, in sports. It does not make a whole lot of sense; one would expect that we would get tired of the same person or team winning over and over, but we do not. Fans are ecstatic when Tiger Woods wins a golf tournament or Serena Williams wins a Grand Slam event or when Michael Jordan wins his sixth championship in eight years. From a Christian perspective, it makes even less sense. Why would we want to see a team or player dominated by another?

Perhaps that is the wrong question. Maybe we are attracted by glimpses of the transcendent in an athlete’s performance. Larry Bird, describing Jordan’s 63-point performance in the 1985 playoffs, joked that it was not Michael Jordan out there playing basketball. “That was God disguised as Michael Jordan,” he says in Episode 2. There might be some truth to that. Is there not some element of the divine present when human beings move beyond what seems to be physically and mentally possible?

We crave any insight into this athletic greatness because there is something both superhuman and supremely human about it. This is what “The Last Dance” provides.

We crave any insight into this athletic greatness because there is something both superhuman and supremely human about it.

Roy Williams, now the head men’s basketball coach at the University of North Carolina, was an assistant coach at U.N.C. when Jordan played there in the early 80s. His interview in the first episode reveals Jordan at a point of transition from “Mike,” a kid from Wilmington, N.C., to “Michael Jordan,” the greatest basketball player ever to live. When Williams challenges the freshman Jordan about his work ethic, Jordan tells him: “I’m gonna show you. Nobody will ever work as hard as I will.”

“Michael Jordan is the only player who could ever turn it on and off,” Williams said in the interview. “And he never freaking turned it off.”

But that unbridled greatness on the basketball court has a cost. And that brings me to Jordan’s eyes.

Should colleges pay their athletes? What Catholic social teaching has to say.
Kevin Jackson

Clips of Jordan’s college and early N.B.A. career show his remarkably clear eyes, full of energy and quietly radiating confidence. He is hungry. He wants to play basketball at the highest level that he and his team can possibly reach. He has the eyes of a kid who would score 49 points against Larry Bird’s Boston Celtics in the playoffs and then decide that was not enough; he scored 63 the next night.

In the modern-day interviews ESPN conducted with Jordan, his eyes are different: cloudy, aging, difficult to read. You can practically see memories of his past swirling around. Maybe it’s just the high definition cameras, or maybe he’s on his third tequila, but a 2013 profile of Jordan put it this way: “Aging means losing things, and not just eyesight and flexibility. It means watching the accomplishments of your youth be diminished.”

We know how the 1997-98 season ends, but that internal struggle that accompanies the pursuit of greatness is far from over. Perhaps this is the real “last dance” for Jordan—recognizing that even the loftiest achievements of the past do not bring fulfillment in the present. Maybe he can train those once-hungry eyes to the pursuit of a new greatness.