The 1995 film ‘Safe’ has new meaning during our coronavirus isolation 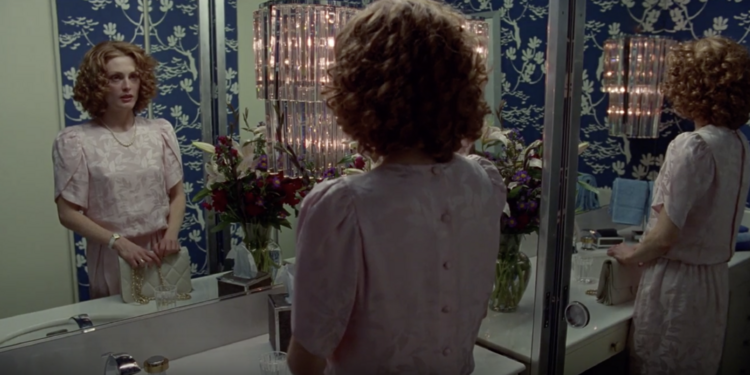 Julianne Moore as Carol White in in the 1995 film "Safe." The film, according to Empire Magazine, helped to establish Ms. Moore as "perhaps the finest actress of her generation." (screenshot from YouTube)

In the San Fernando Valley, Carol White, a homemaker and poster child of late 1980s affluence, spots a flier on the bulletin board in her local fitness center. The orange ad looks like a warning, and it invites people like Carol—stricken by a nebulous, increasingly debilitating illness—to discover exactly what is making them so sick.

“Are you allergic to the 20th century?” the announcement asks.

Released in 1995, “Safe,” the second feature from director Todd Haynes (also known for his HBO adaptation of “Mildred Pierce”), is a difficult film to define. It is an examination of 1980s America, gripped by fear and uncertainty surrounding H.I.V./AIDS; an interrogation of new age medicine and treatment centers that function more as cults than as health facilities; and a startling portrait of a woman in free fall.

Carol is afflicted with a controversial diagnosis: multiple chemical sensitivity.

Featuring a soft-voiced, tour-de-force performance from Julianne Moore, whose slightest gestures reveal a world of tumult within Carol White, “Safe” takes on new meaning when read through the context of 2020—a year marked by fear and mass quarantine in response to the lethal new coronavirus. A quarter century later, the film maintains a haunting relevance.

The stress, uncertainty and yearning for answers felt by Carol echoes our current national mood, as people of all ages across the United States grapple with increased isolation and the reality of a rapidly spreading, yet not fully understood, illness. Forty-two states have issued widespread shelter-in-place orders, urging people to stay in their homes and to keep at least six feet away from others.

In the film, Carol has no shortage of physical symptoms. Driving on the highway, she chokes on exhaust fumes from the truck ahead of her. She wheezes and gasps for air at a baby shower. She suffers a violent seizure breathing in chemicals at the dry cleaner. She breaks out in a mysterious rash.

After a short hospitalization, she decides to seek treatment at Wrenwood—an isolated, chemical-free facility in a desert outside Albuquerque, N.M. When Carol arrives by taxi, she is greeted by a terrified woman in an oxygen mask, screaming at the driver, “Go back! You’re contaminating this entire area!”

Peter Dunning (Peter Friedman), the director of Wrenwood, is a near-messsianic, vaguely threatening apostle of healing. Angered and upset by depressing news coverage (can you relate?), Peter tells his followers at Wrenwood that they should no longer watch the news.

At the film’s conclusion, she isolates herself by opting to live in a sterile, porcelain-lined safehouse resembling an igloo.

“If I really believe that life is that devastating, that destructive, I’m afraid that my immune system will believe it, too. And I can’t afford to take that risk. Neither can you,” says Peter.

Carol, in today’s parlance, is socially distanced, first from her concerned friends and eventually from her own family. At the film’s conclusion, she isolates herself from others at Wrenwood by opting to live in a sterile, porcelain-lined safehouse resembling an igloo.

Throughout the film, the cinematographer Alex Nepomniaschy shows Carol physically separated from others or dwarfed in large, open rooms in her stately home. “For much of the movie, Carol is at a distance...an impassive Stepford cipher in danger of being swallowed up by her environment,” notes Dennis Lim, director of film programming at Lincoln Center in New York, in a 2015 essay.

Haynes, once involved with the AIDS-focused activist group Act Up, includes AIDS in a potpourri of confusing new illnesses treated at Wrenwood. Parallels between the AIDS crisis and the coronavirus pandemic have been noted by Michael J. O’Loughlin, our national correspondent.

“One question I always asked the people I interviewed [for the “Plague” podcast] was if they could describe the sense of fear felt in the early days of the H.I.V. and AIDS crisis. Many people had trouble describing the sense of foreboding and dread that they said permeated everyday life, but they all agreed it was there,” writes O’Loughlin in a recent article for America.

President Trump, who has adopted wartime rhetoric to describe the U.S. battle against coronavirus, now refers to the virus as “the invisible enemy.” In the following exchange from “Safe,” two women discuss their sickness in a similar manner:

“You don’t know when that monster is gonna jump out at you. You’re just, like, going along the wall, like any normal person.”

“Oh right, with your mask and your oxygen tank and your bottled water.”

Today, “Safe” remains disturbingly vital, as our sense of security and peace of mind feel out of reach. Most likely, Carol is still sitting in her igloo, waiting out the storm, staring at the mirror and repeating in her head Wrenwood’s ironic chant: “We are one with the power that created us. We are safe, and all is well in our world.”