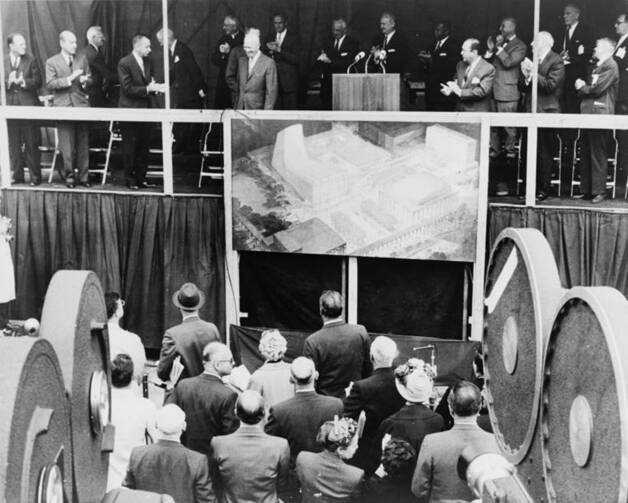 Guests applaud President Dwight D. Eisenhower (to the left of the podium) at the ground-breaking ceremony for the Lincoln Square project in 1959. Directly behind him is Laurence J. McGinley, S.J., the president of Fordham University at the time. Fordham received a significant piece of property at Lincoln Square to build a downtown campus. (Library of Congress)

The seminal, finger-snapping musical “West Side Story,” which made its Broadway premiere at the Winter Garden Theatre in New York in 1957, has recently been revived by the Tony Award-winning director Ivo van Hove at the Broadway Theatre. (See a review of that production from America regular Rob Weinert-Kendt.) The show, a touchstone of the American theater adapted nearly 50 years ago into a 10-time Academy Award-winning film, was greeted with effusive praise and high-flying superlatives when first unleashed on theatergoers.

Writing in 1957 for the New York Herald Tribune, Walter Kerr—the namesake of a Broadway theater—describes a dust-up between rival street gangs, the Sharks and the Jets.

“There is a sneer, a hiss, a tempting and tantalizing thrust of an arm, and then—with a powerhouse downbeat from the orchestra pit—the sorry and meaningless frenzy is on,” writes Kerr. “From this moment the show rides with a catastrophic roar over the spider-web fire-escapes, the shadowed trestles, and the plain dirt battlegrounds of a big city feud.”

What ever happened to those shadowed trestles, that neighborhood where Tony crooned his love for Maria? What ever happened—if you’ll permit me a John Stewart reference—to those faces in the old photographs? The answer, in a nutshell, is urban renewal.

What ever happened to those shadowed trestles, that neighborhood where Tony crooned his love for Maria?

The setting of “West Side Story” is San Juan Hill, the nickname of the Lincoln Square area of the Upper West Side of Manhattan—an area bulldozed and redeveloped into the Lincoln Center performing arts complex in the early 1960s. The U.S. Housing Act of 1949, passed during the Truman administration, set the stage for the destruction of the San Juan Hill neighborhood, afflicted by poverty and urban decay. The act provided for the revitalization of slums as part of a wider vision promoting public housing.

According to a study by Alexander von Hoffman of Harvard University on the 1949 Housing Act, it “set lofty goals—to eliminate slums and blighted areas and provide a decent home for every American family—but provided the limited mechanisms of public housing and urban renewal to meet them.”

Slum clearance also adversely affected low-income residents. Signed by Franklin D. Roosevelt, the Housing Act of 1937 sought to “provide financial assistance to the States and political subdivisions thereof for the elimination of unsafe and insanitary [sic] housing conditions...and for other purposes.” This New Deal-era program, also known as the Wagner-Steagall Act, fostered an approach to public housing, “albeit a narrow one that targeted the slums and the slum-dwelling poor,” von Hoffman notes.

In New York City, the controversial urban planner Robert Moses, subject of Robert A. Caro’s massive 1,300-page tome “The Power Broker,” came to prominence with near mythological influence as chairman of the Mayor’s Committee on Slum Clearance. Citing Title I of the 1949 Housing Act, which provided capital grants to public agencies for the redevelopment (i.e., razing) of slums, Moses finished 17 urban renewal projects between 1949 and 1960.

Before a crowd of some 12,000 people in May 1959, President Dwight D. Eisenhower broke ground in New York for the $75 million Lincoln Center project. (Adjusted for inflation, that’s a nearly $665 million price tag.)

Before a crowd of some 12,000 people in May 1959, President Dwight D. Eisenhower broke ground in New York for the $75 million Lincoln Center project. (Adjusted for inflation, that’s a nearly $665 million price tag.)

“Lincoln Center for the Performing Arts symbolizes an increasing interest in America in cultural matters as well as a stimulating approach to one of the nation’s pressing problems—urban blight,” said Eisenhower at the ground-breaking ceremony, also attended by then-Mayor Robert F. Wagner, John D. Rockefeller III and Leonard Bernstein—who wrote the music for “West Side Story.”

A preliminary report on the Lincoln Square project, released by the Committee on Slum Clearance in July 1956, proposed multiple venues, including what is now the Metropolitan Opera House, the New York Philharmonic and a Fordham University campus. According to The New York Times, the inclusion of a campus for a Jesuit-run institution concerned some who viewed the relationship between the university and the city as violating church-state separation. Monsignor Thomas J. Shelley, in his book on the history of Fordham, writes that the university purchased around seven-and-a-half acres “between Columbus and Amsterdam avenues from 60th to 62nd Street” for $2,242,610.

The preliminary report also made room for the inclusion of “moderate income housing for 4,000–5,000 families,” while The Times referred to to an American Red Cross headquarters.

Detailing decay in the neighborhood, the report stated that 478 of 482 residential buildings were “ in need of major repairs” and that poor urban planning, which congested the neighborhood with one multi-story walk-up after another, had led to overcrowding. The report emphasized the need for affordable housing in the city, already a growing issue by 1956, and noted that middle-income families had been driven away from San Juan Hill because of its substandard living conditions.

While San Juan Hill was characterized by city officials as a dirty, run-down slum, the neighborhood’s cultural significance should not be neglected.

The redevelopment of Lincoln Square, however, led to the eviction of its majority black and Hispanic tenants, who then found themselves in Harlem or the Bronx and not in new housing units proposed by the Committee on Slum Clearance. The New York Times estimated that 7,000 lower-class families and 800 businesses were driven out of their former community.

“You cannot rebuild a city without moving people any more than you can make an omelet without breaking eggs,” said Moses during the 1959 ground-breaking ceremony. “We do, indeed, sympathize with tenants and do everything possible to help them. But we cannot give everybody and his lawyer what they want,” he said.

Review: Robert Caro tells us how he does it
Kevin Spinale

While San Juan Hill was characterized by city officials as a dirty, run-down slum, the neighborhood’s cultural significance should not be neglected. It was the birthplace of the Charleston and a haven for New Orleans jazz music, the place pioneering jazz pianist Thelonious Monk called home.

“Lincoln Square also had a rich history of theater and the visual arts that long predated Lincoln Center,” said John Strausbaugh, the host of The New York Times’ Weekend Explorer video series, in a 2008 video on the history of Lincoln Center. Mae West performed at the Colonial Theatre on Broadway and 62nd Street; playwright Eugene O’Neill and painter George Bellows were roommates at the Lincoln Square Arcade on Broadway and 65th Street.

Philharmonic Hall, now called David Geffen Hall, was the first building to open at Lincoln Center in 1962. While the center is now one of the crown jewels of the Upper West Side, the history of yesterday’s neighborhood is out of sight. Today, the New York Public Library for the Performing Arts, located to the right of the Metropolitan Opera, allows the public to watch recordings of past productions of “West Side Story,” perhaps the lasting legacy of San Juan Hill, where those shadowed trestles once stood.

Correction, Feb. 25: A previous version of the article stated that Fordham University paid $25 million dollars for their Lincoln Center property. The university paid $2,242,610 for that property, which adjusted for inflation, is around $20 million. Also, this article referenced Avery Fisher Hall, which is now called David Geffen Hall since 2015.

Ryan Di Corpo is an O'Hare fellow at America.