Review: A wild war between zoos 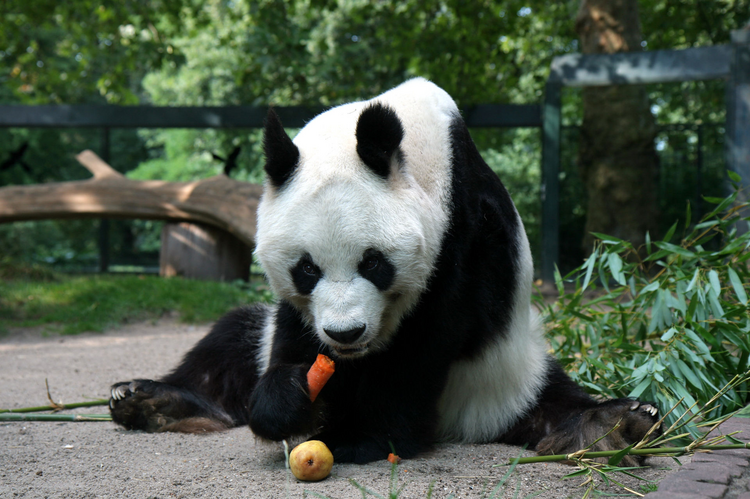 Bao Bao was a male panda gifted to West Germany's Berlin Zoo by China during the height of "panda diplomacy" in the '80s. He passed away in 2012. (Wikicommons)

Germany’s reconstruction after World War II was complicated, to say the least. Treaty negotiations at the Potsdam Conference in 1945 divided the country and its capital, Berlin, into four occupation zones overseen by the Allied forces (Britain, France, the U.S.S.R. and the United States). A precarious combination of war reparations, material shortages and the collapse of the Reichsmark—the country’s currency—forced Germany into a bleak economic situation. The occupiers split the country, already divided by attitudes toward the Nazi regime, into the Federal Republic of Germany in the west and the German Democratic Republic (G.D.R.) in the east. Berlin, too, was split, becoming a political hotbed when the G.D.R. erected a concrete wall that separated West Berlin from East Germany in 1961.

The Berlin Wall not only divided the city physically, but also sparked intense cultural competition on both sides. The most popular of these cultural tug-of-wars occurred between the venerable West Berlin Zoological Garden and East Berlin’s modern Tierpark. What started as a series of independent endeavors for zoo profitability and innovation soon evolved into an ideological battleground, where the struggle for animal park superiority would be proof of the vitality of capitalism in West Berlin or that of socialism in East Berlin, respectively.

This is the stage for J. W. Mohnhaupt’s first book, The Zookeepers’ War (translated by Shelley Frisch), an earnest plunge into the extraordinary history behind Berlin’s competing zoos and the enthralling rivalry of Heinz-Georg Klös and Heinrich Dathe, the two zoo directors, who were equally determined to build the world’s greatest animal park.

Klös and Dathe stockpiled rare, exotic animals, built imaginative displays, schmoozed with the press and canvassed politicians and aristocrats for more funding—all while keeping a close eye on each other’s progress. These efforts increased international attention on the West Berlin Zoo and the Tierpark, thereby boosting the zoo directors’ reputations among the globe’s leading zoologists.

Klös and Dathe stockpiled rare, exotic animals, built imaginative displays, schmoozed with the press and canvassed politicians and aristocrats for more funding—all while keeping a close eye on each other’s progress.

Fame proved to be a double-edged sword, as Berlin’s bureaucrats recognized the zoos’ marketability for their cities. Soon, Klös and Dathe learned that “victory in this war was no longer a matter of currying favor with visitors, but rather of pleasing the bigwigs in Bonn and East Berlin.”

With its comprehensive coverage of Berlin’s zoos, as well as Mohnhaut’s penchant for dramatic, sometimes humorous details, The Zookeepers’ War is a highly entertaining true story that is sure to delight history buffs and general audiences alike.

Correction (Feb. 12): An earlier version of this review failed to note that the book was translated from the German original by Shelley Frisch.

This article also appeared in print, under the headline “Zoo versus zoo,” in the February 17, 2020, issue.

@izzysenechal
Provide feedback on this article
Join the conversation: Login or create an account
Before you can comment, you need to update your profile to include your first and last name, as required in our comments policy. Then reload this page and you'll be set up for commenting. Update your profile