Is HBO’s ‘The New Pope’ blasphemous? 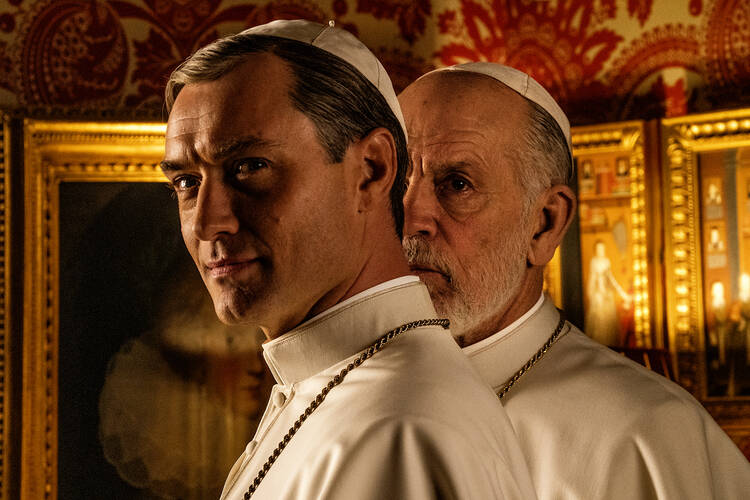 It’s something of an indelible image: Jude Law, very bronze, very fit and clad in nothing but a tightie-whitie Speedo, slo-mo strutting down a beach populated by beautiful, bikini-clad women. The sequence is intended as a provocation. And it certainly is. Especially since Law is playing the pope.

It should be noted that in “The New Pope” God is ever present.

One of them, anyway. “The New Pope,” nine episodes of which are currently playing on HBO, is a sequel to 2016’s “The Young Pope,” and has arrived at the dramatic and timely destination to which the first series was undoubtedly aiming all the time—namely, a crisis of multiple pontiffs. In the first series, Lenny Belardo (Law) becomes the first American pope, Pius XIII, an archconservative with an idolatrous following. He ends the series by collapsing in a heap. When “The New Pope” begins, Pius is on life support, has had three unsuccessful heart transplants and the church—or, rather, the Curia, and even more specifically, Cardinal Voiello (Silvio Orlando), the Vatican secretary of state and insider extraordinaire—decide they need to put someone else in the chair of Saint Peter. Someone who can breathe, eat and not necessarily think for himself.

Much of what happens in “The New Pope”—the product of the gifted Paolo Sorrentino (his co-writers were Stefano Bises and Umberto Contarello)—often has the quality of a dream. A satirical dream. The Jude on the Beach credit sequence (which actually comes later in the series); the gyrating nuns who populate a Vatican-adjacent convent and who boogie-down after dark; the scenes of debauchery or its aftermath that punctuate several moments of decidedly un-Christian behavior—all are hallucinatory. Other aspects are rooted in an unhappy reality.

Much of what happens in “The New Pope” often has the quality of a dream. A satirical dream.

But is it blasphemous? A TV review is not, perhaps, the forum to determine that, but it should be noted that in “The New Pope,” God is ever present. Miracles are possible; so is sainthood. Little Pius, the child born to Esther (Ludivine Sagnier) in the first series, is considered a Lenny miracle. What develops (no spoilers) can only be attributed to divine intervention. The imposition of goodness on the otherwise inclined is a gesture of reverence and a sign of providence in a universe that may, yes, sometimes seem polluted.

As portrayed by Sorrentino and Co., corruption within the Vatican is outrageous, if not completely implausible. When a conclave is called, cardinals jockey for position, including Voiello, who, when his chances dim, is told better luck next time. “Next time I’ll be 114 years old!” he exclaims. If Voiello can’t be pope himself, he will certainly decide who is, though his machinations and those of his lieutenants and allies— including the cardinals Gutierrez and Assente (Javier Cámara and Maurizio Lombardi) and even the Voiello lookalike Hernández (Mr. Orlando again)—backfire. Elected is Cardinal Viglietti (Marcello Romolo), who seems like a malleable figure until his first appearance on the balcony of St. Peter’s, where a dove makes off with his Curia-prepared speech and he has to ad lib. “Oh no,” someone says, “he’s realizing who he is.” This new pope—Francis II—launches a campaign to divest the Vatican and its cardinals of their worldly belongings and invites Middle Eastern refugees to occupy the basilica.

The Young Pope: The Catholic art that Catholics need (but might not want).
Nick Ripatrazone

Sorrentino knows his recent and not so recent papal history: Francis II’s tenure is as brief as that of John Paul I, and when the real “new pope” Sir John Brannox is elected—that he is a devotee of John Henry Newman is not an insignificant detail—he names himself John Paul III.

John Paul III is played by John Malkovich, and it is an example of perfect casting. The actor’s innate aloofness and somewhat effete persona make the new(er) pope a character unsuited to almost any world outside the entitled English bubble whence he’s come. But he is also just politic enough to survive. He is also a seriously flawed individual, whose failings happen to be fascinating. It would be unfair to divulge much of what happens in the “The New Pope” once JPIII takes the throne because so much of the show is intended to shock, even as its twists and turns make one more and more immune to shock itself. It is probably safe to say that the series evolves into a story of war between God and ego.

Would it be a spoiler to say who wins?