The Young Pope: The Catholic art that Catholics need (but might not want). 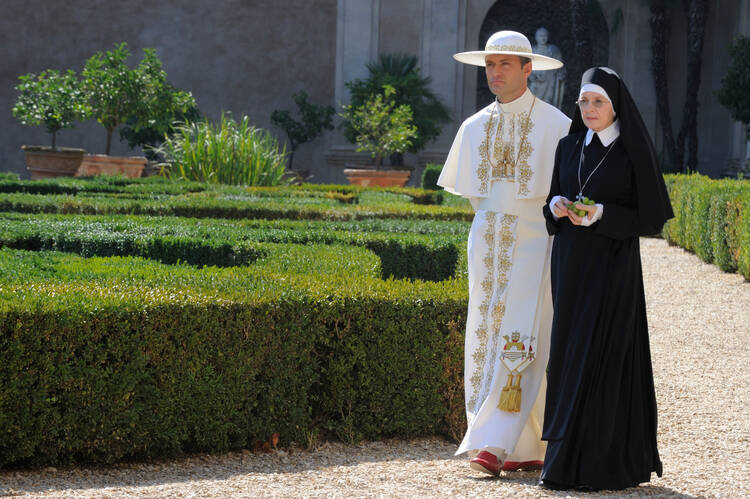 Jude Law and Diane Keaton in The Young Pope. Photo by Gianni Forito for HBO.

Written and directed by Paolo Sorrentino, and starring Jude Law and Diane Keaton, “The Young Pope” is visually arresting, and occasionally surreal. Dream sequences are stretched to their limit. In the first episode, Pius gives a lengthy, heretical opening address to a swelled, shocked crowd at St. Peter’s before Sorrentino cuts back to reality. The dream serves its purpose: Pius will push the envelope. He knows the power of surprise.

Although provocative, “The Young Pope” is not perverse; like Ron Hansen’s novel Mariette in Ecstasy, the show plays with sensuality and sexuality but is never gratuitous. As Pius, Jude Law is handsome, confident, cold and given to aphoristic pronouncements. He is gifted with many great lines. When the longtime papal cook, a nun, greets Pius as she would a son, he rebukes her. “Friendly relationships are ambiguous,” he says, but “formal relationships are as clear as spring water.” Pius was able to manipulate hearts and minds during the papal conclave because the cardinals thought he would be malleable. Once in office, he is staid. A proud traditionalist, he proclaims, “God overwhelms; God frightens”; “I don’t want any more part-time believers, I want fanatics for God”; and “Liturgy is no longer a social engagement.”

Pithy lines like these speak to a peculiar success of the show. “The Young Pope”will draw in both secular and Catholic audiences for curiously similar reasons. By drawing attention to the performative aspects of his position—the theatrics of the papacy—Pius forces those around him to take nothing for granted. He is not what people think he will be. There can be no relaxation in his presence.

Pius is not a stand-in for Pope Francis, but the analogy is instructive. Many secular champions of Francis’s environmental encyclical “Laudato Si’”are disappointed by his allegiance to doctrine and tradition. (He has defended the encyclical “Humanae Vitae,” for instance, with its prohibition of birth control, and he affirmed the teaching that reserves the priesthood to men.) Yet Francis pushes back against simplistic labelling. As does Pius. Although young, Pius is drawn to tradition, pomp and circumstance. He embraces the spectacle of his position, but as a spectacle performed on his own terms.

Part of this appreciation for spectacle might come from his fractured origins. Law plays Pius as complicated and alluring, and slowly develops his vulnerability. “I’m an orphan,” he says, “and orphans are never young.” He grew up in an orphanage from age 7 onward, raised by Sister Mary, who joins him in the Vatican. Played by Diane Keaton, Mary is so close with him, so influential, that people think she is the real pope.

But vulnerable is not the same as sentimental. Pius can be flippant. When presented with an elaborate breakfast spread, he dismisses the arrangement, quipping, “All I have in the morning is a Cherry Coke Zero.” He is also Machiavellian, punishing all slights, and even makes decisions based on the perceived sexual orientations of those in the Vatican.

Although his portrayal is fascinating on many levels, Law never quite convinces that Pius is, well, pious. This is not a deficiency of Law’s performance but rather a testament to it.

Maybe Pius is not a conventional man of God. He is ambitious, conceited and probably heretical. (Pius tells Don Tommaso, the papal confessor, “I don’t have any sins to confess”; while describing the conclave vote, Pius admits that his prayer was “Lord, I don’t care with what means, licit or illicit, they’re all fine—just let it be me, not them.”)

It's time to admit it: Benedict Cumberbatch isn't a good Sherlock Holmes
Raymond A. Schroth, S.J.

Might one be manipulative in earthly matters—in the institutional machinations of the church—yet also be pious? Does that mean he is really not pious? I am not sure, and the series leaves that question open. In one subplot, an old-guard cardinal, Voiello, tries to create a scandal to ensnare Pius. Esther, a beautiful, devoted woman married to one of the Swiss Guards, previously had a secret affair with one of the priests who is now an assistant to Pius. Voiello uses Esther’s past to blackmail her into seducing the pope.

Without giving too much away, how Pius responds to the seduction speaks to the complexity of his character, as well as to the depth and nuance the show comfortably lives in.

Cinema’s fascination with Catholicism has mostly been focused on its superstitious and supernatural elements, such as the visceral ritual of exorcism, and on the marked juxtaposition of cassocked priests walking among the poor. The concerns of “The Young Pope” are more material and corporeal than mystical. Like Ron Hansen's novel, in which a young nun is drawn into a nearly erotic, though nonetheless chaste relationship with Christ, it makes us reconsider the relationships that we often maintain between sex, sensuality and belief. Law’s character is attractive, and the director knows it. Shots are framed and defined by the pope’s appearance, so much so that we flirt with idolizing his character. Yet in another way, the series shows how faith and desire intersect; both experiences involve people seeking something they cannot quite touch.

“The Young Pope” will likely appeal to different factions within religious audiences for different reasons, but its existence should be welcomed. At a time when clergy are represented on television as sexually repressed and authoritarian, as in the campy “Asylum” season of “American Horror Story,” “The Young Pope”strikes a more nuanced tone. When the poet Dana Gioia lamented the lack of good new Catholic literature, he noted that most representations of the faith are trite. "Catholic exposé," he wrote, "is now a mainstream literary genre, from the farcical to the tendentious." While Gioia acknowledges that good Catholic writing and art exist it is another thing to be good and visible, or good and noteworthy, within the broader artistic conversation.

Great contemporary Catholic art—the works of Hansen or Alice McDermott, the films of Martin Scorsese, and select others—tends to be disparate rather than continuous. There are pockets of brilliant Catholic storytelling these days, but not a substantive, influential presence as there was in decades past. “The Young Pope” might not be the Catholic art that many Catholics want, but it is the Catholic art they might need. Much like Robert Harris's recent novel Conclave, the show portrays the political posturing, deals and double-crossing that occur within the Vatican. Whatever its fictional exaggerations, the show is a fascinating window into the politics and spectacle of a world that informs the lives of so many Catholics worldwide. It should not, though, be taken as a pastoral work; it is not a window into, nor a spiritual guide for, the common person’s faith.

“The Young Pope” may strike viewers as a show that is objectively accurate about a Catholic milieu while not being Catholic in a devotional sense. In that way, the show is similar to the film adaptation of The Exorcist, a story written by a Catholic (William Peter Blatty) but directed by a Jewish agnostic (William Friedkin) who has said he “strongly believes in the teachings of Jesus.” “The Young Pope” is a good example of how Catholic art should gesture toward morality—and should be honest in its representation of that morality—but does not need to be a pastoral work. It does not have to be a guidepost for “growing in the faith.”

“The Young Pope” is a rarity: a show about Catholics on HBO, with name actors, stylistic and arresting direction and visuals, and an interesting plot that can catch and keep the attention of diverse audiences. The show does not parody Catholics or oversimplify them; rather, it speaks to the complexity of faith in lived practice, and how even its “official representatives” can be terribly imperfect.

Nick Ripatrazone has written for Rolling Stone, The Atlantic, The Paris Review, and Esquire. His newest book is Ember Days, a collection of stories. He lives in New Jersey.

@nickripatrazone
Show Comments (
2
)
Comments are automatically closed two weeks after an article's initial publication. See our comments policy for more.
Henry George
5 years 7 months ago
Any Pope who says: " Liturgy is not a social engagement " can't be all bad. [ Perhaps people will stop talking in Church before and after Mass while others are trying to pray - after they watch this Mini-Series. ]
Jay Kay
5 years 6 months ago
Some ultratrads probably will like Lenny Balardo. A lot. LOL Don't overestimate them.