These are the worst (religious) Christmas songs of all time 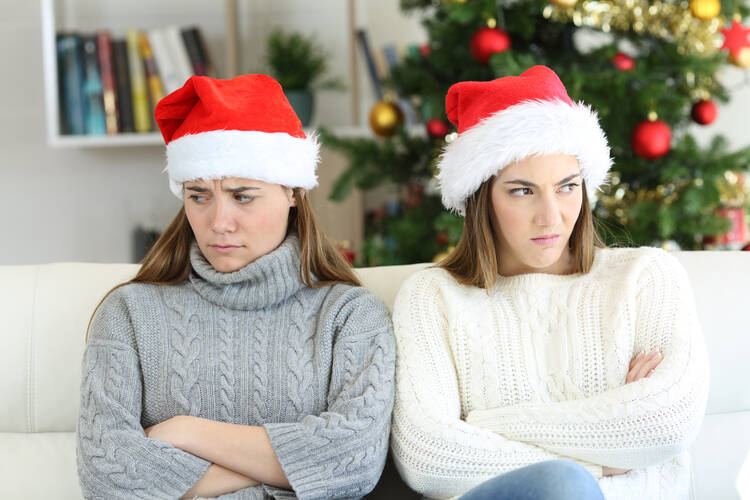 There is something inherently warm and restful about the presence of Christmas music throughout December. Even if you are feeling overwhelmed by the commercial bustle of the holidays, the simple joy of listening to carolers proclaim “O Come, All Ye Faithful” or singing “Silent Night” with a congregation during the Christmas Eve service can bring much-needed peace and quiet to one’s spirit.

Unfortunately, not all Christmas music produces the same calming effect. In fact, some holiday tunes can be downright obnoxious. Everyone has at least one Christmas song that they cannot stand, whether it’s a purposefully annoying song that is trying to capitalize on the profitability of Christmas music—such as “The Chipmunk Song (Christmas Don’t Be Late)” or “Grandma Got Run Over by a Reindeer”—or a song that is misguided (and maybe a little racist or sexist) in its approach to capturing the true meaning of Christmas. (Band Aid’s charity anthem “Do They Know It’s Christmas” comes to mind, especially with its controversial line “Well tonight thank God it’s them instead of you.”)

Everyone has at least one Christmas song that they cannot stand.

I chose tunes that could be categorized under any of the following offenses: songs that are theologically erroneous; songs that are overtly pandering to Christian audiences; or songs that simply sound terrible in their execution. Without further ado, here are five Christian Christmas songs that you should definitely leave off your holiday playlist.

Secular Christmas music certainly has some memorable holiday stinkers, but Christian and Gospel-inspired Christmas songs can also leave a sour impression on listeners.

The sentiment behind Alabama’s 1993 Christmas single “Angels Among Us” is clear: We can all glean lessons in generosity and love from the unsung heroes who perform acts of kindness and service without expecting anything in return. Put a bow on it, and that’s a wrap on every Hallmark-inspired, reason-for-the-season, contemporary Christmas message out there.

When you look a little closer at the lyrics, however, you might start to notice one or two things that don’t add up. It seems as if the song wants to be about ordinary people who step up to help strangers, unexpected “angels” who appear when we need them most. But in the song’s first verse, we are told a story about a lost boy who is led home by an older “man,” who happens to be invisible to the boy’s mother.... So the “man” is a metaphysical, spiritual agent of God? In other words, an angel.

And here is where things fall apart. If the song’s establishing case about “angels” concerns a real angel, does that imply that the other examples of good deeds outlined in the song are also performed by actual angels, not people? If that’s not the case, and the song does intend a distinction between the higher spiritual beings who walk among us and the human beings who inspire us to become better people, why isn’t that clarified in later lyrics? Furthermore, why even open the song with an actual angel if your message is supposed to be about recognizing others’ goodness? Or is that even Alabama’s message anymore? I’m so confused.

And here is where things fall apart.

If you’ve never heard of “Happy Birthday Jesus,” I sincerely apologize for introducing you to this incredibly aggravating, mawkish song from the Brooklyn Tabernacle Choir’s first Christmas album. With a half-life similar to “It’s a Small World,” you will only need to listen to this irritating earworm once for its corny chorus and simpering children’s choir to be stuck in your head for the rest of the day.

While there is nothing theologically offensive about this Christmas song, “Happy Birthday Jesus” earns its spot on this list for its annoyingly catchy melody and generic lyrics, which were composed by Carol Cymbala, a six-time Grammy Award-winning songwriter. She was clearly phoning it in when she wrote such inspired lyrics as “Happy birthday, Jesus/ I’m so glad it’s Christmas.” Other lines like “All the tinsel and lights / And the presents are nice / But the real gift is you” could have easily been copied-and-pasted from a cheesy holiday card.

The song itself is also pitchy and unintentionally languid, both in rhythm and intonation. None of the Brooklyn Tabernacle kids sound interested in what they are singing about, and the song’s slow pace makes “Happy Birthday Jesus” feel like it is dragging on longer than it actually is. Skip it.

If you’ve never heard of “Happy Birthday Jesus,” I sincerely apologize for introducing you to this incredibly aggravating, mawkish song.

I tried to steer clear of including any beloved Christmas hymns on this list. I really did. But the more I thought about it, the more I realized that I couldn’t leave a carol as theologically unsound as “Away in a Manger” off a list of the worst Christian Christmas songs. Therefore, as much as it pains me to criticize a classic hymn that I personally enjoyed as a child, it is time to hold “Away in a Manger” accountable for its lyrical sins.

In recounting the Nativity story, “Away in a Manager” makes one glaring, undeniable error: claiming that the Little Lord Jesus did not cry. Theologically speaking, this detail is simply untrue. Although nobody alive today would have been around to witness the miracle of Jesus’ birth, we know that Jesus would have cried because he was fully divine and fully human. As a full human, Jesus would have experienced all the emotions that humans experience in their lifetime: joy, sadness, anger and surprise, to name a few. Portraying the Son of God as staying inhumanly quiet despite the uncomfortable conditions of the stable, therefore, effectively prioritizes his divinity above all else. In this way, “Away in a Manger” strikes me as a little docetistic, in that its mysticism of the Christ Child’s birth only affirms Jesus’ divine nature while erasing his humanity.

“Away in a Manger” strikes me as a little docetistic, in that its mysticism of the Christ Child’s birth only affirms Jesus’ divine nature while erasing his humanity.

“Mary, Did You Know?” is a pointless and theologically shallow Christmas song. It does not even answer its own series of questions: Yes, Mary knew.

I will concede that the melody is lovely (Buddy Greene’s contribution as music composer is perhaps the song’s only saving grace), but Mark Lowry clearly was not paying enough attention to the Annunciation narrative when he wrote the song’s lyrics. In Lk 1:26-38, the angel Gabriel tells Mary that she will give birth to Jesus, the Son of God, who will be given the throne of David by the Lord God, forever rule over the house of Jacob and oversee an eternal kingdom.

So, did Mary know she was kissing the face of God when she kissed her little baby? Did Mary know that her baby boy would one day rule the nations? Did Mary know that the sleeping child she held was the great “I Am?” How many more rhetorical questions do I need to ask before I prove my point?

At least the Pentatonix cover is a jam.

Mark Lowry clearly was not paying enough attention to the Annunciation narrative when he wrote the lyrics to "Mary, Did You Know?"

If the Whos from Whoville sang this song instead of “Welcome Christmas” (or “Dahoo Dores”) at the end of Dr. Suess’s “How the Grinch Stole Christmas,” the Grinch’s heart would have shrunk into oblivion. If there are elevators in hell, this is the song that plays on loop inside of them. And if there is one reason why I pitched this article in the first place, it is so I could rant about this horrible, emotionally manipulative, disgustingly maudlin and even sinister song for hours.

Beyond the indisputable fact that this Christian downer is actively trying to manipulate listeners into sobbing buckets with a contrived story about a boy who does not have enough money to purchase shoes for his dying mother, “The Christmas Shoes” delivers a malevolent portrayal of God.

Let’s all agree to never discuss “The Christmas Shoes” ever again.

Don’t believe me? Let’s examine the song’s premise: An unnamed narrator is standing in line on Christmas Eve, “not really in the Christmas mood,” when he witnesses a young boy trying to buy new shoes for his mother, who is dying of an unspecified illness. The cashier tells the boy that he is a few pennies too short to afford the shoes (What kind of cashier turns customers away over pennies, let alone customers with unfortunate circumstances like the boy in “The Christmas Shoes”?) so the boy turns to the narrator and asks him to help out. (The more cynical side of me imagines that this sob story is a scam in an alternate universe.) The narrator agrees to buy the shoes, then reflects on how God must have sent the little boy there that night to remind him “just what Christmas is all about.”

The Accidental Christmas Standard: Wherein I discover the true meaning of 'Do They Know It's Christmas?'
Mary Valle

Essentially, the narrator’s main takeaway from this whole experience is that God purposefully made this boy’s mother sick and sent him to the same department store that the narrator was in so that the narrator could learn to just cheer up a little during the holiday season. I’m sorry, but that is 100 percent the worst way to contextualize suffering or helping others. Maybe it would have been more forgivable if the narrator had realized that God was using him in that moment to help a person in need, but that is not the theme we are left with. Instead, we are shown a God who inflicts needless suffering on others to teach some jerk the true meaning of Christmas. Thanks, I hate it.

Anyway, if you would like to listen to Christmas music that won’t give you a massive headache or lead you into heresy, check out these Spotify playlists of unconventional Advent songs or classic Christmas hymns chosen by America’s staff and contributors. And let’s all agree to never discuss “The Christmas Shoes” ever again.

@izzysenechal
Show Comments ()
Join the conversation: Login or create an account
Before you can comment, you need to update your profile to include your first and last name, as required in our comments policy. Then reload this page and you'll be set up for commenting. Update your profile
Show Comments ()
Comments are automatically closed two weeks after an article's initial publication. See our comments policy for more.