Is ‘Do They Know It’s Christmas?’ the most misunderstood holiday song? 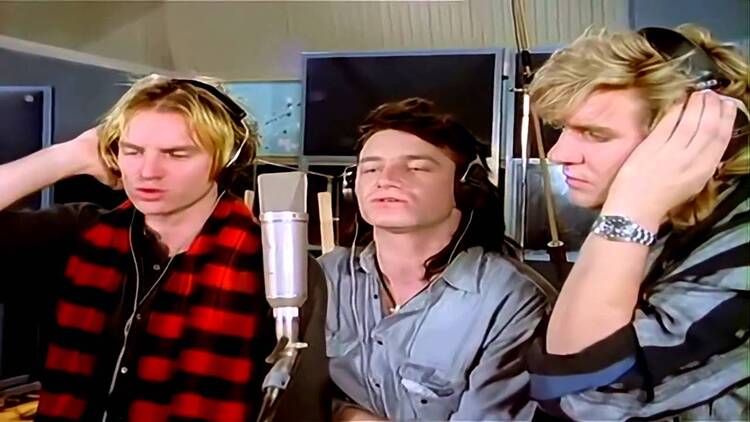 There are plenty of songs that signal the arrival of the Christmas for me. I love “O Holy Night” with the right singer and appreciate just about anything Amy Grant and Frank Sinatra have to say about the holidays. But to truly get me into the spirit of the season, I need the jolt that only Bono screaming “well tonight thank God it’s them/ instead of you” can provide. I need “Do They Know It’s Christmas?”

The 1984 benefit single by the British supergroup Band Aid is my favorite Christmas song. Written by Bob Geldof and Midge Ure to raise money to combat famine in Ethiopia, it features some of the biggest British pop stars of the day, including Duran Duran, Boy George, Phil Collins, Sting and Paul Young (not to mention New Jersey’s own Kool & the Gang).

I know that some people find Bono’s rapturous rallying cry at the end of the first verse to be troublesome and cringeworthy. But that is because the line is mostly misunderstood in the general context of the song. While he didn’t write the line, it is clear Bono is being sarcastic, pulling no punches and upping the ante on the juxtaposition between the haves (you the listener) and the have-nots (the people of Africa). Which is something the 1984 punk-influenced Bono would have done.

In 2004, when a 20th-anniversary version of the song was recorded, Bono stood by the line and sang it again. But by 2014, when Band Aid Thirty recorded a new version to raise money to combat the Ebola crisis, he may have realized that there were less divisive ways to get a message across and bring people together, singing instead, “Tonight we’re reaching out/ and touching you.”

To truly get me into the spirit of the season, I need the jolt that only Bono screaming “well tonight thank God it’s them/ instead of you” can provide. I need “Do They Know It’s Christmas?”

Of course, there are other complications with the song, as Wikipedia points out, that center around the “colonial western-centric viewpoint and condescending stereotypical descriptions of Africa.” For many people, the song suggests that the entire continent of Africa is experiencing famine and poverty, which is of course untrue. And contrary to the song’s title, there are plenty of Christians on the continent—45 percent of the population according to one recent study—who do indeed know it is Christmas, and plenty of people of other faiths who may not even care. It would be ignorant to think otherwise.

Still, I have always felt that Geldof and Ure were not being literal when asking the title question. I think they were asking it much in the way Bono was being sarcastic. They were not asking if the people suffering know about this holiday called Christmas, but asking if they can truly feel it. That’s where Band Aid comes in.

“Do They Know It’s Christmas?” takes me back to my childhood, but not because my life as a 12-year-old growing up in Jersey City, N.J. was idyllic. I was mostly miserable back then. I think that was the year my father gave me and my siblings cash in envelopes for Christmas. Or maybe it was the year we received gold chains and nugget rings. The song warms my heart because I genuinely believed that a bunch of people getting together to sing a song could make other people’s lives better. I believed we had a responsibility to one another, even the people halfway around the world, and we ought to do something about it, whether that was volunteering your time and talents to sing on a record or spending a few dollars to buy that record.

Sure, we could donate money and drop off bags of clothes at church or donate canned food during a drive at school—maybe even put some change in the Salvation Army’s red bucket. But forking over a few bucks to support the efforts of some of my favorite bands to save the world was much cooler.

Twelve is an impressionable age. I wouldn’t be surprised if “Do They Know It’s Christmas?” and its American offshoot, “We Are the World”—not to mention Live Aid in 1985—did more to inform why I have worked for nonprofits for the last 20 years than my Jesuit college education. No offense to my alma mater, but they understand; I hosted a benefit concert or two when I was there.

I believed then, and I still believe. Maybe not in benefit singles, which are mostly tepid affairs, but in the power of a bunch of people using their time and talents and money to help create change. I am a sucker for charity walks and runs and bike rides and dining out for a good cause. I’m all for on-air fundraisers and giving days. I believe we can do this.

There is another reason I love “Do They Know It’s Christmas?” While “O Holy Night,” “Joy to the World” and “Silent Night” celebrate the birth of the Christ child, and “Little Drummer Boy” nods to offering up ourselves and our talents, very few, if any, secular Christmas songs speak to the spirit of giving the season should encourage. Some wish for a white Christmas; others lament a blue Christmas. Plenty just want you for Christmas. They are all a bit self-absorbed.

The song warms my heart because I genuinely believed that a bunch of people getting together to sing a song could make other people’s lives better.

And then there’s “Do They Know It’s Christmas?,” which takes a similar tact to John Lennon’s “Happy Xmas (War is Over)” in being a bit more contemplative and conscientious about the whole thing. But while Lennon asks us “what have we done” as Christmas and New Year’s arrives, he sort of leaves it there for us to think about. “Do They Know It’s Christmas?” takes it a step further, laying it on pretty thick right from the beginning, reminding us that “when you’re having fun/ there’s a world outside your window/ and it’s a world of dread and fear.”

By the time we get to the end of the song, the guilt trip is over, and it is all pure directive. “Feed the world,” the chorus sings, “let them know it’s Christmas time.” It’s hard not to reach for the wallet, to do something, anything, to make the world a better place. It is the ultimate response to the suggestion at the beginning of the song, that “in our world of plenty/ we can spread a smile of joy” and “throw your arms around the world / at Christmastime.” What’s not to love about that?

So this season, while the Christmas mixes my wife insists we listen to fill the house and the car and we are inundated by the inescapable but pleasant sounds of Burl Ives and Mariah Carey at the grocery store and pharmacy, I wait for Paul Young to tell me “It’s Christmas time” and that “there’s no need to be afraid.” I know Bono’s on his way with a wake-up call. And I thank God for it.

Joe Pagetta is an essayist, arts writer and bicycling advocate in Nashville, Tenn. He is currently working on a collection of personal essays.

I very much enjoyed this article. First, because "O Holy Night" is also my favorite religious Christmas carol. I also grew up watching MTV ( when the network only showed videos, not programs like "The Real World," etc. ) and was in college when "Do They Know It 's Christmas?" was a hit song for a worthwhile cause. Unlike the good author, although I was "cool" in terms of going to occasional popular rock concerts, I never gave to a worthwhile charity to feed the hungry in Ethiopia. However, in my small way (donating clothes to a Catholic homeless shelter for men, and dropping change into Salvation Army kettles each time I went to the mall) I believe I gave to people in need. I agree that it's wrong to assume that people in all African nations are beset by poverty and extreme hunger. I do know a number of immigrants from Africa who work at the nursing home/rehabilitation center where I live. However, I didn't realize that there's evidence from some studies that nearly half of the continent's people are Christians. Of course, one not need to be a follower of Christ to need or be "entitled" to the necessities of life. I also agree that "Do They Know It's Christmas?" probably is the only secular Christmas song that " speaks to the spirit of giving. " After all, although worshipping the Christ Child is the true purpose of the holyday, giving to others (either material gifts or listening and lending a hand) are important to living out the meaning of Christmas. After all, Jesus taught us, "Truly, I say to you, as you did it to one of the least of these my brothers, you did it to me." ( Matthew 25: 35-40).

Thank you for a great article. When the song came out in 1984, we gave away multiple copies of the "45" as part of our Christmas gift giving. I must be honest that I also cringe when I hear Bono singing "thank God it's them instead of you". I consider it my favorite Christmas song. Thank you for describing so well why that is the case.

Thank you for this awesome article. I have the same feelings about a song Do they know it's Christmas, I was almost a teenager when I heard it and fell in love with it. Also I wrote a small article here https://familyessay.org/ about my vision of this song. This Christmas song is the most truethful and sincere. The song is number one for me, even thought I don't like Bono.