Is ‘Silent Night’ the greatest Christmas song ever? 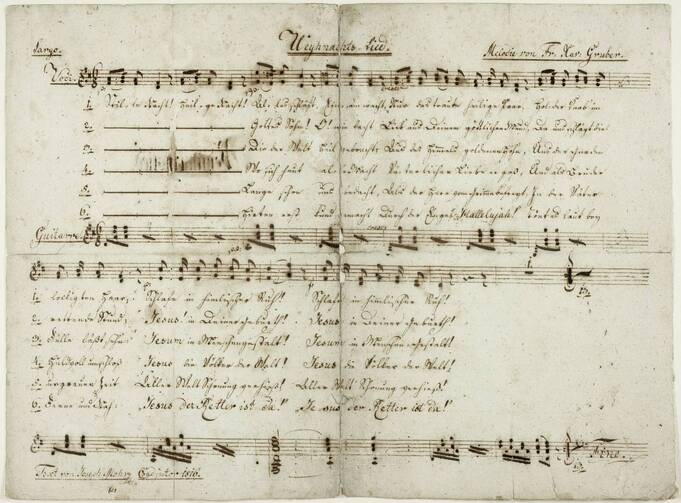 The hills around Salzburg are alive, we hear, “alive with the sound of music.” Young and old, the people sing and hum and strum. The water in the brooks laughs as it trips and falls downstream. Church chimes sigh with the breeze.

This music, we also hear, has been sung for 1,000 years. Maybe. But one song—probably the most famous—is celebrating only 200 years. On Christmas Eve 1818, in the church of St. Nicholas in Oberndorf near Salzburg, “Stille Nacht” (“Silent Night”) was sung for the first time.

The Rev. Joseph Mohr wrote the words to the hymn as a reflection on peace after a summer of violence in Salzburg.

The words to “Silent Night” were the work of the Rev. Joseph Mohr, a young priest in Oberndorf. He wrote them in 1816 as a reflection on peace after a summer of violence in Salzburg. On Christmas Eve two years later, he asked his friend Franz Xaver Gruber, a schoolteacher in the neighboring town of Arnsdorf and also the organist in Oberndorf, to set his words to music. Gruber did so, and together that evening at Christmas Eve Mass, the two performed “Silent Night” for the gathered faithful, Mohr singing and Gruber playing the guitar, since the church organ was not working. “Silent Night” was an immediate sensation.

The story of the carol’s origin was lost for a couple of decades, even as Tyrolean choristers performed it across Europe. In Berlin, people tried to trace its origin. In 1854, the Royal Hofkapelle (court orchestra) in Berlin contacted the Archabbey of St. Peter’s in Salzburg to research the composer of the carol. It was thought the composer might have been Johann Michael Haydn (1737-1806), Joseph Haydn’s younger brother. Felix Gruber, Franz Xaver Gruber’s son, was a boy chorister in St. Peter’s at this time. He directed the query to his father. This made Franz Xaver Gruber aware of the importance of the carol, and he wrote a statement about it, “Authentic Origination of the Composition of the Christmas Carol ‘Silent Night’,” and sent it to Berlin. The Stille Nacht Museum in Hallein, near Salzburg, in the house where Franz Xaver Gruber lived for 28 years, keeps two drafts of this letter, thus documenting the creation of the carol in Salzburg as well.

The carol has been translated into some 300 languages. The first English translation appeared in New York City in 1851.

The carol has been translated into some 300 languages.

On Sept. 29, 2018, commemorative exhibits about the carol opened in Salzburg and eight neighboring towns. The exhibit in the Salzburg Museum brings together documents and artifacts relating to the carol. It has copies of Gruber’s letter and early scores.

The first room, the Christmas Room, shows how Advent and Christmas have been celebrated in the area. Next is a room with music boxes, metal records, 78s and Decca’s recording of the song by Bing Crosby, as well as versions by Mahalia Jackson and the Trapp Family Singers. A guide at the museum explains that Bing Crosby’s recording was the best-selling song of all time from its introduction in 1948 until 1997, when Elton John’s “Candle in the Wind” tribute to Princess Diana topped it.

The carol was used to build up spirits of soldiers getting together for a short Christmas respite from fighting in 1914. In 1941, Franklin D. Roosevelt and Winston Churchill stood on the balcony of the White House and joined the crowd gathered in front to sing the carol.

The Salzburg exhibit also shows how the song was used for commercial and propaganda purposes. One gruesome rendition changed the words to tell how on this “Stille Nacht, Heilige Nacht, Alles ruht, Einer wacht” (“Silent night, holy night, all is calm, one is awake) and then asserts that this one is “Adolph Hitler” who “führt uns zu Größe, zu Ruhm und zum Glück…” (“leads us to greatness, to fame and to fortune…”). Tributes this year include a six pack of beer with one of the carol’s six verses on each bottle. There is also a potent drink named Stille Nacht marked “feel good.”

The exhibit’s last room is a place of quiet marked with a sign: “Laut sein ist cool! Still sein auch.” (“It’s cool to be loud. Also to be quiet.”) This beautiful Christmas carol brings stillness with its soothing melody and gentle words, “Sleep in heavenly peace!”

“All Is Calm: The Christmas Truce of 1914” by Peter Rothstein is an a cappella musical about the moment when enemy soldiers came out of the trenches and laid down their arms to celebrate Christmas together, a respite from the horrors of war.

Christmas carols are the most beautiful songs ever written [IMO]. Silent Night is also a beautiful lullaby. I just recently read that it was sung to George Bush as he lay dying. I love them all; my favorites, if I had to pick, are; Oh Come, oh Come Emanuel,for the music or cadence;whatever it is called; the sound, and for the words; "that mourns in lonely exile here," and O Holy Night; the line; "the night when Christ was born" I just have to hear the song in my mind. and that line gets me every time.

I appreciate Silent Night, Holy Night as a tender and uplifting Christmas song celebrating the birth of Jesus. But my favorite is, O Holy Night. It also seems to me regarding the first song, it's lead-line is flawed in that the First Christmas must have been anything but a "silent night, . Yes without doubt a "holy night," but far from "silent" considering what new born infants do, yelp for Mother's breasts needing sustenance and comfort. Or as Augustine put it, "Mary gave milk to our Bread," the Bread of Angels, the Blessed Eucharist. Bread and Milk, children.s food.

Also with no room at the Inn, other homes crowded with travelers given shelter for a charge no doubt, along with other travelers forced to find space in an Animal Shelter where Joseph took his very pregnant wife, Mary, ready for delivery, amid the running around, laughter, fun time for small children with parents, some in tears. So yes, the First Christmas a "HOLY NIGHT" A "SILENT NIGHT" too? My wife and I as parents and grandparents know the answer!

The greatest Christmas song ever is the original one, the Magnificat.