In ‘A Hidden Life,’ martyrdom is the cost of faith 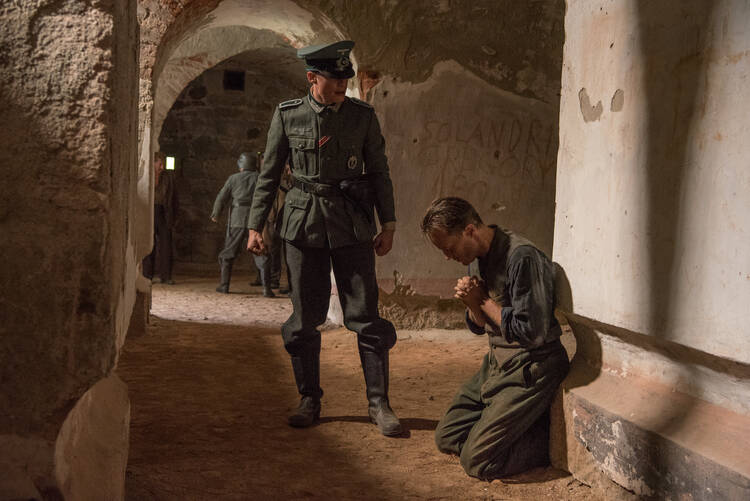 In February 1943, upon receiving a summons for conscription into the German Wehrmacht, the military forces of Adolf Hitler, the Austrian farmer and Third Order Franciscan Franz Jägerstätter sealed his eventual fate: martyrdom.

Rejecting his summons and refusing to swear allegiance to Hitler, Jägerstätter, who was beatified in 2007 by Pope Benedict XVI, was arrested and sentenced to death by the Reich’s War Court. He was executed via guillotine that August in Brandenburg an der Havel, leaving behind his supportive yet devastated wife, Franziska, and their three young daughters.

A casualty of his own convictions, Jägerstätter chose nonviolent resistance to Nazism because of his deep Catholic faith. He is the subject of the new Fox Searchlight picture, “A Hidden Life,” directed by Terrence Malick. On Dec. 4, the film screened at the Vatican, with Mr. Malick in attendance. The film will be released in New York and Los Angeles on Dec. 13.

A casualty of his own convictions, Franz Jägerstätter chose nonviolent resistance to Nazism because of his deep Catholic faith.

A three-time Academy Award nominee, Mr. Malick approaches filmmaking from an unusual intellectual background. Prior to enrolling in the AFI Conservatory in the late 1960s, he taught philosophy at the Massachusetts Institute of Technology.

He professed a particular interest in the works of German existentialist Martin Heidegger, translating his work. It is perhaps not surprising that the films of Mr. Malick, including “Days of Heaven” and “The Tree of Life,” readily interrogate the human condition and explore the complexities of behavior and the divine.

This film is not a run-of-the-mill war picture, turned blood-red by gruesome battle sequences or littered with pyrotechnic spectacles. “A Hidden Life” is, in many ways, a quiet film about a quiet man whose refusal to participate in evil was the fruit of his trust in Christ.

Elisabeth Bentley O’Neal, a producer on the film, explained its concept. “There is a battle, there’s a war that takes place inside the heart of each person who will go and fight. And that’s the battle that this film explores,” she said in an interview with America. Ms. O’Neal, who wrote an early draft of the screenplay, detailed the process of bringing Jägerstätter’s story to the screen.

“It was quite a personal project for me. I knew the story of Franz Jägerstätter’s life quite well because my father was one of the founders of the Pax Christi [USA] Center on Conscience and War in Cambridge, Massachusetts in the early ’80s,” she said. Ms. O’Neal, who describes her father as “a lifelong pacifist” involved with the Catholic Worker movement, was also acquainted with author Gordon Zahn.

Conducting research in West Germany for his 1962 book, German Catholics and Hitler’s Wars: A Study in Social Control, Mr. Zahn learned of the story of Jägerstätter. Mr. Zahn then authored In Solitary Witness: The Life and Death of Franz Jägerstätter, published in 1964.

Franz Jägerstätter: The Austrian farmer who said no to Hitler
Willard F. Jabusch

Still a Prophet: Gordon Zahn and the danger of 'milieu Catholicism'
William A. Au

Around 2006, Ms. O’Neal was writing about the 1937 Nanking Massacre, also known as the “Rape of Nanking,” in which Japanese forces invaded the capital of China and murdered some 369,000 civilians. This project drew her into a further investigation of World War II, which “finally gave [her] a very deep appreciation, much deeper appreciation, of what Franz Jägerstätter’s witness really meant, what it cost.”

“I began to consider differently what the process of discernment must have been,” she said.

In 2010, Ms. O’Neal made her way to Sankt Radegund, the small Austrian village once home to Jägerstätter. There, she spent time with the family, including Franz’s elderly wife and his second-oldest daughter, Maria Dammer.

Prior to Ms. O’Neal’s Austrian sojourn, Orbis Books, a Catholic publishing house, released a volume of Franz Jägerstätter’s collected letters from prison. The volume, Franz Jägerstätter: Letters and Writings from Prison, was edited by the Austrian theologian Erna Putz, a friend of Franziska Jägerstätter. Her book, which includes an introduction by author and peace activist Jim Forest, laid the foundation for “A Hidden Life.”

Franz Jägerstätter is an example of “somebody who believes that to be a Christian, or a Catholic in this case, is to take literally the commandments of Jesus.”

“In the letters, you see the deep relationship between Franz and Franziska, and out of his letters you get the information that he was willing to serve as a medical orderly,” said Ms. Putz. In 2006, Ms. Jägerstätter expressed to her an interest in translating her letters to Franz. “Franziska handed [the letters] over to me, physically,” said Ms. Putz, describing the feeling as “like fire in my hands.”

Orbis publisher and editor in chief Robert Ellsberg called Franz Jägerstätter an example of “somebody who believes that to be a Christian, or a Catholic in this case, is to take literally the commandments of Jesus.”

“He was, in some ways, a very ordinary man. He had real responsibilities as a husband, as a father, as a member of his community. And what he did placed a very heavy burden on the rest of his family. The other thing that is, I think, significant, is that he did this without any expectation that it was going to make a difference or that anyone would know about it,” Mr. Ellsberg told America.

The question then remains: What made Franz different? What set him apart from his fellow villagers, some of whom considered him a traitor, and from Catholic bishops who did not risk imprisonment or death to oppose Hitler? The answer, apart from Franz’s stalwart adherence to the teachings of Christ, is a difficult one.

“It’s a mystery. Of course, he had become a very devout Catholic. And when we look back from our perspective today, it seems self-evident that while what he did was heroic, it was a very clear application of the moral teaching of the Gospel,” said Mr. Ellsberg. “He heard the Gospel mandate, commandment, imperative that virtually no one else heard.”

Many were initially opposed to Jägerstätter’s drastic decision. “The village was embarrassed by him and so was the local church,” Jim Forest said in an interview with America. Mr. Forest said that public opinion towards Jägerstätter did not begin to shift until Thomas Roberts, the Jesuit archbishop of Bombay, “brought the story of Franz Jägerstätter to the Second Vatican Council.”

Mr. Malick attempts to represent “spiritual states and challenges in the human experience.”

Mr. Forest also named Jägerstätter as an important influence on religious conscientious objection. “Being aware that we have a conscience and that we need to take responsibility for its formation is one of the most important, and at the same time, most neglected areas of pastoral life,” he said.

In our current political climate, “resistance” has become a political buzzword. “I Am Part of the Resistance Inside the Trump Administration,” read the headline of a controversial, anonymous op-ed published last September by the New York Times. I asked Ms. O’Neal if in the context of resistance in 2019, “A Hidden Life” could be considered a political film. Ms. O’Neal said she considers that view “reductive.”

“I do think Terry [Malick] would say the film’s not political,” she said, adding that Mr. Malick attempts to represent “spiritual states and challenges in the human experience.”

But this is not to say that the life and witness of Franz Jägerstätter bears no relevance to today. Quite the contrary, according to Mr. Ellsberg. “It is a timeless story. It doesn’t just belong to that era and if it speaks to our own era in an important way I think it’s because in some ways the stakes are also very high in our time,” he said.

When asked how we can understand Jägerstätter today, Ms. Putz suggested this: “You have to ask what is true, what is right, what is just.”

Correction, Dec. 7: A previous version of this article misidentified Erna Putz as the translator of  Franz Jägerstätter: Letters and Writings from Prison. Ms. Putz edited the volume, which was translated by Robert A. Krieg.