Franz Jägerstätter: The Austrian farmer who said no to Hitler 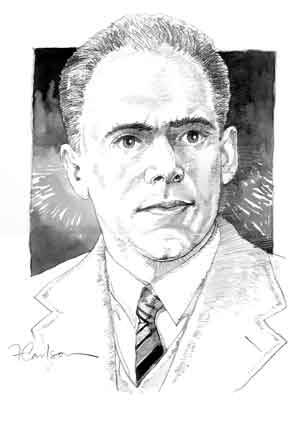 In Braunau am Inn in upper Austria, some curious people stop to gawk at the “Hitlerhaus” where the infamous man was born and raised. They would be wise to continue on a few more kilometers to the little village of St. Radegund, where a far different sort of person lived. The place is very small: only a beer house, a few houses and a modest church. It is considered so insignificant that the village does not even appear on some detailed maps of Austria. But this may change considerably in the near future. St. Radegund’s most famous citizen, Franz Jägerstätter, was named an authentic martyr by Pope Benedict XVI in June 2007.

Does being a martyr make one, ipso facto, a saint? Certainly the young Franz did not appear very saintly. He was a rowdy type, known for getting into brawls with the other young men of the area. It would seem that he fathered a child out of marriage and then disappeared for a year or so, going to another part of the country to work in the mines. When tempers had cooled he returned, fell in love with a local girl and married her. The lovely Franziska was just what this undisciplined young man needed. She was lively and full of fun, but also mature and deeply devout. For their honeymoon they traveled by motorcycle all the way down to Rome and back, a trip unheard of in rural Austria. Franz was, as everyone said, a lustiger Mensch (“lively fellow”), who had found the perfect partner.

Does being a martyr make one, ipso facto, a saint? Certainly the young Franz did not appear very saintly.

He became quite devout himself. Neighbors said they could hear him singing hymns as he worked the family farm. He became friends with the Rev. Josef Karobath, the pastor, who named him sacristan and put him in charge of training the altar servers, planning the holy day celebrations and caring for the church.

But some serious political changes were taking place at the time. Franz was the only one in town who voted against the annexation of Austria by Germany. The German army entered the country and was greeted with wild enthusiasm. Hitler made a triumphal entry into Vienna and was met by the Cardinal Archbishop. Franz was one Austrian who was not pleased.

A year later Poland was invaded. Franz decided he could not in conscience serve in such an unjust war. Poland had not invaded Germany; Germany had invaded Poland and, very soon, other countries. Many of his friends were enlisting; others waited to be drafted. Franz told his wife, his mother and his pastor that he would not serve. Father Karobath was understanding. In fact, soon he would be removed from his parish for having delivered a less than totally patriotic homily. But he reminded the younger man that his widowed mother, his wife and now his three tiny daughters depended on him. Franz decided to seek advice from the bishop in Linz.

But the bishop simply lectured him about the other young men who were fighting and dying in Russia in defense of the fatherland. He should do the same.

Franz’s determination would not be eroded. For a long time the induction notice did not come. The government needed farmers like Franz for the war effort. But as the war took more and more lives, older men and even boys were being sent to the front. The notice came in the mail: Franz was needed in the army. There could be no such thing as a conscientious objector.

Franziska remembers that she and Franz got up early in the morning while the grandmother and the three girls were still asleep. Would she ever see him again? They said their farewells and he walked off into the pre-dawn darkness toward the induction center. He refused to take the oath of obedience to Hitler and was quickly put into jail in Linz. He was held there for some time and sent some truly beautiful letters to his wife. Eventually he was sent to a dreaded prison in Berlin.

The notice came in the mail: Franz was needed in the army. There could be no such thing as a conscientious objector.

Franziska very much wanted to visit him. The new young priest who had taken the place of Father Karobath said he would accompany her. They set off by train although the Americans and the British were bombing the rail lines. At the prison they could see through a window that Franz was brought in a van, pulled out and knocked to the ground. Yet he was allowed to visit with them. The priest repeated some of the old arguments: there was still time to change his mind; he could still be saved. But Franziska knew that to her strong-willed husband, saving his body was not as important as saving his soul. For him it was a clear case of right and wrong: the war was unjust; he could not serve.

Controversial Even in Death

He was taken away, and the two visitors made the dangerous trip back to St. Radegund. Franz was beheaded by the prison guillotine. When the war ended, the prison chaplain, who knew where the body had been buried, had the bones put in a box. A nun agreed to take them back to St. Radegund for burial. Father Karobath had returned as pastor and he announced that Franz would be given a solemn funeral and buried in a place of honor directly next to the church.

It was a dangerous and risky business to say no to Hitler’s insane war.

Many did not agree, however. Their sons, brothers and husbands had fought and died in Russia, Italy, France and Germany. They were the heroes, not Franz, a man who had refused to serve. When his name was carved with those of other war dead into a village war memorial, the name was defaced. But Father Karobath would have none of it. Franz was worthy of solemn burial. The monument would be repaired and flowers planted on his grave.

As the years have passed, the local people have taken a more positive view of Franz Jägerstätter. A little museum has been opened in the old farmhouse. Some photos, a rosary and a prayerbook are on display there and, of course, his motorcycle helmet. People have started to come as pilgrims. They pray in the church where he prayed and stop by his grave, which is in an honored place just outside.

There were, I think, two priests in Germany who were executed as conscientious objectors, but Franz seems to have been the only layman. It was a dangerous and risky business to say no to Hitler’s insane war. Could he have done it without the support of a strong and loving wife? Now, however, his three daughters know that their father was a martyr. And martyrs are saints.

The beatification ceremony for Franz Jägerstätter will take place on Oct. 26, 2007, in Linz, Austria.

The Rev. Willard F. Jabusch is chaplain emeritus of the University of Chicago.

Show Comments (
3
)
Comments are automatically closed two weeks after an article's initial publication. See our comments policy for more.
David Begin
15 years 5 months ago
This is inspirational to us in this day and age. A verse in one of the 90th psalms declares: "Who will stand for me against the workers of iniquity?" Each of us needs to be in communion with the Lord. He has given us the Holy Spirit as our comforter and teacher, John 15. There are many issues today! Are we each taking a stand and walking with that conviction?
Bruce Snowden
15 years 5 months ago
"One Man's Decision" telling about a rowdy, brawling and amorous youth who may have fathered a child out of wedlock,later marrying a strong, devout woman, himself becoming strong in the Faith and subsequently enduring martyrdom, following resistance to Hiltler's military call, reminds me of Blaise Pascal's words, "The heart has its reasons that reason doesn't know." Would Franz Jagerstatter soon to be Beatified as a martyr have been so successful without the support of his stong, devout and loving wife Franziska? I doubt it.Love makes all things possible!
15 years 5 months ago
While Fr. Jabusch's article nicely captures the significance of Franz Jaegerstaetter's life and witness, he left out an important detail about the story. None of us would have heard of Franz if Gordon Zahn (a formerly frequent contributor to this magazine) had not researched and written his book, "In Solitary Witness: The Life and Death of Franz Jaegerstaetter" in 1964. This book is still available from Templegate Publishers. During the 1980s, when I worked with Gordon at the Pax Christi Center on Conscience and War in Cambridge, Mass., he visited Rome a couple of times to provide further background on Franz's life to the Congregation for Saints; Gordon dreamed of the day when the Church would officially hold up Franz as a model for all Catholics as a faithful conscientious objector to war. Sadly, Gordon is today trapped in the prison of Alzheimer's disease and is not able to share our joy in hearing the wonderful news of the beatification of the martyr Franz. But how happy will Gordon be when he is greeted by Franz in heaven!