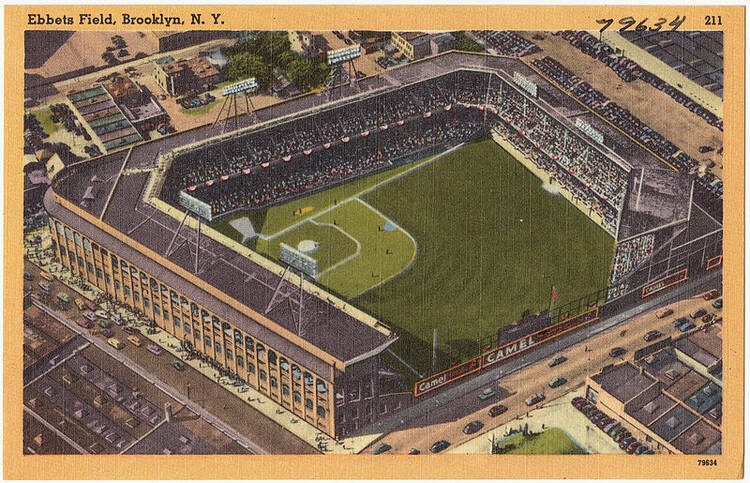 A postcard from the Acacia Card Company of Ebbets Field, home of the Brooklyn Dodgers from 1913 to 1957. (Wikimedia)

For many baseball fans, the magic of the ballpark is always present, but it can be difficult to articulate the source of that feeling. Is it the lush green of the field? The intimacy of the seating? The way the park rises from its surroundings?

According to Paul Goldberger, an award-winning architecture critic, the magic of the ballpark comes from all those things and is also deeply tied to baseball’s urban nature. In Ballpark: Baseball in the American City, Goldberger expertly examines baseball’s urban roots and how the architecture of ballparks reflects the way Americans have viewed cities and the game over time.

Baseball’s first venues were usually simple wooden grandstands, which gradually gave way to the “golden age” of ballpark architecture. The sport’s growth and legitimization in the first decade of the 20th century led to the construction of legendary parks like Ebbets Field, Tiger Stadium, Fenway Park and Wrigley Field to keep up with demand and adapt to the times. These stadiums blended well into their urban fabric, created intimate experiences, were aesthetically pleasing and functional and respected the game’s quirks. But among these iconic parks, only Fenway Park and Wrigley Field remain in use today.

Ballpark also discusses baseball’s move from the city to the suburbs immediately following World War II. Most of the golden age parks were torn down and replaced with stadiums that had seas of parking spaces and unremarkable architecture. “Concrete donuts,” which arose in the 1960s and 1970s in response to changing economic and popularity factors, were intended to serve the needs of football and baseball teams, but ultimately served both sports poorly.

According to Paul Goldberger, an award-winning architecture critic, the magic of the ballpark is deeply tied to baseball’s urban nature.

Goldberger concludes with the Camden Yards’ “retro revolution” and future ballpark trends. Baltimore’s Camden Yards proved that baseball could successfully return to the city while respecting the game and its architectural heritage. The parks that followed incorporated these lessons with varying success.

The most recent evolution of the baseball park is the emergence of ballpark-entertainment complexes, such as The Battery Atlanta. These areas contain team-owned entertainment zones just outside the ballpark that try to imitate the urban nature of early parks without recreating it. And that is exactly what makes them such a poor concept. Baseball parks have always served as a unique reflection of their unique city. That uniqueness creates authenticity, and it is why sterile public-private theme parks are no substitute for the real thing. They are simply inauthentic.

Ballpark is an epic work and an excellent contribution to the discussion of baseball’s past, present and future. It perfectly articulates what baseball has meant and continues to mean in the context of the American city, and is well worth reading for architecture buffs and baseball fans alike.

Dominic Lynch is a writer from Chicago; he publishes the website The New Chicagoan.