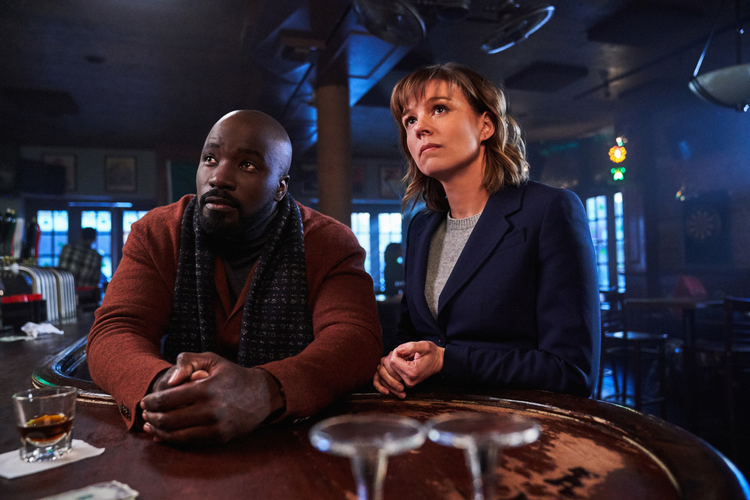 David Acosta (Mike Colter) is a Catholic seminarian working as an “assessor” for the diocese and Kristen Bouchard (Katja Herbers) is an investigator in “Evil” on CBS.

After grilling him for more than 18 hours, Kristen is desperate. She stands and asks Orson a strange question: “Are you Catholic?” He says no and asks if she is herself. “Not anymore,” Kristen says, before dragging her finger across the dusty table between them, forming the sign of the cross. She sits and then calmly recites the Our Father—until Orson leaps across the table, tackling her to the floor. He mumbles something in Latin while it takes several guards to pry him away.

It is a great set up for a television series—and yes, the comparisons to Scully and Mulder are warranted.

Moments before that dramatic scene, Kristen had been offered a crucifix by a mysterious man, “for your own protection.” She soon learns that man is David Acosta (Mike Colter), a Catholic seminarian who is also working as an “assessor” for the diocese. His job: investigating unexplained phenomena in order to recommend whether an exorcism is appropriate. After seeing her testify in court about Orson’s disturbing case, David shows up at Kristen’s house later that night to ask for her help. Colter delivers his surprising lines calmly and effectively—and although Kristen is a science-minded skeptic, she is also a lapsed Catholic.

It is a great set up for a television series—and yes, the comparisons to Scully and Mulder from “The X-Files” are warranted. Yet Dana Scully, the skeptic, was the Catholic, and Fox Mulder, the believer, was an atheist. The two main characters of “Evil” are on varying modes on the spectrum of Catholic practice, but they are both Catholic in culture and identity.

The result is a tense, engaging and fascinating story dynamic. The show fronts the word evil in its title, its action and its morality. In doing so, a primetime show on mainstream television names that which is evil and invites a discussion about it—acknowledging that evil is a real force in our world.

The show fronts the word evil in its title, its action and its morality.

Kristen thinks evil exists in the world—but the type of mundane evil that she testifies about in court trials, not demons and possession. “I want your skepticism,” David tells her. She is willing to help, but mostly because she needs the money. She and her husband are former mountain climbers. She conquered five of the seven highest summits and then stopped once she had kids. Her husband, she says, is still climbing—although that might be a nice way to say he is gone.

A third character adds another layer of skepticism. Ben Shakir (Aasif Mandvi) is a quiet, meticulous contractor, who met David when he was doing work on the rectory. An expert on buildings and structures, Ben knows most things that go bump in the night have prosaic explanations. He’s a partner to David, not a foil; he thinks “there’s an explanation for everything,” but he respects that David “is a believer.” Kristen also respects David. When she tells him that “she’s only doing this to pay off her student loans,” it is meant as a confession, not as a dig—and the line also feels steeped in penance. Kristen’s former faith shadows her current skepticism. She is still Catholic, and David’s belief might just open the door to her return.

David has great lines—and Colter is a fine actor. “Science is only good for repeatable phenomenon,” he says to Kristen, “and most of life, the most interesting parts, don’t repeat.” “Evil” doesn’t quite claim that we need to choose between science and faith; after all, David needs Kristen’s help and skepticism. But the show demonstrates what many Catholics already know, and yet what many don’t know about Catholics: that faith and science are symbiotic. This is a source of tension and conflict between David and Kristen, but also their shared bond.

Viewers beware: this is not simply television catechism. “Evil” is frightening.

The show’s theology is interesting, but viewers beware: this is not simply television catechism. “Evil” is frightening. As Kristen becomes more involved with Orson—whose defense claims that he is possessed by a demon named Roy—she starts experiencing horrific night terrors. Frozen in bed, she sees a demonic, incubus-like figure prowl across her room. Named George, he is a perverted trickster that delivers the show’s most obscene moments. “Evil” does go for the jugular, and yet the scares are strangely affirming: the show takes evil seriously.

The demon physically harasses Kristen, but his mental abuse is possibly worse. He knows that she is attracted to David. It might seem like a predictable television trope—woman attracted to handsome priest (in training)—but both Kristen and David have secrets that complicate her feelings. The pilot episode of “Evil” moves at a strong clip—with well-calibrated twists that suggest Orson’s alleged possession is not what it seems. He seems to be a pawn in a larger, more sinister game.

‘Evil’ is the rare mainstream television show that has a black Catholic as a main character.

Demonic possession is not new to television. The recent, short-lived reboot of “The Exorcist” likely faltered because it paled in comparison to the original film, but “Evil” has a different element: it is the rare mainstream television show that has a black Catholic as a main character. David’s Catholicism is neither tokenized or exoticized in the show—it is a welcome shift from the absence of black Catholics in narratives.

Such depictions have been sparse. “Tarzan,” a short-lived NBC series that aired during the 1960s, included a guest appearance by Diana Ross and the Supremes (Mary Wilson and Cathy Birdsong). They play Catholic nuns who lobby a tribal chieftain (James Earl Jones) to allow construction of a hospital in a rural village. They sing a moving rendition of “The Lord Helps Those Who Help Themselves” as part of their appeal. The episode has some interesting moral complexity—Ross’s character, Sister Therese, grew up in the village and struggles to convince the skeptical residents that her Catholicism is a peaceful, and not colonial, force—but the story arc ends with the episode’s conclusion.

Years later, “Something Sacred,” a two-part episode of “Homicide: Life on the Street,”depicts how a Sister Dyanne Attwood (Leslie Silva), a black Catholic nun and community worker, becomes involved in a murder case. Guatemalan political refugees are arrested for the murder of two Baltimore priests. Sister Dyanne directs the Catholic Friends of Central America and advocates for the innocence of the men. The men are eventually cleared of the crimes, but are still deported. Her strong moral sense rubs off on the investigators, even causing one to reflect on the Latin Mass of his youth: “there was something to that Latin. I mean, maybe believing in God is supposed to be mysterious,” he says. “The mystery made it special to me.”

In contrast, David Acosta is no guest star; he centers the moral sense of “Evil.” “The world is getting worse,” David says late in the episode, “because evil is no longer isolated. Bad people are talking to each other.” Something has to be done to fight back. His words feel true; they are the words of a believer.

It might be helpful to include when the show is scheduled...

Pretending that demonic forces take over and direct evil in this world is offensive to any believer. People chose to do good or bad, if not, how can you ever punish criminals?

Unless you can guarantee you will catch every demon, you cannot act as if doing wrong is the criminal's fault, you cannot punish crime.

If you believe in demonic possession then you do have a very good case against the death penalty, or any imprisonment, and shutting down the for profit prisons would be a very good thing, but that still does not make it true.

This is just another case of profiting from fear and suffering. Enough already.

Oh, and please remember, this also lays the blame for evil on God. You cannot have demonic possession if God does not allow it.

Though I do admit the present US Administration does seem to support the idea, still it's really a case of 45's parents did not love him, not that Satan possessed him.

@ Robert Klahn The show I've not seen. It's fiction and I'm sure people will digest it as such, which doesn't mean there is no semblance of truth, but most people can draw these distintions.

You're opening statement: "Pretending that demonic forces take over and direct evil in this world is offensive to any believer..... " Well, the operative word there IS pretending.... as such, it's NOT offensive to THIS believer.
Then you proceed to bring DJT into this "argument" (really declaration, or proclamation, however poorly arrived at). How? Why? Are you trying to "buttress" your position.

Somewhere in this mess you've thrown up against the wall, like so much spaghetti, there is a reasonable argument, but it merits a response because it just shows how poorly formed our young people are in constructing cogent arguments (I'm going to assume the person is young, because of the lack of discretion, and a Catholic, because, well, this is AMERICA).... as this is fairly representative of so many of the comments I read in response to the various columns on this site.

Catholics: do better. We can, we must. The world depends on it.

This article also appeared in print, under the headline “Evil is out there,” in the September 30, 2019, issue.