Netflix’s ‘Mindhunter’ explores the monsters within us 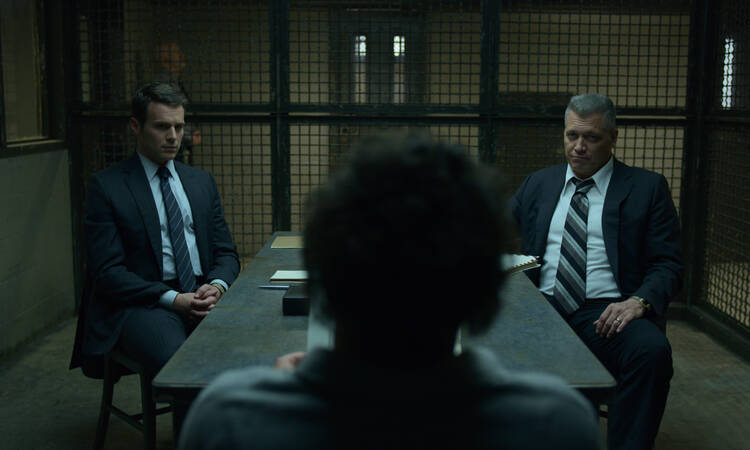 Early in the second season of Netflix’s F.B.I. serial killer show “Mindhunter,” lead agent Bill Tench (Holt McCallany) visits Wichita, Kan. to consult on a pair of murders. He walks through a home where a family of four had been tortured and murdered, and later he questions a young man who had escaped from what appears to be the same killer. There are no reenactments nor any signs of bloodshed shown; mostly we just watch people talk. And yet somehow both scenes are deeply disturbing.

It is the sound design that creates the effect. In each scene a tone plays repeatedly throughout, like a quiet siren in the distance—rising and falling and yet never going away—keeping alive the sense that something terrible is coming. Hints of melody also float in and out, creating a sense of some larger terrain beyond, as though below the scene we are witnessing lies a chasm.

Based on the true story of the F.B.I. unit that began the profiling of serial killers in the 1970s and 80s, “Mindhunter” seemed absolutely unnecessary when it debuted in October of 2017. You could fill an entire library with books, films and TV shows dedicated to serial killers ever since a creepily self-contained Anthony Hopkins came roaring into the public consciousness in “The Silence of the Lambs” in 1991.

Over the years the tales of serial killers have taken on an increasingly wide variety of forms, from gritty true crime like Michelle McNamara’s startling search for the Golden State Killer in I’ll Be Gone in the Dark, to portraits of specific moments in time, like Quentin Tarantino’s recent cathartic “Once Upon a Time…in Hollywood,” about Charles Manson, to even, in the television series “Hannibal,” a hallucinogenic love story.

You will find no fetishized crime scenes in “Mindhunter,” no killers presented as urbane geniuses.

And yet even as “Mindhunter” leaned into some of the genre’s conventions—the show’s main conceit is Tench, his visionary-but-troubled partner Holden Ford (Jonathan Groff) and psychologist Dr. Wendy Carr (Anna Torv) interviewing notorious serial killers—the series has turned heads for its absolute refusal to engage in others. You will find no fetishized crime scenes in “Mindhunter,” no bulletin boards covered in pictures connected by red string and no killers presented as urbane geniuses.

The series takes the horror of its crimes seriously; grief and outrage for the families of the dead often hang over everything. This is particularly true in the new season, in which Tench’s team is tasked to use what they have been learning to help stop the serial killer or killers who abducted and murdered dozens of black children in Atlanta from 1979 to 1981. The mothers of the dead children appear frequently, demanding justice.

They dare not step hard or look down, for fear of what they may see.

Meanwhile in talking with murderers like Ed Kemper (the “Co-ed Killer”) or David Berkowitz (“Son of Sam”), the detectives find themselves confronted simultaneously by the brutality and banality of human existence, endearing idiosyncrasies married to unplumbable subterranean depths. And not just in the killers: Each of the main characters has a sense of something within themselves that they find deeply wrong, something just out of sight in the deep.

And each protagonist refuses to shine a light within, to confront what they fear. They live with a constant sense of dread, burying themselves in work and compulsion to try and outrun the whispers they hear in the dark about things like their sexuality, their sense of powerlessness, their feelings of responsibility.

As the new season goes on, we begin to realize the soundscape of the show is an expression not of the killers’ spooky internal states but the agents’ own life-on-an-eggshell experience of reality. They dare not step hard or look down, for fear of what they may see.

What is hopepunk and why is it so quintessentially Catholic?
Jim McDermott

Why we need both God and medicine to overcome trauma
Michael R. Lovell

In the Gospels Jesus regularly told people not to be afraid. “Mindhunter” offers a meditation on how Christ’s words might be both wisdom and warning. The more we suppress who we are and give into fears of ourselves, the deeper we allow the darkness within us to become.

At one point in that early episode in Kansas, where Tench is investigating the man who would go on to become known as the “B.T.K. (Bind, Torture, Kill) Killer,” he questions a young survivor in a car. Amid the tones and hints of melody in the score, we hear the rumbles and horn of a train approaching. At one point the camera shifts outside the car, and we hear the train for the first time in full, its horn shrieking as it roars along the tracks somewhere nearby.

In most stories a moment like that would indicate the climax of the scene. But when we cut back inside the car the urgent sounds of the score remain, implacable, inescapable. The nightmare is still ahead, always coming.

"The more we suppress who we are and give into fears of ourselves, the deeper we allow the darkness within us to become." Well put. Unfortunately, the church most Christians grew up in taught them to do just that, in centralizing a concept (original sin) that imparts an overstated sense of one's own evil deeply into one's own psyche (excluding serial killers of course, who don't care). This creates guilt and fear, in a false sense of separation from an angry God who demands restitution for one's own evil, which if not satisfied in this life, will be satisfied in the next through eternal torture. This depicts God as a serial killer, which He of course is not, but for some of us, a very difficult deprogramming must occur to see that.

The best show on TV, in my opinion. And they all blame their Mothers...!