Four new Broadway shows attempt to answer the question: What are musicals for? 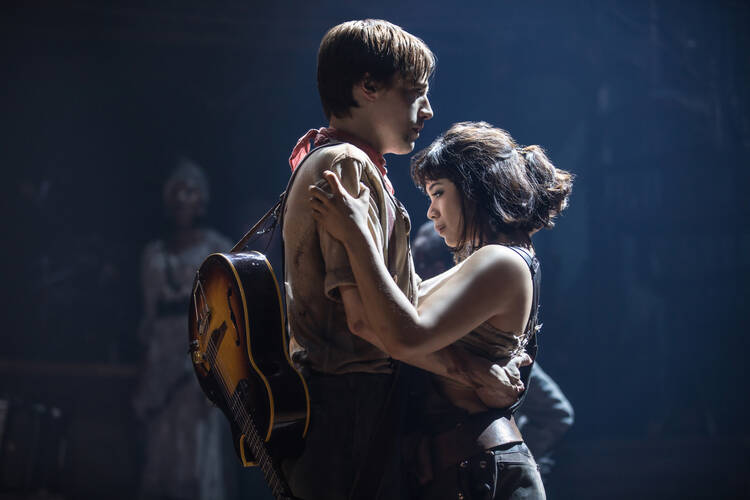 What are musicals for? Pure guilty-pleasure escapism, heart-tugging pathos, social commentary? All or none of the above? It’s a question raised and variously answered by the current season of new musicals on Broadway, which offer a mixed bag of ambition, artistry, savvy and eagerness to please, and in so doing demonstrate both the capacity and limits of the form.

While we live in an age in which new musicals can seemingly be about anything—Founding Fathers, murderous cannibalism, racial integration, a lesbian cartoonist, War and Peace—and can take on all kinds of forms and musical genres, the expense of producing and attending them can still function as an imaginative constraint, a powerful disincentive to artistic risk. This doesn’t just explain the preponderance of brand-name movie adaptations (“Pretty Woman”) and jukebox musicals (“Ain’t Too Proud—The Life and Times of the Temptations”) geared toward choosy consumers. It would also explain why so many of this season’s musicals seem to want to do it all: to pack as many laughs, tears, tunes and life lessons into two-plus hours as humanly possible. It is a lot to ask of one evening’s entertainment, and not every show is up to it.

The one-stop-shop approach can be seen in two of the season’s big film adaptations, “Tootsie”and “Beetlejuice.” In “Tootsie,” the bookwriter Robert Horn and the songwriter David Yazbek have constructed a formidable musical-comedy machine strong enough to power through its weaker, more dubious teaching moments and dated gender politics (though mileage may vary). As in the popular 1982 film starring Dustin Hoffman, the show follows a difficult, unemployable New York actor (Santino Fontana), who stumbles into the role of a lifetime and unleashes endless complications when he creates and impersonates a fictional actress, Dorothy Michaels, to get a job.

We live in an age in which new musicals can seemingly be about anything.

Horn’s book does well by this farcical construct, though it is ultimately stronger on one-liners than on plot logic. And though ostensibly set in the present day and sprinkled with contemporary references, the show’s heart and soul are resolutely retro: When Dorothy proposes that the musical-within-a-musical she’s starring in, a risible “Romeo and Juliet” sequel called “Juliet’s Nurse,” be set in the 1950s, you can sense the relief of the director, Scott Ellis, and songwriter Yazbek, as the shiny tux jackets and A-line dresses roll out. This is what their “Tootsie”wants to be: a brassy, sassy mid-century musical from an era of reassuringly binary gender politics, an age when a man in a dress and heels is funny in itself and transgender people aren’t even a thing. To its credit, “Tootsie” mines gut-busting humor from many more sources than its cross-dressing premise, but for full enjoyment, a pair of (metaphorical) 2-D glasses may help.

“Beetlejuice,” meanwhile, can barely get a laugh to save its undead life, though not for lack of trying. The bookwriters Anthony King and Scott Brown, along with the inaptly named songwriter Eddie Perfect and the tireless director Alex Timbers, have turned Tim Burton’s oddball 1988 horror-comedy film into a sort of naughty theme park ride, equal parts Disney’s Haunted House and frat house. At its center is the actor Alex Brightman, working hard to deliver gravel-voiced wisecracks as the title ghost-ghoul, and Sophia Anne Caruso, as a Goth girl with mommy issues and a series of belty songs about—honestly, I have no idea. While “Beetlejuice” spares no expense or talent in an effort to divert us and some in the audience seem duly satisfied, this is a show that wants to both goof crassly on its ostensible subject, death, and tug heartstrings for its cartoonish characters. Neither mission accomplished.

“The Prom” delivers a message of danceable inclusion worthy of “Hairspray”: “Build a prom for everyone.”

Another new show that spares no effort but with vastly different intent and effect is “Hadestown,” a sumptuous if shallow retelling of the Orpheus and Eurydice myth by the songwriter Anaïs Mitchell, inventively staged by director Rachel Chavkin. Set in a sort of artisanal version of Depression-era New Orleans, with the underworld recast as a kind of steampunk factory floor, the show unfolds as a bluesy folk tale, narrated in verse by a besuited Hermes (Andre De Shields) and accompanied by a crackerjack onstage band that brings out every tactile texture of Mitchell’s tuneful score. Indeed, I connected with this finely crafted show on every level except story and character; it is never especially clear what the show’s doomed, beautiful young lovers see in each other or why they part, let alone reunite, though they sing some lovely songs along the way.

Far more interesting, if no less inscrutable, are the couple that rules the underworld, Hades and Persephone, not least because in Patrick Page and Amber Gray, respectively, we have two of the liveliest Broadway performances in memory. Between his indelible basso profundo croak and gangsterish gravitas and her Eartha Kitt-like rasp and faded-party-girl poignance, this is a couple worthy of their own show. And “Hadestown,” which is ultimately more staged concept album than full-service musical, almost gives it to them.

While “Hadestown” is favored to sweep this year’s Tony Awards—it received the most nominations this week and has inspired a devoted following—one other new little-musical-that-could deserves a second look. Both creakily old-fashioned and up-to-the-minute, both silly and serious, “The Prom”tells the story of a quintet of washed-up Broadway pros who descend on a small Indiana town to shame it into hosting a gay-inclusive prom. One of the show’s core strengths is that it owns all the awkwardness and even ugliness of that premise, as red-state intolerance collides with coastal-liberal narcissism and both are effectively disarmed, not least by the sweet, earnest lesbian teen, Emma (Caitlin Kinnunen), at the show’s soft center.

Though the songs, by Matthew Sklar and Chad Beguelin, tend toward the anonymous and synthetic, Bob Martin and Beguelin’s sneakily smart book and Casey Nicholaw’s snappy direction keep “The Prom” on its toes. If it doesn’t have quite the high-quality jokes or tunes of some its rivals, it does succeed on one level that the competition can’t quite touch: Trump-era relevance.

While “Tootsie”has some incongruous #MeToo call-outs and “Hadestown” has a chilling if pointless song about building a wall (around Hell? Who exactly is struggling to get in?), “The Prom” delivers a message of danceable inclusion worthy of “Hairspray”: “Build a prom for everyone.” No one musical can be all things to all people, but a good musical can speak—or sing or dance—to us all.

I recently made a list of show songs for CD's to be listened to. Almost nothing from the last 20 years made the list. The music/songs from recent shows are not meant to be listened to. It is not that the shows cannot be entertaining. My son recently gave my wife and I tickets to "Come From Away." We loved it but there is hardly a song in it that one would sing in the car or around the house.

Why were these reviews in America Magazine? There is not one faith or values based comment.