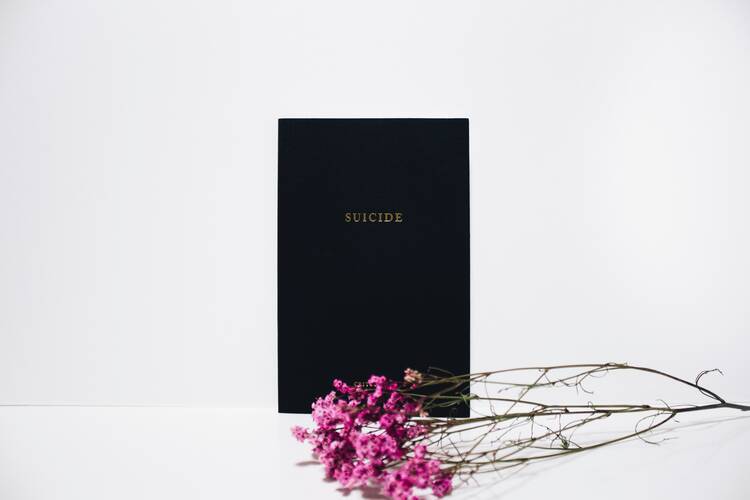 Photo by Thought Catalog on Unsplash

Sigrid Nunez mines the effect of suicide on family, friends and even the pet dog in her National Book Award winner, The Friend. Although the title would seem to refer to the dog pictured on the cover, the storyline is deliberately ambiguous—like almost everything in this book. Several friends are mentioned in the novel, but the three friends significant to the story are an unnamed narrator, her unnamed mentor and a dog.

The multifaceted narrative primarily attempts to process the consequences of a mentor’s suicide through the writing of a lengthy letter that is suffused with “Catholic guilt.” Part of the enterprise is his Great Dane, named Apollo, who, as the narrator describes him, is good, kind, smart, warm, loyal, honest and, like the Greek god, inspirational—everything that most people are not. The dog’s “large hazel eyes are strikingly human,” the narrator writes to her mentor, who committed suicide. “They remind me of yours.” The statement is key to this postmodern novel, where what you see is what you get.

The Friend: A Novelby Sigrid Nunez

This is also a story about teaching students who dislike reading and consider it senseless to study literary classics because they are not bestsellers. The narrator mentions students who take the sex scenes out of their stories in order to workshop their writing, believing they might be expelled in the #MeToo era. She discusses postmodern fiction, qualities of good writing, the perils of publishing quality literature and the difficulties of caring for a grieving dog while suffering from depression.

After her mentor killed himself, his dog sat at the door and continually howled in mourning. His howling irritated the mentor’s third wife (a.k.a. Wife Number Three) and caused her to ask the narrator to adopt him. We later learn that the mentor had told his wife to give Apollo to the narrator if anything happened to him.

The dog brings irony, warmth and thoughts of her mentor to her barren life. No wonder the narrator won’t give him up, even if it means violating the terms of the lease to her Manhattan apartment and possibly being homeless and even though the dog slobbers and tends to have accidents.

Because the mentor did not leave a suicide note, the narrator can only speculate about his reasons, which she does. There are no clues in the last email he sent her; it contained a list of books he thought might help her research. One of their last conversations suggested he was unhappy, since it concerned Cambodian women who nearly cried themselves blind. Perhaps, she thinks, he was depressed because as he aged, he became physically unattractive.

She tells her deceased mentor about her visits to a counselor, where she asks whether people have the right to commit suicide and why people kill themselves. She notes that Christianity prohibits suicide, yet there is nothing in the Bible forbidding it, and (in a far-fetched comment) suggests that Christ himself could have been said to have committed suicide, a comment she found in her research but that, like so much else in the story, she does not explain.

Reminiscing about their past, from the time she took her mentor’s writing courses as a college student, she discusses his marriages, their friendship and his death. To the mix she adds quotations from literature and philosophy. Like the narrator and like Nunez, the mentor, whom we see through the narrator’s eyes, was a novelist as well as a college writing professor. He told his students that whenever something bad happened to a writer, there was always a silver lining: They could write a book. (Perhaps that is the reason the narrator wrote this book.) He advised students to write what they see, not what they know. (Perhaps that is why there is an engaging visual quality to her novel.)

The multifaceted narrative primarily attempts to process the consequences of a mentor’s suicide through the writing of a lengthy letter that is suffused with “Catholic guilt.”

The mentor considered romance between professors and students vital to creative endeavors. Believing that he could not write without inspiration, he had affairs with students. He did have a brief fling with the narrator but considered it finished. The story, though, implies that she still loved him.

Numerous religious references add resonance and irony to the novel. The narrator mentions, for example, that Letters to a Young Poet, by the poet Rainer Maria Rilke, appears on her syllabus. Rilke, like herself and the mentor, she adds, loved dogs. She also reads the book to her dog. She especially enjoys Rilke’s line, “Perhaps everything that frightens us is, in its deepest essence, something helpless that wants our love.” Unfortunately, Rilke’s daughter, who devoted her life to her father’s work, killed herself.

The narrator also notes that a friend of Flannery O’Connor’s committed suicide. The woman had become Catholic through O’Connor’s influence but then left the religion. For “a serious Catholic” like O’Connor, the narrator says, “the devil is not a metaphor.” A variation of this comment could serve as the book’s epigraph: Neither the devil nor God is a metaphor.

Like Nunez’s debut novel, A Feather on the Breath of God, her latest fictionalizes actual events. One of Nunez’s friends did kill himself, as she noted in an interview that also suggested Nunez was affected by the growing number of suicides. (The suicide rate in the United States jumped 33 percent between 1999 and 2017, according to the Centers for Disease Control).

The narrator calls this postmodern type of blended novel auto-fiction, self-fiction and reality-fiction. One of its hallmarks is a memoir-like quality, a plot that zig-zags on the road of real and invented, a tone that is conversational and a discursive style—all found in The Friend.

A Suicide and Other Deaths
Diane Scharper

The book’s penultimate chapter hints there are two dogs. One is the Great Dane. The other is a miniature dachshund named Jip. The second to last chapter also raises the possibility that the mentor is alive and that the suicide attempt failed. That interpretation is contradicted in the final chapter. The contradiction is not resolved, suggesting the narrator, and by extension Nunez, prefers ambiguity over definition and that ambiguity is the key to the success of this type of fiction.

Secretly, the narrator hopes that if she takes care of the dog, her mentor will miraculously return to life, which, the alternate ending suggests, is indeed conceivable. Remembering how Edith Piaf’s blindness was supposedly cured on a pilgrimage to the shrine of St. Thérèse of Lisieux, the narrator thinks everything is possible. And in this complex and compelling novel, it is.

This article also appeared in print, under the headline “Fiction about Nonfiction,” in the Spring Literary Review 2019, issue.

Diane Scharper is a lecturer at the Johns Hopkins University Osher Institute. She is the author or editor of seven books, including Reading Lips and Other Ways to Overcome a Disability, winner of the Helen Keller Memoir Competition.