Review: Michelle Obama in her own words 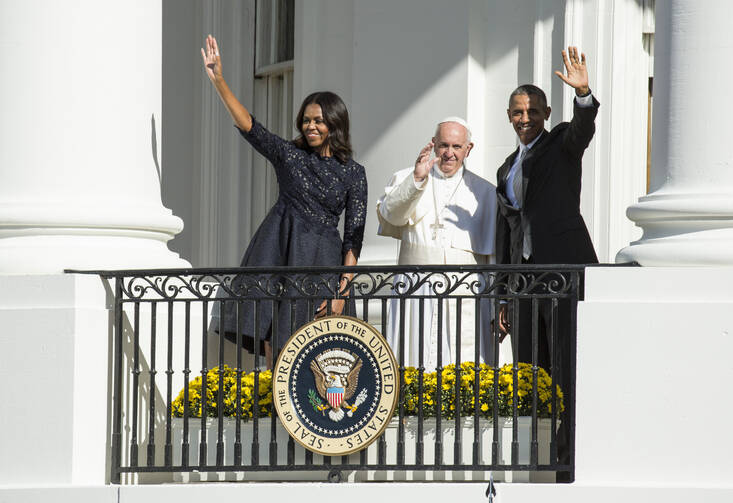 How a nation interprets a First Lady says as much about us as it does about her. In Becoming, Michelle Robinson Obama narrates her own story, as an African American girl growing up on Chicago’s South Side who headed off to Princeton (where she voluntarily took a theology class her first year) and later Harvard Law School. As a successful lawyer and hospital administrator; as a wife and mother who, having moved out of the White House, she takes stock of what has come before.

With Becoming, Obama joins several former First Ladies who have penned reflections on the office of spouse-in-chief. Like Nancy Reagan, Michelle Obama intentionally curated her wardrobe. Like Laura Bush, she found a way to adapt the White House into a place where two daughters could grow up. Like Hillary Clinton, she sought to draw attention to public health issues—even while learning from others’ mistakes. (Clinton “was candid with me,” writes Obama, “about how she’d misjudged the country’s readiness to have a proactive professional woman in the role of First Lady.”)

What distinguishes this book is Obama’s nuanced awareness of how public perception of her is inextricable from ongoing struggles within American understandings of race, professional women and the political process. “When you’re First Lady,” she says,

America shows itself to you in extremes…. Since stepping reluctantly into public life, I’ve been held up as the most powerful woman in the world and taken down as an ‘angry black woman.’ I’ve wanted to ask my detractors which part of that phrase matters to them the most—is it ‘angry’ or ‘black’ or ‘woman’? I’ve smiled for photos with people who call my husband horrible names on national television, but still want a framed keepsake for their mantel.

The book avoids the pitfalls of most memoirs of public life, which can read as nostalgic and plodding chronologies. Hers, by contrast, artfully weaves insights and metaphors throughout the volume, tackling issues that are both personal (like in vitro fertilization and miscarriage) and political (like health insurance, food deserts and gun violence).

Michelle Obama's autobiography avoids the pitfalls of most memoirs of public life, which can read as nostalgic and plodding chronologies.

“Bear with me here,” she writes at one point, “because this doesn’t necessarily get easier. It would be one thing if America were a simple place with a simple story. If I could narrate my part in it only through the lens of what was orderly and sweet.… But that’s not America, and it’s not me, either.”

Mrs. Obama manages to balance serious talk with a sense of humor; she interweaves observations about international political meetings with humanizing anecdotes about commiserations with the Queen of England over the agony of a long day in high heels. We learn that her mother regularly slipped off White House grounds to meet friends for lunch and, when told by strangers that she looked uncannily like Michelle Obama’s mother, would demur: “Yes, I get that a lot.”

Michelle Obama: “The deeper I got into the experience of being First Lady, the more emboldened I felt to speak honestly and directly about what it meant to be marginalized by race and gender.”

The former First Lady’s self-presentation in this book is warm, smart and unafraid to name ongoing challenges to the as-yet-imperfect self-realization of our nation, especially regarding racism and sexism: “The deeper I got into the experience of being First Lady, the more emboldened I felt to speak honestly and directly about what it meant to be marginalized by race and gender.” Reflecting on Donald Trump’s rhetoric and bombast in the 2016 election (specifically the 2005 tape that objectified women at the hands of powerful, rich men), she writes: “Every woman I know recognized it…. Dominance, even the threat of it, is a form of dehumanization. It’s the ugliest form of power.” She adds, accurately: “Women endure lifetimes of these indignities—in the form of catcalls, groping, assault, oppression. These things injure us. They sap our strength. Some of the cuts are so small they’re barely visible. Others are huge and gaping.”

Michelle Obama’s moral compass is oriented around integrity and focused on creating a more equitable world for children, with special attention to girls and young women in the United States and around the world, regardless of color or creed. “We owe it to them to stay strong and keep working to create a more fair and humane world,” she writes. Becoming is a powerful demonstration of what a strong woman can make of a “reluctantly” public life.

This article also appeared in print, under the headline “A first lady takes stock,” in the April 1, 2019, issue.

Christiana Zenner is an Associate Professor of Theology, Science, and Ethics at Fordham University in New York.