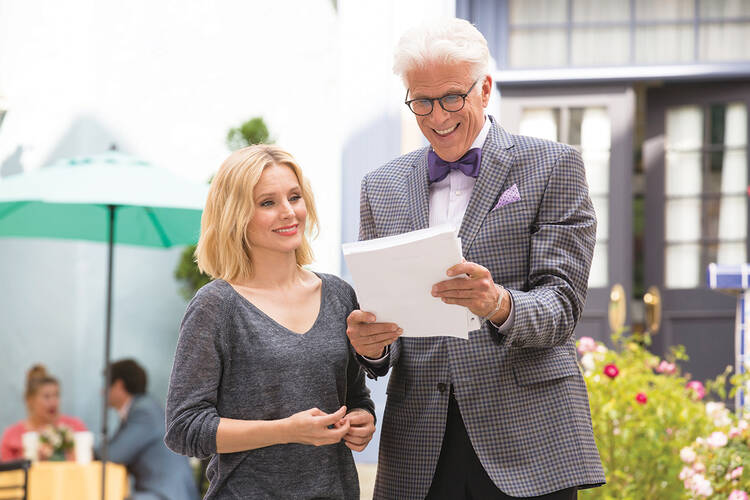 I recently asked Ally, my 9-year-old niece, and Patrick, my 7-year-old nephew, what they thought heaven might be like. Ally had some very specific (and strangely board game–centric) views: “It’s a candy land, and I’ll have a gingerbread house and I’ll have a pet gingerbread dog and I’ll be in a world of fantasy and I’ll be an angel and I can fly everywhere and I can see everyone that I love there.” (God, just to be clear, this is not a request.) Patrick was more concise, but on much the same page: “Jumpy houses. Ice cream. Rainbows. Musicals.”

The afterlife. For as long as we have been around, we have fashioned stories about how you get there, who lives there and what happens when you arrive. Some tales, like Dante’s Divine Comedy, are among our world’s best-known works of literature; others have taken on an accepted wisdom: there is a white light; you are welcomed by all the people you have ever loved; and you all go eat gingerbread cats and sing show tunes in jumpy houses that stay inflated forever.

Onto this overflowing stage of ideas has come an unexpectedly wonderful new addition, NBC’s The Good Place. Starring Kristen Bell (“Veronica Mars,” “Frozen”) and Ted Danson (“Cheers,” “Fargo”), “The Good Place” tells the story of Eleanor Shellstrop (Bell), a recently deceased woman who finds herself rewarded for her full life of good deeds with entrance into the Good Place, an endless land of neighborhoods perfectly crafted to suit their inhabitants, right down to including each person’s soulmate. Built by an earnest novice architect, Michael (Danson), Eleanor’s Good Place includes a multitude of frozen yogurt shops and stores where all the clothes fit. It also includes Janet, a humanesque Siri who pops up upon request to answer questions, and Chidi Anagonye (William Jackson Harper), a Nigerian ethics professor who is Eleanor’s soulmate.

The problem is, Eleanor did not live a full life of good deeds. In fact, she was generally awful. But having been mistakenly allowed into the Good Place, and hearing just how high the bar was to avoid the unseen Bad Place—no artist has ever been invited here; even Florence Nightingale didn’t make the cut—Eleanor desperately wants to avoid being found out. So with the help of Chidi, she tries to learn how to be a better person.

“Bad person learns to be good” is hardly a new story idea. And usually the more the protagonist is converted to the cause of goodness, the worse the series gets. (Remember how much more compelling “NYPD Blue” was when Andy Sipowicz was a furious, inarticulate bigot than after he became the show’s tender grandpa.)

“The Good Place,” though, has some great assets. First, it is created by Michael Schur, who has a history of using the sitcom format to quietly talk about big things. “The Office,” for which he wrote, transformed the brilliant, two-season British series about the painful emptiness of office life into a wacky and big-hearted meditation on the inextinguishable meaningfulness of life, even in the midst of a ridiculous corporate world. “Parks and Recreation,” which Schur co-created, likewise took the concept of a small-town, Indiana, city parks and recreation department and fashioned an idealistic series about progressives and conservatives being friends and working together to serve their community.

“The Good Place” already has a number of fun, interesting ideas at work. For instance, because each Good Place is crafted to fit its inhabitants perfectly, Eleanor’s non-perfectly good presence is causing the place to come apart at the seams. Strange storms erupt, as well as sinkholes and Texas-sized ladybugs.

More intriguingly, for as much as this is supposedly heaven, many of the people within it seem pretty flawed. The philanthropist Tahani Al-Jamil, for instance, makes a constant show of her generosity and seems to be putting on a British accent; her mute, Buddhist monk soulmate, Jianyu Li, shows her no affection.

In some ways it is reminiscent of C. S. Lewis’s idea in “The Great Divorce”: When you get to heaven, the first thing you have to face is being welcomed by someone you would never want to see. (Take a moment for reflection on this; it will haunt you.) But it also raises the question: Is this place all that it seems? Could it be that “The Good Place” is actually a pretty effective “Bad Place”?

The show’s other secret weapon is its cast. Though today Kristen Bell is best known for her sweet performance as Princess Anna in the animated Disney film “Frozen,” her real forte is wacky humor mixed with a deep, dark, heartbroken fury. Sitcom or not, a show about a woman who wasted her life and may end up in hell is going to profit from the broad range of colors that Bell can paint.

Likewise, Ted Danson as the innocent, optimistic Michael delivers yet another fantastic performance. I am not sure anyone would have predicted that 30 years after “Cheers” Danson would have become the greatest male television star of his generation. And yet, in the last 10 years alone he has had critically acclaimed—and remarkably varied—roles: in “Fargo,” “C.S.I.” and its spinoffs, “Bored to Death,” “Curb Your Enthusiasm” and “Damages.” Again, it is hard to say where “Place” is headed, but Danson is clearly capable of anything.

The older I get, the more my ideas about the afterlife tend toward a slightly less clear resolution than the classic “white light, gingerbread family” scenario. No matter when I might die, I find it hard to believe that I will be “done” or that my life will be wrapped up in a bow with some culminating statement or deed. (Based on my history so far, it seems much more likely to end with a burp and a lot of unfinished business.)

I am also not sure it is in the human DNA to ever be done growing or being curious or trying to do better or just wondering. No matter what the specific details might be, I tend to think that in some sense the journey goes on. In the words of the prophet Nancy Sinatra, “These boots are made for walkin’, and that’s just what they’ll do.”

“The Good Place” imagines the landscape of eternity in primary colors and endless fro-yo, but underneath there is quite a road. Anyone who wonders about his or her own place in the big scheme of things will find in it a welcome, thoughtful traveling companion.