Review: The famous Weegee, up close and personal 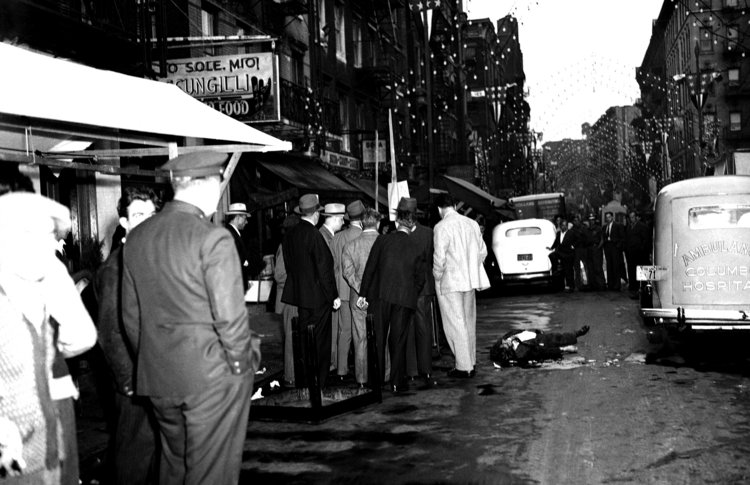 In this classic Weegee photograph, a crowd gathers around the body of a man killed in a melee on Mulberry Street in New York City on Sept. 21, 1939 (AP Images).

One of the great aesthetic and moral markers of film noir is its stark, high-contrast lighting. That noir glare makes every face a beacon lost and drifting in a sea of shadows. The white light confronts the human face and makes the darkness all around it even thicker. It’s a kind of lighting made for crime, for secrets, for the punishingly bright exposure of what’s hidden in darkness; for sudden fear, reversals of fortune, the soul in extremis. And it came, in some small part, from the collision of technology, ethnic anxiety and a hunger for success—from, in other words, Weegee.

The sharp contrast between black and white enhances the whiteness of skin, which is why a man named Arthur Fellig used it when he took his pony Hypo through the neighborhoods of New York’s Lower East Side, letting kids ride Hypo and trying to persuade their struggling parents to shell out for a picture of the kids on the pony. Fellig—as he was still known in the 1910s, though he would soon gain the nickname under which he would become famous—knew that the parents would want their kids to look as WASPy as possible. So he used “the contrastiest paper I could get in order to give the kids nice, white, chalky faces.” And those bleachy family-album pictures kept Weegee in baggy suits and cheap cigars until he could break into the news business, where his stark, high-contrast crime photos earned the kind of fame that ruins people. Ah, the sweet smell of success!

Christopher Bonanos’s Flash: The Making of Weegee the Famous is a book in love with its subject—convinced of his genius, willing to be charmed by his excesses and forgiving of his lapses. “People who have never heard of Weegee can describe him,” Bonanos writes, because he created Hollywood’s idea of the newspaper photographer: “the squat guy in a rumpled suit and crumpled fedora, carrying a press camera with a flashgun mounted on its side, a stinky cigar clamped in the corner of his mouth.” Bonanos can laugh at Weegee’s ego (the guy had a stamp saying CREDIT PHOTO BY WEEGEE THE FAMOUS) but he never forgets the skill, talent and determination behind the persona.

Christopher Bonanos’s Flash: The Making of Weegee the Famous is a book in love with its subject—convinced of his genius, willing to be charmed by his excesses and forgiving of his lapses.

The pony-photos story encapsulates several of the qualities that made Weegee the king of crime photography and one of the godfathers of noir. Weegee knew photographic technology intimately. He could command the camera and push its limits. In the days when each picture required the photographer to load a fresh glass plate into the boxy camera body, Weegee would spend hours practicing his moves until he had the dexterity to shoot faster than his rivals. He knew how to light a shot for emotion as much as—sometimes more than—factual accuracy. And he knew that if you want to make it big, you have to play to your audience. Weegee’s news photos and his later art photos have their strange obsessions—sleeping people, mannequins, spectators, all in their own way hauntingly exposed and helpless—but above all, in his early, hungry years, he gave the people what they wanted.

Weegee’s great insight was that even in news photography, people want emotion—what Bonanos summarizes as “schmaltz, pathos, violence.” They might want irony: firehose blasts turning to steam as they hit the blazing bouillon-cube factory, upon whose brick exterior is a company ad reading SIMPLY ADD BOILING WATER.

They might want horror: Weegee titled one of his best-known shots “I Cried When I Took This Picture.” It shows a woman clutching her mother, who is wearing a shawl, as they stare in open-mouthed anguish at the burning building they’ve just fled, inside which the other daughter and her child are burning to death.

Weegee wasn’t above making some cash by shooting cute pics of puppies in water glasses (who doesn’t love a funny pet photo?), but he was known for his corpses.

They might want subtle emotions too complex to name, as in the gorgeous photo of the accused cop- killer Anthony (Mad Dog) Esposito after a roughing-up at police headquarters: The cops face away from the camera and Esposito looks down, his loose, unsteady posture and the white bandage under his eye the sole deviations from the photo’s straight vertical lines.

If a car knocks a horse-drawn wagon off a bridge, Weegee explained, “The other photographers will take a picture of the bridge…. What I do is go and see what happened to the poor old horse.”

Bonanos details the method: the police radio in Weegee’s quintessentially bachelor apartment; the willingness to goose the truth now and then; the emphasis on spectator and aftermath. Weegee wasn’t above making some cash by shooting cute pics of puppies in water glasses (who doesn’t love a funny pet photo?), but he was known for his corpses. The end of Prohibition was bad for his business too.

The bloodstained photos might be sordid, but Bonanos suggests that Weegee was also a political photographer, a champion of the working class. Weegee’s camera could make any working man or woman mythical. A 1940 photo shows a bagel man emerging from the predawn mist with his loops of dough, like a poppyseed prophet come down from the mountain. His Harlem photos are just as raw and human—and just as artistically accomplished—as his pictures of white people, free of any anthropological distance. (Weegee may have shot the most glamorous N.A.A.C.P. photo ever, as a pretty young woman smokes beside a little sign for the civil rights organization.) His photos of men arrested for dressing as women show a willingness to let them display themselves as they like; similarly, a 1940s photo of “Girls at a Bar,” who from their dress are almost certainly lesbians, is casual and neighborly.

A ministry in art: The Jesuits who bring a religious lens to the arts
Edward W. Schmidt, S.J.

But Weegee himself mistrusted “message” art, a mistrust Bonanos oddly attributes “perhaps…to his lack of formal education, perhaps to his streetwise cynicism.” Any artist interested in the full range of humanity will depict class struggle and the inner life of despised and oppressed people. (Consider “I Cried When I Took This Picture”: The anguished mourners’ landlord pleaded guilty to manslaughter for insufficient fireproofing.) But Weegee’s police-booking photos of suspects are often frankly exploitative. He had a repertoire of lies and tricks by which he could prevent arrestees from hiding their faces. His camera could capture resignation, defiance or bewilderment on an arrestee’s face, but if you consider those websites that collect mug shots cruel, maybe you should be uncomfortable with Weegee’s guilty-until-proven-unprofitable work here too.

Bonanos can’t quite hide the way Weegee the lonely man whose camera expresses the emotion and connection he struggles to share in real life.

Fame bought Weegee freedom. He used it to leave crime far behind. Instead, he explored the possibilities of the camera, inventing a score of ways to warp images in his “distortion” photos. These pictures show technical innovation, but artistically they do not rise above the level of the carnival caricaturist. Weegee also loved girlie photos. Some of them he turned into art: the backstage shot of a Los Angeles strip-club dancer, sparkling with gold-glitter body paint, drinking a cup of water with all the poise of a femme fatale leveling a pistol, as a man in the background ducks behind his hat in shame; the self-mocking shot of Bettie Page sassily facing a row of men hidden behind their panting cameras. But Bonanos can’t quite hide the way Weegee exemplified not only the crime-photographer image but that other, sadder image of the photographer: the lonely man whose camera expresses the emotion and connection he struggles to share in real life. Bonanos captures the sadness of a man who chased women, literally (his bohemian friend Judith Malina refused to go to his apartment after her first visit turned into what she called “a running-around-the-table situation”), who sometimes seemed to see all women as centerfolds.

Weegee the Famous no longer needed to woo—he was free to dazzle. But like many lonely men, he learned that his obsessions were not widely shared. He was interested in nudism and made a couple of movies about it that met with zero success. His “distortions” didn’t do much better. He tried to get back in the crime-photo game in the mid-’60s, but it had passed him by; he couldn’t hack the late hours and the constant hustle. Bonanos struggles to prevent readers from concluding that Weegee peaked early and never regained the glory of the murder years, but the photos tell the story. Weegee was best when he was hungry.

This article also appeared in print, under the headline “In the Best Possible Light,” in the Fall Literary Review 2018, issue.