Review: The church does diplomacy 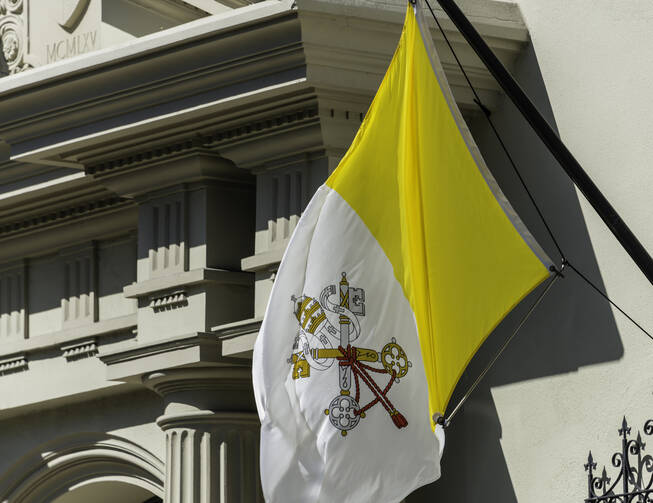 In the early 1970s, Catholic social action intellectuals engaged in an in-house fray over how to speak of official Catholic thought on social questions. One group favored the newer term “teaching,” a legitimate translation of the Latin doctrina, because it suggested a developing tradition and hinted at a new, leading edge. The second group favored “doctrine,” linking the corpus of social thought to the eternal verities of Catholic dogma. In choosing “social doctrine” as one pole of the argument in a book that makes a major contribution to the understanding of the church as a significant actor in international affairs, A. Alexander Stummvoll has planted his feet in the camp that stresses the unchanging nature of Catholic truth. Catholic Social Doctrine, on his reading, is “a living tradition” not because of the evolution of Catholic thought or learning that comes through pastoral practice but because in real-world politics its implementation requires compromise.

A Living Traditionby A. Alexander Stummvoll

Had the author studied as much theology as international relations theory, he would have understood that while some Catholic social teaching has remained constant, much of it has changed. This is because of the strong stress on historical consciousness during the Second Vatican Council, with the notion of “reading the signs of the times” and with Blessed Pope Paul VI’s assignment of that duty to subcommunities within the church, making social teaching one element in Christian social praxis. Even though they inclined to a classicist epistemology of eternal truths, both Saint John Paul II and Pope Emeritus Benedict XIV expounded and elaborated their social teaching within the historicist framework of the signs of the times.

Catholicism is deserving of special study in diplomatic realms not only because of its transnational organization, but also because of its intricately developed body of social thought.

Catholicism is deserving of special study in diplomatic realms not only because of the size of the Catholic Church, its transnational organization and the Holy See’s status as a sovereign diplomatic actor, but also because of its intricately developed body of social thought. A Living Tradition examines the extensive interplay between the Catholic Social tradition and Vatican diplomacy. Stummvoll notes that Vatican diplomacy is “prudent and pragmatic” and disposed to make compromises, even as it has put its imprint on international affairs, because of its commitment to the international order. The teachings of the church on social issues, in Stummvoll’s view, provide less of a map for the church’s diplomacy than a set of compass bearings that give it direction.

All the same, A Living Traditionis a much-needed book. Since Sept. 11, 2001, the place of religion in international affairs has been widely debated, with most of the ink spilt on discussions of Islam. Studies of Catholic social teaching, of Vatican diplomacy, and of Catholic social movements can all be readily found on their own, but no work has brought them together quite as well as Stummvoll’s. The importance of this volume is particularly notable at this moment in international diplomacy because, in Douglas Johnston’s phrase, religion has been “the missing dimension in statecraft.” The author’s treatment of the Holy See as an international actor makes a constructive contribution to contemporary International Relations theory.

Stummvoll’s treatment of the Holy See as an international actor makes a constructive contribution to contemporary International Relations theory.

An added value of this book can be found in its extensive case studies of the Vietnam War, the fall of communism in Poland, U.N. conferences on population and women, and campaigns for Jubilee-year debt relief.

The lack of a broader theology and social scientific study of the church weakens the study in other ways. Approaching the Holy See as a complex organization, for example, where other offices influence policy formation and different personalities shape diplomatic efforts would have further strengthened an already muscular study. Efforts by Vatican diplomats to normalize relations with China, for example, have been complicated by pressures from the Congregation for Evangelization, which for decades was staffed by Eastern Europeans hostile to communism in any form. The establishment of the Synod of Bishops, though it never received the authority the council had projected for it, nonetheless has provided input and set priorities on issues raised by residential bishops and national bishops’ conferences. This is especially the case with regional synods for Lebanon, Africa, Asia, America (North and South) and the Middle East.

Particularly strong bishops had notable influence on Vatican policy. The late Cardinal Bernard Law and others projected a negative image of the Clinton administration to the Vatican, which did not match the administration’s desire for positive relations with the Vatican and its readiness for compromise on population policy. In a news conference two weeks before the Cairo conference on population, President Clinton dismissed the population-control policies favored by Under-Secretary of State Tim Wirth and Assistant Secretary for Population and Refugees Phyllis Oakley, telling reporters, “That may be the State Department’s policy. It’s not mine.” Clinton then sent Vice President Al Gore to head the U.S. delegation with instructions to work with the Vatican. A few months later, the tough-minded Bishop Jim McHugh, a member of the Holy See delegation and a hawk on pro-life issues, told me excitedly, “Al Gore is a friend. Tim Wirth is not, but Al Gore is a friend.”

With respect to the campaign for Third-World debt relief, Honduras’s Oscar Rodriguez Maradiaga was a pivotal figure. President of CELAM, the council of Latin American episcopal conferences, Cardinal Rodriguez was the instigator of meetings between the World Bank and International Monetary Fund with CELAM and the United States Catholic Conference under the auspices of the Pontifical Council for Justice and Peace. He deserves much of the credit for the success of Pope John Paul’s campaign for debt relief as part of the Great Jubilee of 2000.

The role of bishops’ conferences as collaborators with the Vatican on international initiatives is another aspect of the church as a complex organization in need of study. Under the leadership of the late, much lamented Cardinal Jean-Louis Tauran, when he was Secretary for Relations with States or foreign minister, the Holy See began working closely with national and regional bishops’ conferences and facilitating their collaboration with one another. (Before Tauran’s time the Vatican had discouraged such cross conference collaboration.) During the Debt Relief discussions, the U.S. conference became the principal interlocutor with the international financial institutions as well as the U.S. government. For several years, the USCCB’s economic policy advisor devoted most of her time to the debt issue. She laid the foundation for Jubilee 2000’s expansion from the U.K. to the U.S. and staffed their operation for its first months. During the Synod for America, at the request of Cardinal William Keeler, she provided an advisory memo on the thornier points under discussion and later prepared documentation for the Post-Synodal Commission as it drafted the pope’s apostolic exhortation “Ecclesia in America.”

In the same campaign, the complex nature of both the church and the International Financial Institutions set limits to the campaign beyond the more obvious political and ideological ones. During the Synod for America (1997), both the synod office and bishop moderators presented obstacles to full discussion of debt relief and examination of the hard issues connected with it. Likewise, despite the full commitment of World Bank President James Wolfensohn, bank officials declined to provide the information and assessments they had been instructed to provide for the USCC and CELAM to craft more focused recommendations on policy.

Ironically, Deputy Treasury Secretary Larry Summers, a critic of debt relief, became the White House point man for the Senate vote to approve $300 million in debt relief. During the November 1999 semi-annual bishops’ meeting, Summers relayed through then-Archbishop Theodore McCarrick the names of senators whose votes were needed for the success of the administration’s proposal. Like a whip in Congress, McCarrick, in turn, would take the state’s archbishop to the phone to receive Summers’ call. It was a performance to remember.

The Jubilee campaign was also a lesson in leadership and elite coordination. Pope John Paul, Cardinal Rodriguez, President Clinton, Mr. Wolfensohn and M. Michel Camdessus, the Managing Director of the International Monetary Fund, as well as Treasury Secretary Robert Rubin, Mr. Summer’s boss: all invested themselves in the cause and made decisions that advanced the process. The church through the Pontifical Council for Justice and Peace played a special role, one that perhaps no other body could, as convenor of these world actors, who relished coming together to do a singular good. It was one of those times when the potential for coherence between the Liberal World Order and Catholic Social Teaching was best demonstrated.

The impact on foreign policy of the church’s complex organization, the complicating roles of personalities and bureaucrats in policy development and institutions, the impact of leaders for good or ill and the benefits of coordination among leaders are all topics for future study. In the meantime, Mr. Stummvoll has established a standard of scholarship for future students of the Church’s diplomacy and social teaching. A Living Traditionis a book I will make required reading for my students in the years ahead.

This article also appeared in print, under the headline “Prudent and pragmatic,” in the September 3, 2018, issue.