Far from Paradise: a soldier’s story of the Iraq war 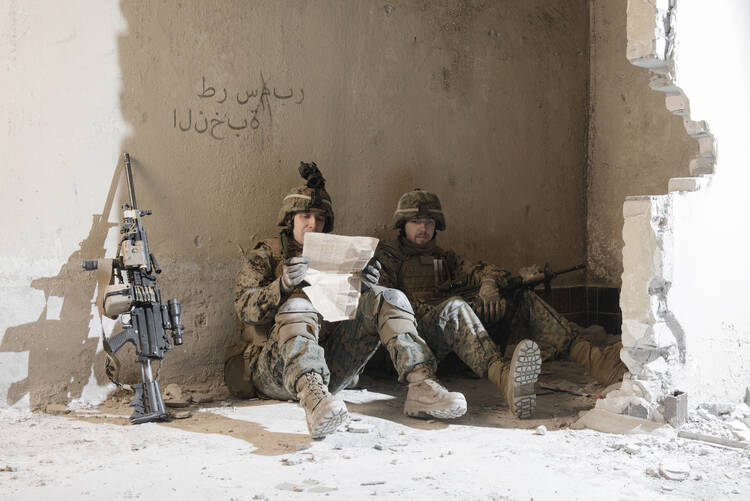 Eat the Apple is a catchy title, but what does it mean? According to a Jesuit colleague of mine who is a former U.S. Marine, to “eat the apple” means to take advantage of a situation. I thought perhaps it was a reference to Genesis and our ancestors’ exile from the Garden of Eden, the scene of the first sin. After all, the book takes place in Iraq, where ancient maps place Eden. More recent scholarship credits several war novels, where the tone is set by “Eat the apple, f— the Corps!” The saying, which goes back to 1973, comes from a Marine who is angry and fed up with the Marine Corps.

Although my father was in the infantry in World War I, growing up during World War II my brother and I dreamed of becoming Marines. I can still sing “The Marines’ Hymn” and play it on the piano, though ROTC took me into the Army Artillery for two years in Germany. For this reason I found myself drawn to Matt Young’s Eat the Apple, the true story of a young recruit who takes on three deployments in Iraq over five years.

His structure is unusual, consisting of very short three to five page chapters, each presented in a different format: in the voice of a narrator describing another recruit, who represents Young himself; a dialogue between Young and a drill instructor; a dialogue between a boy and girl about marriage, ending with the boy saying, “I love you”; instructions on “how to ruin a life.” Young poisons his prose with constant uses of “f—,” often four or five per page, more than I have ever seen in a book, including war novels.

In the long run, Eat the Apple narrates Matt Young’s journey into himself.

An odd chapter concerns a camp outside Fallujah popular with the ruling class, where kidnapped young girls were raped, murdered and thrown off the dock into the water where they would be devoured by giant black eels.

Because the war is mostly over by the time Young is deployed, his battle experiences are limited. Within three months of his arrival, however, a suicide bomber strikes a group of Humvees and a neighboring house near Amariya in Iraq. No one is killed except the bomber, but fourteen Marines are injured. Young recalls that Marines on the roof were taking cover from indirect fire. “We see ourselves, exploded bits smoking on the sand-turned-glass, impaled and shredded by window shards, crushed by falling rock. ‘What are the odds?’....We know we are going to die here too. Because of anger, retribution, oil, lies....We can hear the voices of the dead beckoning us. Who wants to take a bet on tomorrow?”

For Young, tomorrow’s enemy is a “sightless monster made up of sand flies with the mouth of a camel spider…. the husk house is a terrarium of horror; we are being eaten alive. Our feet and hands split and puss and crust, and sleep does not come. Time is all around us now, its passage unmarkable.”

From time to time Young enters the mind of a fellow Marine, a corporal who wishes he had been grievously wounded, just to break the routine. He worries that years from now he will still regret that he saw no fire fights, no ambushes. He still will not have killed another human being, only dogs. Will his fiancée be having sex with someone else? He will remember Blackwater Bridge, and recall the photograph of contractors burned and hung like meat on display from the green girders of the bridge.

From time to time in Eat the Apple, Matt Young enters the mind of a fellow Marine.

In the long run, this book narrates Young’s journey into himself. That he too has not killed anyone disturbs him, and he too falls into a subculture among the troops that cancels or overwhelms the virtue that would support his love for his fiancée waiting for him at home.

My own memory sends me back to Officers’ Basic Training at Fort Bliss, Tex., a prelude to my two years stationed in Germany before joining the Jesuits, when I was fed up with the behavior of my fellow lieutenants in Juarez, across the Mexican border. My father cautioned me against making judgments about my peers, because we would depend on one another in battle.

The casualties of war
Raymond A. Schroth, S.J.

Young steadily stumbles into self-knowledge. He smokes and drinks too much; with the help of porn and street women he indulges in sex in many varieties. Toward the end he phones his own fiancée and calls off their wedding. In a final dialogue with his past, he has a nightmare where he is court-martialed for not doing enough to rescue a gunner when their truck was hit by a culvert bomb. He and his “Past-me” discuss the Iraq War and agree it was wrong. He asks his past self the definition of a hero. Answer: “Someone who acts selflessly in the face of adversity.”

Today, Matt Young teaches writing in Olympia, Wash. I hope he will not hesitate to tell his students that America’s wars can be wrong. It takes courage to say it, and to say it in clean speech.

This article also appeared in print, under the headline “Far from Paradise,” in the June 25, 2018, issue.

Raymond A. Schroth, S.J., emeritus editor of America, has taught writing for 40 years.