The most dangerous philosopher in the West? 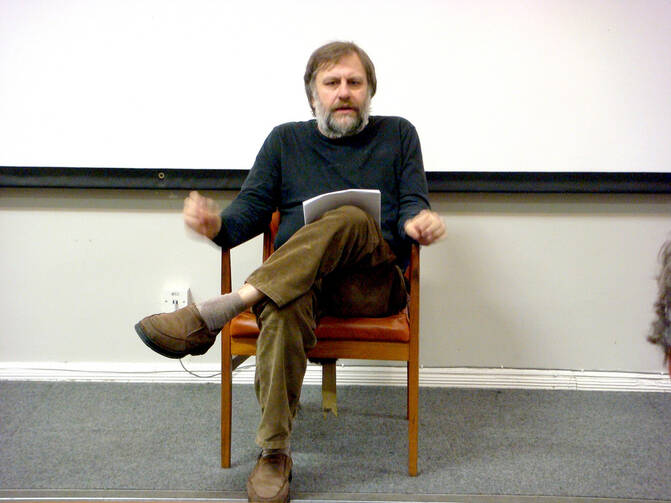 Slavoj Zizek starts The Courage of Hopelessness with the premise that in today’s globalized world, capitalism determines “all conditions of life.” This “introduces a radical class division across the entire globe” that separates “those protected by the sphere from those outside its cover.” In other words, he sees the inner world of capitalism as a sort of “cupola,” where only a wealthy minority gets to profit. “The latest Paris terrorist attacks, as well as the flow of refugees,” Zizek writes, “are momentary reminders of the violent world outside our cupola, a world which, for us insiders, appears mostly on TV reports about distant violent countries.”

The Courage of Hopelessnessby Slavoj Žižek

The author of over 40 books and the subject of numerous films, the 69-year-old Slovenian philosopher has been referred to as “the Elvis of cultural theory” for his use of philosophy to analyze popular culture. Though his books range from studies on Hegel to film theory and even theology, Zizek most often focuses on the way ideology functions in political discourses and in popular culture.

He has also been referred to as “the most dangerous philosopher in the West,” thanks in large part to provocative statements like “Gandhi was more violent than Hitler.” Zizek, of course, does not mean exactly what he says there. Rather, “Gandhi’s movement effectively endeavored to interrupt the basic functioning of the British colonial state.” The violence he refers to is that which challenges the overall political structure of a society. Statements like these also offer a glimpse into Zizek’s style: He attacks political liberals for being complicit in the way things are, while he is also opposed to right-wing politics.

Zizek attained celebrity status in the English-speaking academic world with the publication of The Sublime Object of Ideology (1989). When this book was published, ideology tended to be understood as an all-encompassing political narrative. The failures of communist regimes seemed to inaugurate a world where people would be free from such projects. Yet at that time, Zizek argued that ideology would persist, though less as a matter of belief and more as the way people simply continued to act. Irony and cynicism, he argued, would became the dominant ideologies, enabling people to engage in a consumerist lifestyle while claiming to be fully aware of the problems it represents. Though people might claim not to commit to any specific system of ideas, their behavior would show otherwise.

In The Courage of Hopelessness, Zizek challenges the reader to act without relying on the false certainties of ready-made discourses. Global capitalism, he notes, is increasingly losing its link to Western democracy. Nondemocratic regimes like China’s have proven that they can function within the world of global capitalism. This economic system is capable of adapting to various political systems, and in so doing it puts at stake what Zizek refers to as “the commons.” This includes issues like ecology, immigration, access to information and health care. As common spaces of living and communication become more and more privatized, the question of who gets to have access to them creates more worldwide tensions. Increases in migration and reactions against it, like calls to “build that wall,” are some examples of these tensions.

In the face of this hopeless situation, Zizek argues that we should avoid the temptation of identity politics. Since capitalism excels at appropriating all kinds of cultures and identities for consumerist gains, politicizing particular non-Western cultures and identities will not prevent its negative expansion. Though identity politics may mobilize many on the left, for Zizek this happens in full conformity with the way neoliberalism capitalizes on different cultures. Since capitalism cashes in on a certain free market of identities, identity politics does not, then, offer any serious challenge to the current state of affairs.

To develop these points, Zizek analyzes the Syriza movement in Greece, Boko Haram in Nigeria and the Trump-Clinton election in the United States. For him, Donald Trump is the “symptom” of Hillary Clinton’s politics, which focused on issues of cultural and sexual identity. She succeeded in uniting “Wall Street and Occupy Wall Street,” and in this sense her message to her liberal supporters was: “we can concede all your cultural demands...without endangering the global market economy.” These improvements in cultural and identity recognition are positive achievements in Zizek’s view, but he says they betray a fear that many political liberals have of actual change. Identity politics becomes a way of promising generalized change while allowing the neoliberal economic system to remain the same.

Zizek also argues that the excessive fear of Trump among liberals hinders real engagement with him and his ideas. Political satires on television play on these feelings of shock and indignation to instill a false sense of solidarity. In short, they make Trump’s opponents feel smart and good about themselves. But this goes without committing to any collective action that goes beyond the demands for more recognition.

For Zizek, Trump is in a certain sense not all that dangerous. People like Ted Cruz are much more dangerous and extreme in their positions, because they are more fanatical in their ideology. Compared with them, Trump appears much more to be a cynic and an opportunist. Zizek sees Trump as “an attempt to keep together the two heterogeneous components of the Republican Party—big business and populism.”

For Zizek, Trump and Clinton are “both worse.” He argues that the political left cannot limit itself to fighting Trump. Rather, it should continue to align itself with people like Sen. Bernie Sanders, who dared to question the economic policies of Hillary Clinton. If all the left has to offer is a critique of Trump without a critique of Clinton, then Trump is just the beginning of more politicians like him to come.

Zizek also explores how multiculturalist liberalism is facing a crisis of conflicting values that it itself cannot resolve. Fundamentalist and terrorist groups make this deadlock more explicit when they see themselves as rebelling against the Western imposition of customs. Groups in the United States and Western Europe arguing against Western colonialism tend to be in favor of women’s rights. Yet groups like Boko Haram frame their opposition to women’s rights in anti-colonialist terms. For Zizek, “anti-colonialist critiques of the West more and more appear as a rejection of Western ‘sexual’ confusion, and as a demand for a return to the traditional sexual hierarchy.”

Slavoj Zizek: “One tends to denounce Western cultural values at the very moment that, critically reinterpreted, many of them can serve as a weapon against capitalist globalization.”

Should progressives, then, embrace the Enlightenment values of education and liberation from prejudices, at the risk of seeming Eurocentric? For Zizek, this type of questioning makes liberals feel conflicted about how open they can be. Again, they face a conflict of values for which they do not seem to have the answer. What Zizek rejects is the sort of attitude that ends up “silently tolerating ‘customs’ that humiliate women and gays, on behalf of the ‘greater’ anti-imperialist struggle.”

This book suffers from some of the common failings of Zizek’s other writings. He covers a wide variety of issues but does not always succeed in connecting them. Readers may also find it frustrating that Zizek has very little to offer in terms of concrete proposals. Yet he suggests that we first ask the right questions about our current situation and reject temptations to rash activism. He also suggests that we not shy away from looking at Western cultural values in new and different ways. “[O]ne tends to denounce Western cultural values at the very moment that, critically reinterpreted, many of them can serve as a weapon against capitalist globalization.”

Writ large, this book is an extended argument that a hopeless situation can be a fertile ground for acts of courage, provided one dares to think outside of the usual right-wing/left-wing labels.

This article also appeared in print, under the headline “"The Most Dangerous Philosopher in the West",” in the April 16, 2018, issue.