Contemporary philosophy has a problem: theology 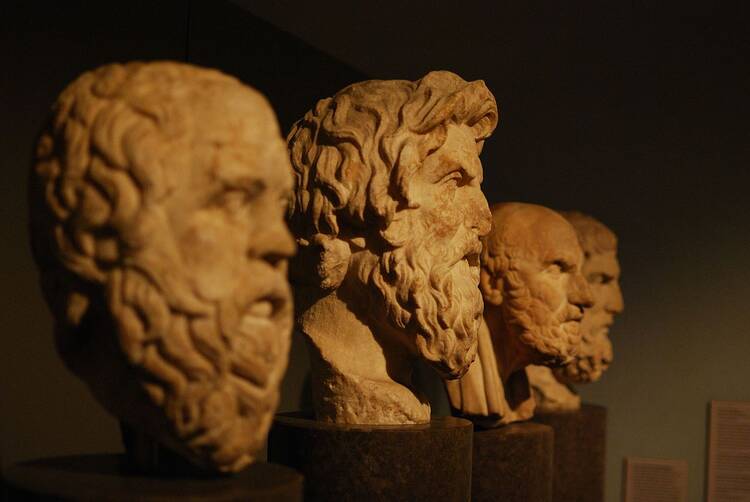 Contemporary philosophy has a problem. No one outside the philosophical tribe seems to be listening.

The most abstract of the humanities, philosophy grows ever more marginal in academe. As core curricula are eviscerated in favor of STEM instruction, philosophers often find themselves confined to teaching applied ethics—when they find themselves teaching at all. The raising of philosophy’s perennial questions and the study of its classical texts have become a luxury reserved for a few elite colleges. The discipline’s hyper-specialization has not helped it find a broader public. A recent philosophy conference I attended featured such tantalizing topics as “Causal Models and the Ambiguity of Counterfactuals.”

The American Philosophical Association has launched a Committee on Public Philosophy, which anxiously offers five annual prizes for the best op-ed pieces written by a philosopher. But the op-eds will do little to revitalize a profession that has largely abandoned the central questions of existence (God, knowledge, freedom) in favor of arcane terminological disputes.

A similar crisis has shaken the philosophical estate within the church. Before 1970 philosophy enjoyed an enviable prominence in the curriculum of Catholic colleges. This Neo-Scholastic philosophy was certainly structured around the perennial questions—Does God exist? What is virtue?—but it was an odd, manual Thomism in which students never actually read Aquinas. A smug catechetical certitude seemed to lurk behind the paint-by-numbers proofs and the gleeful one-paragraph refutations of modern “adversaries.”

That world has disappeared; its chastened replacement in the Catholic academy bears the stamp of marginality: minimal curricular presence, hyper-specialization, incoherence among the squabbling philosophical factions.

This cultural recession of philosophy has encouraged some Catholics to abandon philosophy as a central component of the church’s discourse. The issue has become especially neuralgic in the dispute over the formation of clergy. But the project of a nonphilosophical Catholicism is fraught with peril.

Without a substantial philosophical formation, the teaching of the church on faith and morals becomes incomprehensible. It is difficult to understand, let alone teach, basic Christian doctrines, like the Trinity and the Incarnation, without a metaphysical grasp of person and nature. Informed by natural-law reflection, ecclesiastical moral teaching becomes a cipher without serious investment in moral philosophy. The principle of double effect, crucial in the church’s medical and military ethics, did not tumble out of a biblical page.

Pope Emeritus Benedict repeatedly reminded his listeners that the church’s Hellenic philosophical impetus cannot be sliced off from an illusory pristine Gospel. The Bible’s wisdom books, Johannine Gospel and Pauline epistles already present the Gospel in concepts drawn from classical Greek philosophy. Augustine’s Platonism and Aquinas’s Aristotelianism model the synthetic passage through both Athens and Jerusalem that each Christian generation must undertake. For all their ecclesiastical contributions, the social sciences simply cannot engage the properly philosophical questions of the nature of truth or the destiny of the human soul. The universalist tenor of philosophical discourse also permits the church to find common ground with more secular social-justice agents impervious to faith-based appeals to Scripture or tradition.

The Lutheran theologian Paul Tillich once argued that the church needed to correlate philosophy with theology in its proclamation of the Gospel. In his vision, philosophy articulated the most universal questions regarding human existence, indeed existence itself. The peculiar power of philosophy lies in the logical rigor and conceptual precision with which it pursues this task.

The distinctive task of the theologian is to show how God’s word responds to these philosophical questions. It is hard to see how a church liberated from philosophical interrogation can avoid wandering into ecclesiastical positivism or the shifting dunes of relativism.

Show Comments (
5
)
Comments are automatically closed two weeks after an article's initial publication. See our comments policy for more.
William Rydberg
5 years 10 months ago
Reading Fr. Conley s.j. is a highlight for me in every Edition his work appears. I think that the Church would benefit if Society of Jesus sat down with Catholic Answers (I think specifically Jimmy Akin) for they are doing the same Work in my opinion. in Christ,
James Hynes
5 years 10 months ago
I am not at all up-to-date with contemporary Catholic Philosophy, but I have seen something which seems (to me at least) to be new, exciting and fruitful, and that is the mimetic theory of Rene Girard, and its interpretation by such scholars as Michael Kirwan, S.J, and James Alison. Perhaps Girard's most influential book is "Violence and the Sacred" in which he looks precisely at examples of "sacred violence" such as the examples you gave in your article http://www.americamagazine.org/issue/racine-and-sacral-violence. Girard notes that this sacred violence is found in all ancient literature, often in a disguised form, but only in the Bible, in Judaism and Christianity, is it named for what it is and overcome. So the three writers I have mentioned do "show how God's word responds to these philosophical questions". You can see more at http://jamesalison.co.uk/ or http://girardianlectionary.net/.
John Walton
5 years 10 months ago
One of the peculiar things about undergrad "philosophy" education in Jesuit Colleges -- the Philosophy majors seem to do pretty well when they take a couple of bio courses and apply to med school, or, absent any scientific sensibility, head off to law school.
Francis Miniter
5 years 9 months ago
While I admit that a lecture entitled “Causal Models and the Ambiguity of Counterfactuals” would probably have me looking for alternatives, it should be noted that David Hume spent a considerable portion of his Treatise on Human Nature attacking the concept of causation, first demonstrating that it would necessarily imply an infinite regression of causes, and second, demonstrating that it is likely a figment of human imagination that seeks order in the world. So, this is one of the great issues of philosophy, even if the narrow corner of the issue raised in that lecture title is disappointing.
Henry George
5 years 9 months ago
Memory may be failing me, but it seems that Jesuit Colleges used to require: Six substantial Philosophy courses and Four substantial Theology courses. Why they still don't makes me wonder.