Malcolm X gets a Shakespearean treatment in a new play 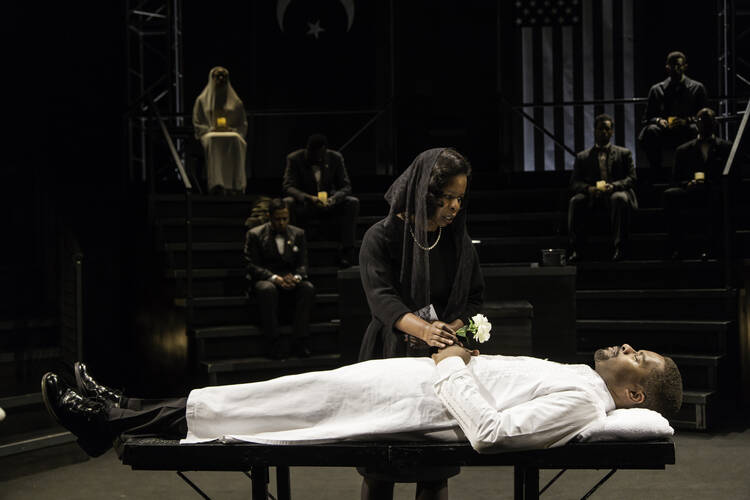 Do we Americans have plays worthy of our rich, complicated history, the way the English, for instance, have not only Shakespeare’s history plays but the work of such latter-day “state of the nation” scribes as David Edgar and David Hare? While the state of our nation is unmistakably a throughline in the American dramatic canon, from Eugene O’Neill to August Wilson, we don’t have, for instance, a great tragedy about the Civil War and Reconstruction to rival the Bard’s Henriad and “War of the Roses” plays or a juicy revenge drama à la “Richard III” about, say, Richard Nixon or Huey Long.

Obviously, a juggernaut like “Hamilton” has changed the game, seemingly in one fell swoop. But there are other signs that today’s theater artists are self-consciously aiming for the Shakespearean history model: Oregon Shakespeare Festival’s ambitious commissioning program, American Revolutions, has given us Robert Schenkkan’s sweeping if somewhat leaden plays about L.B.J. (“All the Way,” “The Great Society”), as well as Universes’ “Party People” (about the Black Panthers and the Young Lords) and Lisa Loomer’s “Roe,” among others.

Do we Americans have plays worthy of our rich, complicated history?

One of the more successful efforts in this budding genre is Marcus Gardley’s “X: Or, Betty Shabazz v. the Nation,” now in an Off-Broadway run through Feb. 18. The play toured the country last year with the Acting Company, in repertory with a staging of “Julius Caesar,” and the influence of Shakespeare’s Roman tragedy can be felt on many levels in this retelling of the last years of the iconic African-American activist Malcolm X. In Gardley’s deft hands, Malcolm (Jimonn Cole) is both something of a Brutus—an idealist who turns on his mentor, the Honorable Elijah Muhammad, when he learns that the Nation of Islam leader has impregnated several young women—and a kind of Caesar, assassinated by conspirators, whose deed will forever stain them while effectively martyring him.

The play’s central voice and conscience, though, is Malcolm’s widow, Betty (Roslyn Ruff), whose quest to convict her husband’s killers drives the action. Ostensibly we are in a sort of spectral courtroom, overseen by a formidable magistrate clad in black hijab and abaya (Harriet D. Foy), in which witnesses are called and legal protocol is fitfully invoked but where speeches, arguments and flashbacks freely overtake the stage. We see glimpses of Betty and Malcolm’s early courtship, as well as various scenes of conspiracy and skulduggery: F.B.I. agents coercing a member of Malcolm’s inner circle into informing on him, Nation of Islam leaders angling against Malcolm. Gardley even imagines a secret meeting between Malcolm and his purported civil rights era rival, Martin Luther King Jr., hinting at an alternative history that seems more tantalizing than ever.

The flow among music, speech, documentary and drama is expertly handled by the 10-member cast and director Ian Belknap. At its best, the play comes off like a sort of spoken-word oratorio. While the portrait of Malcolm himself is at times disappointingly wooden—it is understandably hard to humanize an icon, and Gardley and Cole haven’t quite cracked the code of this guarded, determined man—many other characters spring to vivid life, including Joshua David Robinson’s shambolic, sneakily sharp, ultimately anguished informant, Eugene Roberts; Ruff’s firmly rooted but finely shaded Betty; and J. D. Mollison’s Louis Farrakhan, whose fierce jollity poorly masks a rage at being underestimated.

The characterization of Farrakhan’s grudge hints at one of Gardley’s most impressive achievements. He manages both to honor the verdict of history—that the Nation of Islam, angered by Malcolm’s betrayal and conversion to Sunni Islam after a trip to Mecca, was clearly involved in his 1965 assassination—and give it context and contingency. On a personal level, Gardley shows how Malcolm’s apostasy bitterly stung and divided his former colleagues. And he gives fair consideration to the notion that the U.S. government, whose complicity in Malcolm’s death has neither been conclusively proven or discounted (N.Y.P.D. files on the case still haven’t been opened), felt more threatened by a moderate Malcolm than by the formerly militant one.

If it is hard to humanize an icon, it is even tougher to fill a play with sermons, speeches and testimonies and still maintain nuance, suspense, surprise. Gardley is up to the task, not just technically but thematically, for he is after something bigger than the answer to who killed Malcolm. Or put another way, that answer is necessarily larger than a mere list of conspirators.

In much the same way all Americans are complicit in the continual killings of young black men by officers we empower with deadly force and effective impunity, Malcolm’s killers weren’t just a few hired guns. Gardley’s title gestures to the larger truth: In a narrow, literal sense “the Nation” that Betty Shabazz accuses is the Nation of Islam. But the real enemy of black people’s advancement in America, then as now, remains America itself. Our moral destiny demands a different ending, and we do well to look to dramatists as much as politicians to write it.