Are faith and science contradictory? Or complementary? 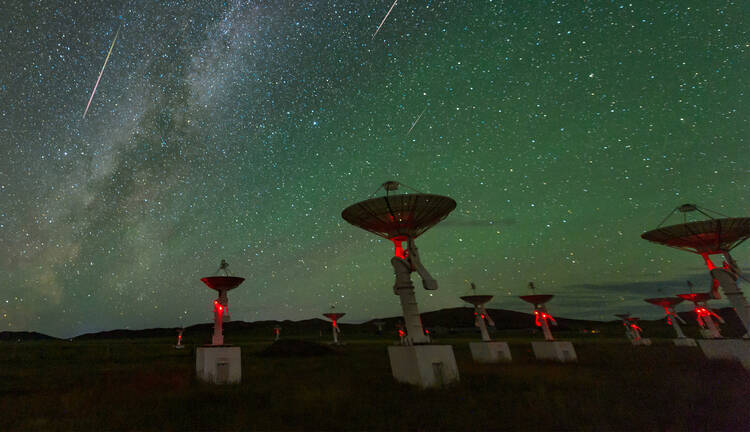 Introducing oneself as a professor of theology and science frequently elicits looks of consternation, a laugh or a rejoinder: “Aren’t they totally opposite ways of understanding reality?” It is more accurate to say that science and religion are capacious terms, so any respectable description of their mutual relationship depends on specifying which religion, what kind of science, in what historical periods and regions.

Three books published in 2017 chart some of the contours of science-religion dynamics. The most general is On Faith and Science, by the historian Edward J. Larson and the philosopher Michael Ruse, a descriptive tour de force of revolutions in epistemology and the historical figures that have shaped many contemporary sciences in post-Enlightenment England and post-Darwinian United States.

On Faith and Science is a tour de force of revolutions in epistemology and the historical figures that have shaped many contemporary sciences.

The first several chapters are organized by scientific discipline—astronomy, physics, neuroscience, geology, biology—which then give way to treatments of topical issues, like Darwinism and belief, sex and gender, eugenics and ecology. Ruse, a longtime philosopher of biology who has little patience for the simplistic and oppositional science-religion binaries promulgated by the new atheists, is well known among scholars for his interpretations of Darwinian thought. Readers will benefit especially from the synopses in “Darwinism and Belief” and “the Evolution of Humanity,” both of which are eminently accessible.

On Faith and Scienceby Edward J. Larson and Michael Ruse

The Image of the Unseen Godby Thomas E. Hosinski

Elsewhere, the tone of On Faith and Science is uneven, partly because of challenges arising from dual authorship but also because it attempts to cover huge topics in a compressed space. Still, the attempts at synthesis are important, and the volume does a fair job of historical and philosophical characterization, while also engaging important topics like sex and gender and ecological degradation (with a sustained engagement with Pope Francis and “Laudato Si’”). As with many treatments of science and religion, “faith” in this book tends to be synonymous with Christianity, occasionally augmented by comments about the jurisprudential monotheisms of Judaism and Islam, with the rarer nod to non-Western traditions, primarily Buddhism.

Religions figure somewhat differently in John Haught’s The New Cosmic Story: Inside Our Awakening Universe, a critical-constructive account that boldly postulates that any sufficient account of “our awareness of an unfinished universe requires not only a new understanding of religion but also a new way of understanding religion’s relation to science.” Whereas science describes external reality, religion for Haught is an essential “inside voice” and a subjective, narrative reality manifesting an ever-developing cosmos. Perhaps most dramatically, Haught claims that “it is through our own subjectivity—mental, moral, aesthetic and religious—that the universe now carries on its long anticipatory adventure toward fuller being.”

Any sufficient account of “our awareness of an unfinished universe requires not only a new understanding of religion but also a new way of understanding religion’s relation to science,” says John Haught.

Scholars of religion may be puzzled at the degree to which Haught relies on the psychiatrist and philosopher Karl Jaspers, or the sensibilities of religion that he understands to be more or less universal and upon which he neatly structures each chapter of the volume. Is it truly possible to speak of “traditional religion’s intuition of indestructible being, meaning, truth, goodness, and beauty” and to call these “rightness”?

Haught offers a useful typology of “ways of reading” the natural world: archaeonomically, which regards the world as the product of physical determinism (the purview of the new atheists and other staunch materialists); analogically, which views the world as an imperfect manifestation or corruption of distant and ultimate truths (the preference of many otherworldly inclined Christians); and his preferred category, anticipatory, which is “aware that the cosmic story is far from over [and] looks patiently and expectantly ahead for a possible meaning to it all...it reads the cosmic story both scientifically and religiously, from outside and inside simultaneously.”

Mocking religion is not a requirement for scientific literacy
Adam D. Hincks

The Church and the Scientific Community
Nicholas D. Sawicki

Like Larson and Ruse, Haught has little patience for the new atheists; and he, too, writes as one who has been immersed in these debates for many years and knows how to communicate to his audience (rarefied though that audience may be). Haught’s constructive account contains elements inspired by Pierre Teilhard de Chardin, S.J., and Alfred North Whitehead, and it also bears some family resemblance to the cosmic integrationist thought of Thomas Berry and Brian Swimme.

A Whiteheadian interpretation of an anticipatory universe is also part of the theological proposal in Thomas Hosinski’s The Image of the Unseen God: Catholicity, Science, and Our Evolving Understanding of God, which is the most explicitly Christian of the books reviewed here. Hosinski writes: “It may seem strange to begin a book on how our understanding of God has developed because of contemporary science with a discussion of God in the teachings and life of Jesus.” But, he argues, this is vital because science is not the benchmark for the Christian notion of God; Jesus Christ is. Nonetheless, “if we are to speak of our faith to our contemporary world, we need to think in terms compatible with what we know of the world through empirical science.”

Any account of divine action, Thomas Hosinski writes, “ought to be able to offer some persuasive reason for why science fails to find any acts of God in its examination of the universe and its processes.”

Any account of divine action, Hosinski writes, “ought to be able to offer some persuasive reason for why science fails to find any acts of God in its examination of the universe and its processes.” For Hosinski, “there are no acts of God that are not also acts of agents of the universe.... God’s action is therefore completely hidden within the ordinary structures and processes of the universe.” Of course, he is not the first to postulate such claims, but the admirable clarity and organization of his writing make this a very readable and useful tome.

Indeed, if paired together, Haught and Hosinski would make for interesting comparison and discussion. Both are informed by recent scientific developments and are drawn to consider how reconceptualizations of God may be necessary. But where Haught is willing to opine on religion as a general category, Hosinski keeps his analysis centrally within Catholic theology. And while it is surely a strength of Catholicism that scientific epistemologies are incorporated into Catholic teachings, it is not entirely clear that the proposals that these authors put forward would be recognizable in historical creedal formulations. (An integrationist attempt extensively argued in a more Thomistic than Whiteheadian formulation is Elizabeth Johnson’s Ask the Beasts, which is structured along the affirmations of the Nicene Creed.)

In my view, many persistent inner tensions among Western Christianities have to do with what kind of God can be seen to perdure or even be salvageable from the epistemologies that the Enlightenment and scientific revolutions have wrought. It is not merely that the scientific method relies on more-or-less objective and repeatable, external experiments and data-gathering, while religious faith speaks to the inner, subjective experience, which is by default impossible to universalize. It is a concern about the viabilities of cleaving to particularized notions of ultimacy. What certainties can science or theology be reasonably said to provide? What does that mean for the assumptions and narratives that we hold dear?

Many persistent inner tensions among Western Christianities have to do with what kind of God can be seen to perdure or even be salvageable from the epistemologies that the Enlightenment and scientific revolutions have wrought.

Perhaps the enduring question is not, then, about whether science and religion are ultimately compatible but about how the authoritative figures and scholars, the scientists and the faithful, strive to articulate what it means to be human and to understand the world around us. To my mind, the question of purpose—especially teleology, or final causes—looms as the largest philosophical variable, as our scientific epistemologies ever-better narrate natural processes that decisively shape patterns of life and perception but that may or may not imply final ends.

It is admirable and refreshing that these books ably demonstrate complementary approaches to religion and science with a minimum of vitriol and a standard of appreciable rigor. That such discourses could also surely benefit from sustained attention to non-Christian and nondominant epistemologies remains a perpetual truism.

This article also appeared in print, under the headline “Are faith and science contradictory? Or complementary?,” in the January 22, 2018, issue.

Christiana Zenner is an associate professor of theology, science and ethics at Fordham University and the author of Just Water (Orbis Books, 2014).