The Church and the Scientific Community

The Church and the Scientific Community 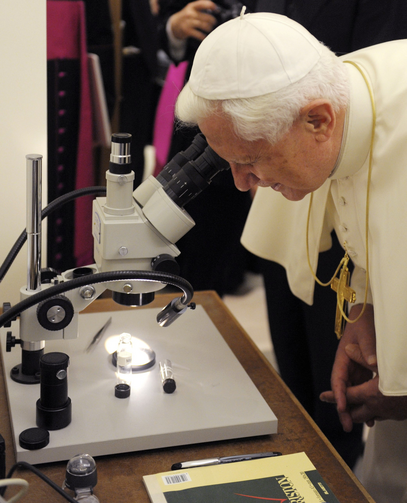 In a recent news story shared here at America, it was reported that George Cardinal Pell, Vatican Secretary for the Economy, offered a critique of Pope Francis’ recent encyclical, “Laudato Si’.” In an interview with the Financial Times on July 16, Pell stated support for the "many, many interesting parts,” in the encyclical, referring to certain sections as “beautiful.” However, Pell noted, “the church has no particular expertise in science…. the church has got no mandate from the Lord to pronounce on scientific matters. We believe in the autonomy of science.”

The cardinal’s stance appears to overlook the historical emphasis placed by the church in its dialogue with the scientific community, not to mention the many Catholics who have produced significant contributions to the sciences over the last millennia. A review of this history may be in order to dispel the mistaken perception that the church and scientific communities cannot collaborate effectively.

Historically, one need not look much further than the last two centuries to see how the church has refined its position towards science. Of course, the are a number of dark stains on the church’s record, e.g., the condemnation of Galileo, the burning of Giordano Bruno, etc., and, for that, the church will always be repentant. However, the church has been a source of great scientific advancement and over the last centuries the dialogue has become increasingly amicable. For example, in the "Syllabus Errorum" issued by Pius IX, it recognized the fallacy that “The decrees of the Apostolic See and of the Roman Congregations impede the true progress of science” (12). Similarly, Pius XII defined the relationship between the church and science in his 1951 address “The Proofs for the Existence of God in the Light of Modern Natural Science,” as “contrary to affirmations advanced in the past, true science discovers God in an ever-increasing degree – as though God were waiting behind every door opened by science” (2). More recently, St. John Paul II’s 1979 encyclical "Redemptor Hominis" outlines much of the modern relationship shared between science and the Catholic Church. JPII writes:

The development of technology and the development of contemporary civilization, which is marked by the ascendancy of technology, demand a proportional development of morals and ethics… Does this progress, which has man for its author and promoter, make human life on earth "more human" in every aspect of that life? Does it make it more "worthy of man"? There can be no doubt that in various aspects it does. But the question keeps coming back with regard to what is most essential -whether in the context of this progress man, as man, is becoming truly better, that is to say more mature spiritually, more aware of the dignity of his humanity, more responsible, more open to others, especially the neediest and the weakest, and readier to give and to aid all (15).

The church has also made its own contributions to the scientific community. Albertus Magnus was a 13th-century Dominican friar who is credited with work in the fields of physics, logic, metaphysics, biology and psychology; Roger Bacon, a Franciscan friar, contributed immensely to the foundations of modern optics and mathematics; 15th-century astronomer Nicolaus Copernicus, a Polish Canon at the Cathedral of Frombork, established the heliocentric model of our solar system. More recently, Msgr. Georges Lemaitre first formulated the Big Bang Theory; Augustinian monk Gregor Mendel is the father of genetics; and Jesuit Roberto Busa's work on the lemmatization of Aquinas’ works contributed to the invention of super computer. Sr. Kenneth Keller was the first woman to earn a doctorate in computer science; Maria Gaetana Agnesi was a leader in developing 18th-century integral and differential calculus, and Louis Pasteur, an ardent Catholic, is the father of bacteriology. There is a not a field in the natural, physical, social or theoretical sciences where the church is not present.

In seeking to track the latest discoveries of scientific advancement, and to advance a clear and decisive moral response in conjunction with the scientific community, the church continues to fund and maintain a number of Pontifical academies meant to promote the sciences as well as the humanities. The Pontifical Academy of Sciences was established as the third successor to the Accademia dei Lincei (Academy of Lynxes, which was founded in 1603 and still exists as a separate entity today), by Pope Pius XI in 1936. Over the last century, members have included Sir Alexander Fleming, the discoverer of penicillin; Ernest Rutherford, the discoverer of the nucleus; physicists Niels Bohr, Max Planck, Werner Heisenberg, Erwin Schrodinger and Stephen Hawking, amongst others; Guglielmo Marconi, the inventor of the long-distance radio; American embryologist Beatrice Mintz; molecular biologist Maxine Singer, and Israeli Crystallographer Ada E. Yonath, along with a significant cohort of equally accomplished scientists.

As many around the world launched attacks on the scientifically driven claims made in “Laudato Si’,” both Dr. Margaret Archer, the President of the Pontifically Academy of Sciences, and Bishop Marcelo Sanchez Sorondo, Chancellor of the Academy of Sciences and of Social Sciences, published severe critiques of those who were opposing Francis’ use of scientific data to drive the teachings presented in the encyclical. To argue that the church, which seeks to pursue truth, cannot engage with scientific advancement, is to be unaware of history. Whether it was Pierre Teilhard de Chardin, S.J., excavating the Peking man in the 1920s, or Antoine Lavoisier, who laid the foundations of modern chemistry, the church and the Catholic faithful have a duty to support and pursue scientific efforts to better understand all of Creation. Science will continue to act as an key to a better understanding of ourselves, and the church must continue to be a part of that discourse.

Nicholas D. Sawicki, a former intern at America, is going into his senior year at Fordham University.

Show Comments (
1
)
Comments are automatically closed two weeks after an article's initial publication. See our comments policy for more.
Tom Fields
4 years ago
Again, a B- on your essay. Of course the Church has a role in science---look at the Vatican Observatory! However, the Church has also erred big time----with Galileo, DeJardin and more. When the Pope---with no scientific background or expert footnotes---wades into "man-made global warming" ---he is in "polit ical" territory---and he aligns with many liberals who espouse anti-Catholic views on important issues like abortion and homosexuality. Feed the poor, help those in need---do not align with the Far left!
Advertisement