The forest was his cathedral: three new books deepen our understanding of Thoreau 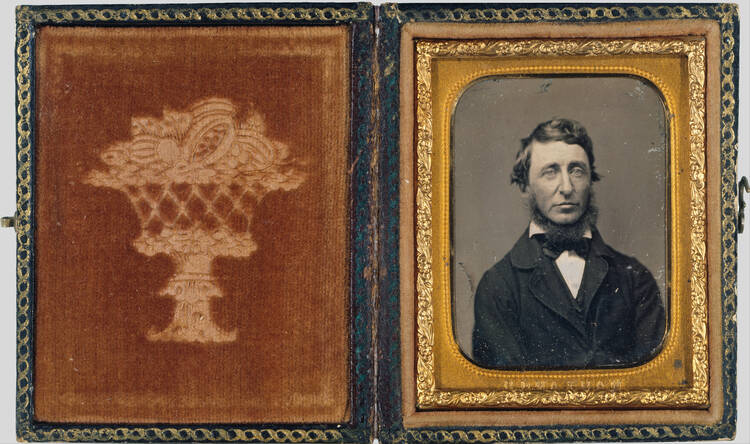 A refreshing change of course for Henry David Thoreau scholars and fans can be explorations of the author and his work from new and different angles. Three recent books on Thoreau, prompted by the the 200th anniversary of his birth, deepen our understanding of him: one through the rigorous method of a scientist; another through the poetic vision of a journalist-photographer enamored of trees; and a third through a biography wherein one meets a Thoreau whose humanism and radicalism are harmonized into a whole vision.

Thoreau and the Language of Trees by Richard Higgins

The author of The Boatman: Henry David Thoreau’s River Years, Robert M. Thorson, has an unexpected résumé for a Thoreau scholar. He is a professor of geology at the University of Connecticut. Thorson contends that alongside the famous Walden, Thoreau’s Journal is his other masterwork, his “unheralded river book.”

The Boatman asks you, the reader, to turn around to see the wetter side of Thoreau country: The three blue highways of navigable water flanked by open bays, lush meadows, and rocky cliffs. A riparian ecosystem where the muskrat, rather than the woodchuck, is the celebrity rodent. A habitat where the otter, rather than the fox, is the most elusive predator. A willowy bank where Thoreau kept boats to sail inland seas, row rippled waters, and pole over submerged meadows where blooming flowers could be seen beneath clear water.

Thorson can obviously write lyrically when he wants to, but much of the book describes Thoreau’s studies in scientifically precise language. Thoreau played and skated on (once 60 miles in a day!), and swam in, the Assabet, Sudbury and Concord Rivers, but he also surveyed them, measured their depths, studied their currents, hydraulics, bridges and sediments. Thoreau was as much a scientist as a poet, ahead of his time in the study of hydraulics.

"The Boatman asks you, the reader, to turn around to see the wetter side of Thoreau country."

Thoreau undertook much of this research to help Concord River Valley farmers bolster their legal case that the downriver Billerica dam was flooding meadowlands on which they grew hay. The farmers eventually lost their case because companies that profited from the dam had key politicians delay the initial favorable ruling, then called for a bogus second study. The Civil War broke out soon after, and industrial interests overruled those of farmers everywhere.

This episode contributed to Thoreau’s realization that humankind and nature were not separate entities. He reframed “his idea of wilderness” to include humans and their complex interactions with nature, including his own surveying work. In other words, Thorson writes, Thoreau would not have approved of Bill McKibben’s view that humans have killed nature.

Thorson tends to overstate the significance of references to rivers, in fact and figurative language, in Thoreau’s Journal, and it begins to sound as a one-note song. In Thoreau and the Language of Trees, Richard Higgins, former reporter and editor for The Boston Globe, has the same problem. His poetic essays move one more deeply than Thorson’s scientific precision but sometimes shimmer like a mirage. Higgins devotes one chapter, “A Soul For Trees,” to Thoreau’s personal religion, noting that Thoreau hated organized religion, “especially his own Calvinist tradition.” But, says Higgins,

"Thoreau was, in fact, religious to the bone. A palpable sense of the holy suffuses much of his writing."

Despite these views, Thoreau was, in fact, religious to the bone. A palpable sense of the holy suffuses much of his writing about nature. He rejected the meetinghouse not because it stood for religion, but because it did not, as he saw it. It killed a true religious impulse.... Formal religion with its creeds was peripheral to the truer, “purer” religion he sought in nature. If Thoreau did not explain this purer form, it was because the experience of it was all he cared about. Trees often led him to it. They were his “shrines” and “burning bushes.” The forest was his cathedral.

This is true, but Thoreau’s religion was also heavily indebted to Hindu works like The Bhagavad-Gita and The Laws of Menu. Buddhism also fascinated him. To use Joseph Campbell’s terminology, Thorson says Thoreau’s bliss was in rivers. Higgins says it was in trees. Both acknowledge the other Thoreau, but each leaves one with the impression that his is the true Thoreau.

The solution to this quandary is to be found in Laura Dassow Walls’s Henry David Thoreau: A Life, in which Thoreau the whole man is depicted in both scholarly and vivid fashion.

Walls, professor of English at the University of Notre Dame, refrains from calling Thoreau a puritanical crybaby, as some recent critics have gleefully done. Yes, he could preach too much and judge others; yes, he did have more of a social life than one might glean from reading Walden; yes, he sometimes loved rivers and trees more than human beings (who doesn’t?); and yes, he did cry when his mother, something of a pistol, suggested he leave home and seek his fortune. Let’s get over it and relearn what he was trying to tell us about life and death, about nature, about freedom and slavery.

It surprised me to learn how Thoreau’s father, John (really Jean) found success as a pencil manufacturer, and how crucial his son was to this success. Henry discovered a way of grinding graphite to a fineness that improved their pencils and secured them a large market. He also did well as a public lecturer and writer. He quipped about having sold a thousand copies of his first book, seven hundred of them in his attic; but he helped support his family with lecturing, writing and surveying. He was also an earthy man who used the same four-letter word for dung that everyone else used and was known to have capered about at parties.

“Resistance” means not just self-defense, defense of one’s fellow citizens, or even of one’s own nation, but defense of all those lives entangled with our own.

I knew already that Thoreau had spent a night in jail, had admired John Brown and sheltered runaway slaves, but not that he sometimes despaired in his love of nature because he lived in a nation that allowed slavery and compelled the return of runaway slaves, and that he willingly participated in a gathering where the Constitution was burned. He was quite a radical, though one who always withdrew at some point to woods or water. He was also, despite some initial prejudices, a champion of the rights of Native Americans, particularly the Penobscot Nation that he came to know in Maine.

The best-known work written at Walden Pond, apart from the famous Walden, is the essay “Resistance to Civil Government,” which became known as “Civil Disobedience.” Walls comments:

It's time to reclaim Thoreau from motivational memes
Ryan Harper

Seeking the Spirit in a secular age
Patrick Gilger, S.J.
“Resistance” means not just self-defense, defense of one’s fellow citizens, or even of one’s own nation, but defense of all those lives entangled with our own: slaves, upon whose labor even “free” Massachusetts depended economically; Mexicans, the declared enemies of the State; and Indians, the declared enemies of civilization itself. But Thoreau was not finished even here. Life at Walden Pond helped him understand how deeply humans are related to nonhumans as well, whether animals used for labor or food, trees used for lumber, wild fishes destroyed by dams, or whole ecosystems, forests and river meadows…. Extending one’s ethical community to the nonhuman world was, in 1849, novel, shocking, ridiculous. But Thoreau would give the rest of his life to this revolutionary insight. What he worked out in writing “Resistance to Civil Government” became not only the foundation of his political philosophy but also the gateway to his environmental ethics.

It is remarkable that someone who accomplished so much died at the age of 44. Walls says in her introduction that at one point she wanted to write two volumes of this biography. I wish she had been able to.

This article also appeared in print, under the headline “The Forest Was His Cathedral,” in the Fall Literary Review 2017, issue.

Frank Freeman, a frequent contributor to America, lives in Maine.