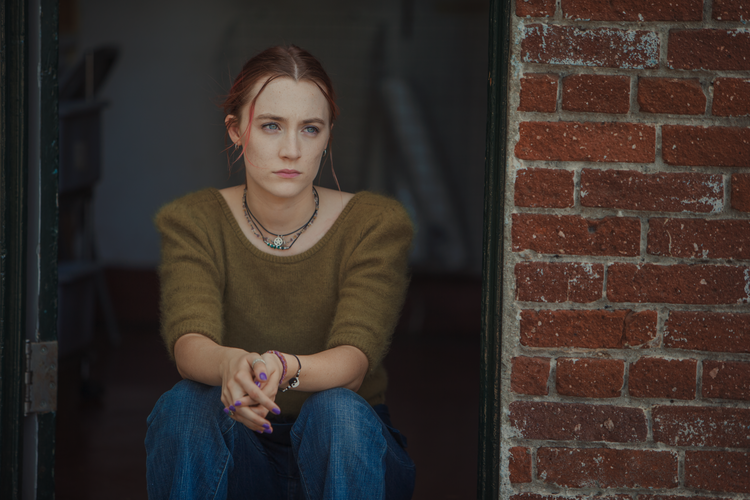 Saoirse Ronan as Lady Bird (Photo by Merie Wallace, courtesy of A24)

Not all the surprises in “Lady Bird” are quite at the level of a title character tossing herself from a moving vehicle, but “Lady Bird” is a very moving vehicle (ba-dum-bum), thanks in part to Ronan and Metcalf, who are remarkable actresses and create one of the more convincing, soulful and subtly constructed mother-daughter relationships in memory. Their execution is sublime, and so is that of their driver: actress-cum-writer-cum-director Greta Gerwig, who exhibits such confidence, playfulness and sensitivity in her first feature that it is almost a shame.

Not all the surprises in “Lady Bird” are quite at the level of a title character tossing herself from a moving vehicle.

Why a shame? Because as the movie-awards season descends upon us, it seems a fait accompli that Gerwig, who also wrote “Lady Bird,” will sweep up all those “first-time-director/first-feature” honors—and they will feel like consolation prizes since Gerwig’s work can stand with any made this year. (The Oscars, on the other hand, trying to rid themselves of the sulfurous aroma of Harvey Weinstein, will no doubt make 2018 the year of the female. Gerwig could be that female—if “Wonder Woman” does not lasso everything in sight.)

At any rate, plaques and statuettes are not what the movies are supposed to be about. What are they supposed to be about? Car crashes and spaceships, of course. Occasionally, however, they also offer a glimpse into the human heart and experience in a way for which motion pictures are uniquely designed. And Gerwig proves herself precociously adept at doing just that.

In telling the semi-autobiographical story of Lady Bird’s coming-of-age out of a Catholic girlhood circa 2002 and her fractured friendships and misguided romances, Gerwig certainly shows she is a writer. She co-authored her own star vehicle, “Frances Ha,” in 2012 with her longtime boyfriend and director Noah Baumbach, and the dialogue in “Lady Bird” is consistently and honestly funny and cliché-free. But Gerwig also has a natural and very cinematic talent for accessing our emotions. She tells a linear story but is unafraid to compress and digress and wander off the over-trod paths of visual storytelling. Her asides are eloquent. Her eye is sharp. Lady Bird, especially as portrayed by Ronan, with her magenta hair and acne, is an original; Gerwig, appropriately, takes chances.

Lady Bird’s Catholic education is just part of her life and character, which has been informed by genuine values.

So does Lady Bird. The product of parochial-school education in Sacramento, Calif., she is socially reckless, masquerading as richer and hipper than she is and more glamorous than she can really pull off. But her problems are predominantly self-made; the source of her woe is not the school she attends or the teachers she has. The canny Sister Sarah-Joan (Lois Smith), for instance, is not only a rare thing among on-screen nuns but among movie adults in general: someone who can remember and sympathize with being a 17-year-old girl. Gerwig’s recollections of her own Catholic school days skip the emotional scarification and/or atmosphere of oppression that always seem to adorn these kinds of parochial-school memory movies (“Heaven Help Us” and the like). Lady Bird’s education is just part of her life and character, which has been informed by genuine values.

It is, after all, her innate sense of decency and morality that chafe against the libertine behavior she identifies as cool—she is a teenager, lest we forget—thus providing much of the low-key drama underlining her story. Her parents, for all their fretting, are exemplars of charity and understanding. They have not only adopted Miguel (Jason Rodrigues) but taken in his girlfriend Shelly (Marielle Scott), too, and all are treated as a brother and sister to Lady Bird by Marion and her husband, Larry (the great Tracy Letts). They have no small number of problems themselves but keep the faith, in every sense.

In “Memories of a Catholic Girlhood,” which, like “Lady Bird,” was a pioneering work of fact-based fiction, Mary McCarthy wrote, “Looking back, I see that it was religion that saved me.” The key is “looking back.” Lady Bird cannot know during “Lady Bird” or even by the end of the film’s freshman-year coda just how important it all was to her, how much was imparted to her without her having known it. Or how it made her who she was. We think about this at the end of “Lady Bird” because it is that kind of movie, one that is dissatisfying in the best possible way: We are dying to know what happens, well past the point where house lights come back on.

John: great review. I want to run and see this film. Can't wait. Cinema has "saved my life" over the years. ALL cinema: indies, silly movies, great drama- even some blockbusters. In a fractured world, I cherish entering my CATHEDRAL ( my movie house!), buying a large coffee and chocolate chip cookie and watchng a wonderful movie. Dorothy Day used to quote Dostoyevsky:"Art( Beauty) will save the world." Indeed.
Thank you America! Thank you John!