Bringing Thomas Merton’s wisdom to children with an ABC book 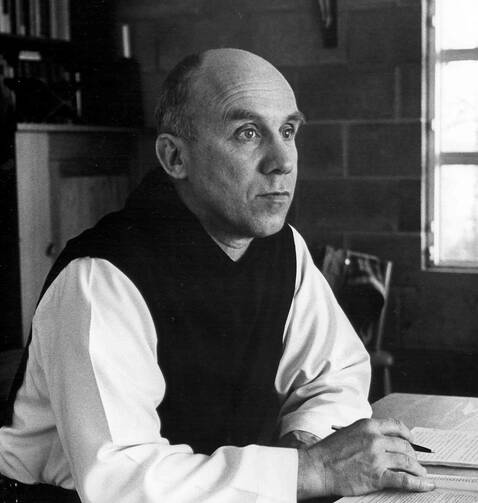 Over the nine years we’ve lived in Louisville, my sons have grown familiar with the Abbey of Gethsemani and its monks. We go out there frequently to pray and hike with a few of the monks I’ve befriended. Since he was little, my 9-year-old has greeted one of them with the Cistercian sign language for “crazy brother,” and more than once my “Star Wars” loving 12-year-old has told them that they remind him of the Jedi.

The ABCs of Thomas Mertonby Gregory and Elizabeth Ryan

Through these visits, my children have also become familiar with Thomas Merton. Some of the monks they have come to know were novices under Merton, and they’ve had the opportunity to visit Merton’s hermitage on occasion to see his writing desk, the fireplace he lit to stay warm as well as the small chapel where he said Mass. On our last visit to the hermitage, we wandered into Merton’s bedroom and looked into the closet. When we spotted a small fan stored on the floor, my 9-year-old’s eyes grew wide. “Dad,” he asked, “is that the fan?”

Truth be told, even if we did not live near the Abbey of Gethsemani, my sons would have been exposed to Merton, given the love I have for him.

I first read Thomas Merton when I was in the midst of a vocational crisis, lost in questions about what I was to do with my life. Merton came to my aid. For whatever reason, I had a copy of The Seven Storey Mountain on my shelf, and I decided to read it, even though I knew almost nothing about the author.

The book transfixed me. As I read it now, its faults appear glaring, as they eventually did to Merton, but at the time Merton’s account of his own crisis of vocation and its eventual resolution comforted me. I started reading Merton voraciously and became so enthralled with him that, in a display of youthful exuberance, I received a tattoo of a drawing of a monk by Merton on my left shoulder. When my wife and I had children, each of them, in turn, came to call the tattoo “Tom.” They really had no choice but to get to know this monk.

But while exploring Merton’s hermitage and hiking the woods of Gethsemani with habited monks seem as normal to my sons as tossing a baseball, the truth is that their experience of Merton has been mediated almost entirely through my own experience of him. I was awakened by Merton, not them.

From Alpha to Omega

I was therefore excited to learn of a children’s book about Merton that could deepen their understanding of why their old man was so taken with him. The ABCs of Thomas Merton: A Monk at the Heart of the World aims to introduce children to the basics of Merton’s life and writings by associating various aspects of these with the alphabet.

I was not sure that this format would be an effective means of articulating the meaning and purpose of Merton’s life, but I am impressed by what the authors included in their Mertonian alphabet. Children learn biographical details that range from a description of his parents and his place of birth to his eventual seclusion in a hermitage. Perhaps more important, children learn about prominent themes in Merton’s writing, with a particular focus on his writings about nonviolence and war, the environment and his oft-neglected essays on racial conflict. They also learn about the emphasis he placed on interreligious dialogue.

The book delves into Merton’s spirituality, shaped as it was by his identity as a Catholic monk in a contemplative order. Children are reminded that Merton lived by The Rule of St. Benedict for 27 years and that the Eucharist was central to his understanding of himself as a priest and his understanding of the church. The book describes Merton’s own life of prayer, from the seven times a day he spent chanting the psalms with his brother monks to the way he prayed while wandering the woods to his silent meditation.

While I initially wondered whether Merton would be better served by a children’s book that followed the contours of his life chronologically, the ABC format lends itself to a thorough examination of the complicated contours of Merton’s life and thought. The text is accessible and interesting for children, including young children, and the ABC format allows the book to be read in small sections. While the illustrations are at times somewhat underwhelming, there is something appropriately Cistercian about the simplicity of the art.

The ABCs of Thomas Merton could plant seeds in children that will perhaps flower later in life as they explore and ask questions about their faith. It may be that something from Merton’s life and thought will come to mind later, and he will become for them, as he has been for others, like me, a guide and a mentor. At the very least, the book provides a fine introduction for children and their parents to one of the most important American Catholics of the 20th century.

In my family, we will return to this book frequently. And while my children may never come to appreciate Merton as much as I do, The ABCs of Thomas Merton may help them understand more clearly why their old man keeps taking them to the woods of Kentucky to go hiking with monks.

This article also appeared in print, under the headline “The Monk’s Letters,” in the October 30, 2017, issue.