A defense of ‘The Little Hours’: Finding grace in vulgarity 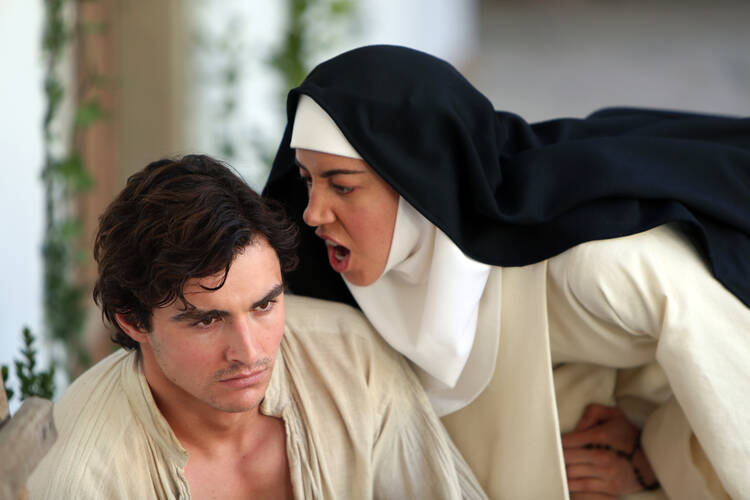 The weekend after I was ordained a priest, one of my relatives asked me if I would finally feel compelled to stop cursing. I said “no” twice, sandwiching the world’s most versatile (and overused) four-letter word in the middle, just to underscore my resolve.

This weekend “The Little Hours” hits theaters, and a torrent of f-bombs will shatter the prayerful silence of a rustic convent in Italy. We have already reviewed the film here at America and, yes, we have laughed along with the crowds. It is based on a few of the stories in The Decameron, a collection published in the 1300s, so the underlying material is hardly groundbreaking.

This weekend “The Little Hours” hits theaters, and a torrent of f-bombs will shatter the prayerful silence of a rustic convent in Italy.

I thought the movie was raunchy and amusing, but I am not defending “The Little Hours” because it is a funny movie. I am defending it because its release and the religious conversation around it are great examples of our need to counter the impulse to assume that all religion or depictions of religious people must be pure, clean and undefiled. The characters in this movie are a hot mess. Pretending that this is not funny gives the dangerous impression that vulgarity disqualifies an experience from getting near the mysteries of God. The sad result is to keep religion and religious experience out of far too many conversations.

Even though most of the energy in the film is spent trying to bed Masseto (Dave Franco), a young man hiding out with a group of nuns, the film manages to stumble on a few important themes. At one point, after a drunken sexual fling in her room, Sister Ginerva (Kate Micucci) asks Sister Fernanda (Aubrey Plaza) if what happened between them that night meant anything to her. Without even a moment's hesitation, Sister Fernanda says no. The confusion on Sister Ginerva’s crestfallen face says it all. Can something that seems profane be saved? Is it worth trying? Do her feelings matter? Can multiple things be true at the same time? Could Sister Ginerva be in love, in vows, in sin and experiencing grace all at once?

If religious people get hung up on the cursing and the sex, we are missing an opportunity for conversation.

Our experiences are contradictory and confusing; from this perspective “The Little Hours” is actually better than most of the sentimental schlock that has been properly sanitized for church consumption. Too many religious films aim for depth but never get there. They miss the mark precisely because the process of cleaning them up for church groups robs them of authenticity. Jayme Stayer, S.J., has pointed out this problem in poetry: “While an uncensored attention to the human experience may lead to blasphemy, by contrast, avoiding the messiness of the human experience results in sentimentality.”

It is worth risking a little blasphemy to get in touch with how we actually feel rather than how we have been told to feel. When a film starts to tell me how and when I should experience God, it tramples on my own experiences. That is the risk of entering into a relationship with God. None of our lives are perfect. Throwing ourselves at the mercy of God should feel risky.

So while some people will latch onto the vulgarity and dismiss “The Little Hours,” I think that is a dangerous temptation. If religious people get hung up on the cursing and the sex, we are missing an opportunity for conversation. We are setting ourselves up to live in a sanitized cultural ghetto filled only with films like “The Shack,” “Heaven is for Real” and “God’s Not Dead.” We will be talking only to ourselves, rather than engaging the real experience and confusions of our time. People honestly believe vows of chastity are crazy. I hear it all the time, and it is worth discussing openly and honestly because no one lives those vows in a sentimental, sanitized world.

The characters in “The Little Hours” are hypocrites; they are confused, they are vulgar and they are used to shock us into laughter. And at the same time, the movie has some genuinely touching human moments. The movie and its characters are like most of us: messed up and banking on the fact that someone, somewhere might have mercy. That is one hell of a risk.

Eric Sundrup, S.J., is an associate editor at America.

What percentage of America articles not attacking Trump or Republicans are about sex? Are the Jesuits hung up on it?

I disagree with the author. Those drawn to the Light in their journey of faith will not see Light in Christians who, trying to "relate", act as in the Darkness. Throwing around the f-bomb to those seeking to see God (and other behaviors) is not "making every effort to be found without stain or defilement" or making sure what we do and say "does not grieve the Holy Spirit". Jesus related to sinners by being Holy... and showing them the path to Life.... not by participating with them to be cool. Please keep your focus on the goal.... leading others (by example) towards Jesus and Salvation.

When you took your first vows and when you were ordained a priest
you made a promise to do your best to imitate Christ. As Saint Paul
reminds us - "It is Christ Jesus who lives in you now..."

That you like to say vulgarities and off-handly dismiss them as you
did in your "No - F - No" remark is sad. Surely you can do better, if
only not to shock the pious among us and for the sake of your own soul,
or do you intend to swear in Heaven ?

Can you explain why most of the pictures of Jesuits in America
show them not in their clerics - how worldly do the Jesuits seek to be ?

As for the film - "Little Hours" - give me "Monsignor Quixote"
any day or night of the year.

The secularisation of the Society of Jesus into the Society of the "Hip and With It"
is beyond poignant. If you goal is to be a social worker then be one, but if you goal is
to be minister of Christ then put on all the armour of God and accept you are not to
be a part of secular culture but a mirror that reflects the light of salvation unto the world.

I mostly agree with Fr. Sundrup. Like when he says, "It is worth risking a little blasphemy to get in touch with how we actually feel rather than how we have been told to feel." I'm no fan of vulgarity, having grown up in the pre-Vatican II church when the Index was still shaping our lives. Yet, vulgarity we will always have with us, and it often lurks just below our passive-aggressive personalities. We need to behave ourselves, of course, but we also need to have compassion for those whose main purpose may be to serve as a bad example.