Laughing at flawed nuns and priests in "The Little Hours" 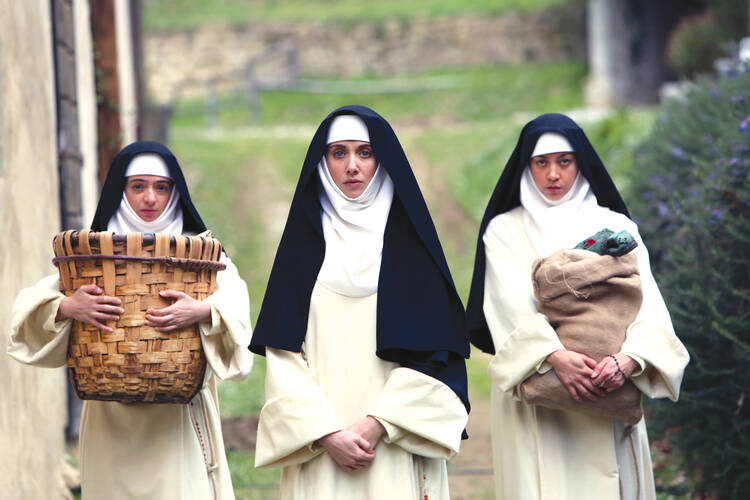 Lunigiana, Italy, 1347: A young nun, wearing a habit customary in the 14th century (or the 1950s), leads a donkey by a rope through the countryside. Mayflies and mist diffuse the morning light; a flute song can be heard, as if from the trees. The one nun is joined by others. They are greeted by the laborer who works at their nearby convent.

The gentle sisters? They respond with a torrent of abuse, vulgarity, profanity and vitriol that erupts out of their wimples like hot ash out of Etna.

It is, we are ashamed to say, hilarious.

Why is it so funny? Well, for a couple of reasons. Surprise and outrage are two of the basic tools of comedy, and no one expects these sweet-looking sisters to sound like sailors. Or to scheme like witches. Or to lust after a supposed deaf-mute who is actually the runaway lover of a local nobleman’s wife—a nobleman planning unspeakable revenge on the handsome young rogue. Meanwhile, the sisters talk among themselves like millennials who have lost their cellphones.

Much of “The Little Hours,” directed by Jeff Baena (who wrote “I Heart Huckabees”), is the humor of anachronism. Casting Fred Armisen (“Saturday Night Live,” “Portlandia”) as a medieval bishop named Bartolomeo? You don’t even have to show him. In fact, as readers familiar with Armisen have probably realized, I have already ruined the entire joke.

Many readers will also have realized by now that the film is based on “The Decameron,” a classic of Florentine literature, a landmark of naturalism and a collection that even at the time of its writing was a provocation. Conceived just as the Black Death was reaching what would someday be Italy, it comprises 100 tales told by seven people who have fled the plague and are regaling each other with tales the way Scheherazade amused her king, or Chaucer entertained medieval England. It is worth noting that the director Pier Paolo Pasolini’s 1971 “The Decameron” was part of his “trilogy of life,” which included “The Canterbury Tales” and “Arabian Nights.”

One wishes “The Little Hours” was a little funnier, maybe a little more pointed in its send-up of hypocrisy and corruption.

It is also worth noting that Pasolini included the same episodes that occupy the mind of the director Baena, namely the ones about nuns and priests and sex. But Pasolini was a provocateur by both nature and intention, and a highly politicized artist who strove, like the 14th-century writer Boccaccio, to reconcile his Catholicism with his nature. No one will accuse Baena of trying to make a heavy statement. But neither will anyone accuse him of emulating a film like “Virgin Territory” (2007), a direct-to-DVD romp that went to “The Decameron” strictly for the clerical, uh, romance.

At the same time, one wishes “The Little Hours,” which co-stars Aubrey Plaza, John C. Reilly and Molly Shannon, was a little funnier, maybe a little more pointed in its send-up of hypocrisy and corruption, and less interested in outrage for the sake of outrage. Years ago, when David Lynch’s “Lost Highway” was in theaters, a print ad quoted the film critics Siskel and Ebert. “Two Thumbs Down!” it read, followed by the distributors’ note: “Two More Reasons to See ‘Lost Highway’!” Similarly, the trailer for “The Little Hours” quotes the Catholic League: “Pure Trash!” it calls the film. I do not know how pure it is, but we agree the filmmakers are ’ intentions are probably not of the highest of callings.

Speaking of callings—no one in the movie seems to have one, which could provide the filmmakers an alibi, should they be asked to repent. The young nuns—Alessandra (Alison Brie), Fernanda (Aubrey Plaza) and Ginevra (Kate Micucci)—are living the monastic life because that is what their parents decided to do with them: stick them in a convent. (Ginevra, in fact, seems to be Jewish.) The older people, Father Tommasso (Reilly) and the Mother Superior (Shannon), have their own problems, one of which is being in love with each other, but the young women are all captives, more or less, and subsequently act out in ways unbecoming to an order, a church, or a faith. When they drive out the poor day laborer with their abuse, Father Tommasso hires on the hunky Massetto (Dave Franco), who has been forced into hiding by the enraged cuckold Lord Bruno (Nick Offerman). That Massetto is supposed to be deaf and mute leads to all manner of situations that were old when “I Love Lucy” was a baby, but the fact they have been translated to pre-Renaissance Italy gives them some panache. I guess.

“The Little Hours” is occasionally laugh-out-loud funny, and what helps make it more palatable than it might have been otherwise are the performers. Plaza, who is also a producer here, helped make “Parks and Recreation,” at its peak, one of the better TV comedies ever. Her well-defined, perverse-for-the-sake-of-it persona is kind of irresistible. Reilly is his usual comically laconic self; Shannon is good, too; as Alessandra and Ginevra, Brie and Micucci are alternately appalling and charming.

The “shtick” of “The Little Hours” is, as we said, the anachronistic surprise: Someone, for instance, has “cooked the books,” at the church, which probably was not a catchphrase back in 1300s Lunigiana. And the unbridled lust? Well, “The Decameron” was hardly gateway literature: Flawed humanity existed before it, and after. No one needs “The Little Hours” to shock them with the news that people are often comically weak. Or, for that matter, weak enough to laugh lustily at “The Little Hours.”

I often scratch my head and wonder why women religious in fiction are derided, demeaned and hated. It is because the people creating these characters find it is a okay to bring out the misogyny that is supposed to otherwise be hidden. The woman who lives without "need" for a man is looked at with suspicion and hatred. The person looking doesn't know quiet what to do when confronted with a woman who is strong, confident and dedicated to something that is not a man so she is derided and depicted as a thing to be mocked. It is easy enough to see through this, though, and to realize that ultimately, it is that age-old, now out-of-fashion, but sometimes-possible-to-slip-in-anyhow fear and contempt of women that causes the scorn since this "other" seems a safe target. I sigh with annoyance and pity for the people who don't actually know women religious. Women's stories speak for themselves and they really have nothing to prove to you or me or anybody else in the meantime. This movie, like so many others, will run its course and be forgotten about within a few years while the good work of real life nuns will continue for a long time.

Is it necessary for America Magazine to review films like this.
Are you encouraging faithful Catholics to go see such trash ?

Are we to say that an adulterer is a "handsome young rogue" and
give the sin a "wink-wink".

Pasolini was a disturbed genius, but he sought to create actual art.
This film is mediocre and soon to be forgotten. Why we should even see
a review that says it will lead us to "laugh lustily" in America magazine
makes me fear for the salvation of the editors.